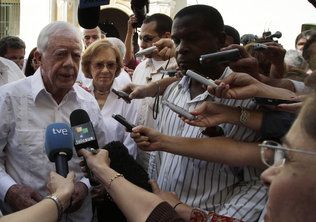 The former U.S. president, Jimmy Carter made a short but varied three-day visit to Cuba on Monday, March 28, 2011, in response to an invitation from Cuban President Raul Castro. He was greeted at the airport by Foreign Minister José Martí Bruno Rodriguez and diplomatic officials from Havana and Washington, respectively. That same day, the former president met with the Jewish community and with Cardinal Jaime Ortega y Alamino, Archbishop of Havana.

He came to our country with his wife Rosalynn, who was in charge of Cuba at the White House during his presidency (1977-1981), and directors of the Carter Center, which is based in Atlanta, Georgia. It was during his term in office, that diplomatic missions were restored in both cities and travel opportunities opened up for both peoples.

He came this time, after the Havana Provincial Court, on March 5, sentenced the U.S. citizen Alan Gross to 15 years in prison for “acts against the independence or territorial integrity of the state.” The wife of convicted Gross met with Jimmy Carter, who had traveled to North Korea last year and managed to secure the release of an American citizen; Gross’s wife hoped he might intercede to get some kind of parole for her husband for humanitarian reasons. Carter denied he was in Cuba for that purpose, although he acknowledged that he talked about the Gross case and said he wants to help improve relations between his country and Cuba.

This visit, similar in profile and tone to his previous trip in 2002, had among the objectives of the former head of state and Nobel Peace Prize laureate a chance to exchange views with Cuban leaders about the Communist Party Congress to be held April 16-19, and about the proposed economic reforms carried out to save an economy that is so close to bankruptcy it may soon be finished.

Carter, 86, is the top U.S. political figure who has visited Cuba since 1959. The former president met with prominent people from the alternative civil society such as the famous blogger Yoani Sanchez and well-known Claudia Cadelo, as well as recently released former political prisoners and their wives, the Ladies in White, and traditional dissidents such as Elizardo Sanchez and Oswaldo Payá.

Yoani Sanchez — the Cuban blogger who has received so many international awards for her blog “Generation Y” — explained that at the meeting she expressed to Jimmy Carter our need for freedom of expression and free Internet access for Cubans, which we promote and encourage from our blog with its banner supporting that demand.