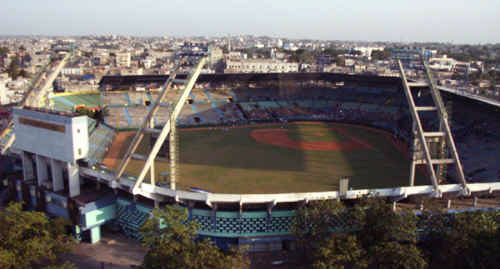 Josefa Caridad Contrera Mequeira, mother of 16-year-old twins Yoan Damián and Yordi Emmanuel Pardo Contrera, seeks clemency from authorities. The adolescents have been detains since last February 1st, after an altercation between players on the teams Industriales and Pinar del Río in the stadium Latinoamericano in the capital, which unleashed a violent reaction from the spectators.

The Havana team’s pitcher Odrisamer Despaigne, physically and verbally attacked runner David Castill, of the Pinar del Rio team. “Both were expelled, setting off a lamentable and enthusiastic reaction from the public,” reported official journalist Sifredo Barros in the newspaper Granma on Feb. 2, 2012.

Furious spectators threw stones at the Pinar del Rio team bus. Police from the 4th unit of Cerro, controlled the situation with dogs and sticks. According to the mother, the twins and their friends were left stunned, and took several steps backward, in front of the police line.

The youth’s intentions were misinterpreted. “Where are you running?” asked one of the officers, as he approached the side of Robín, a friend of the brothers. Without listening to his explanation, he took hold of his arm and lifted him into the police car.

Yordi Emmanuel tried to explain that they were doing nothing. The officer grabbed him, another struck him on the back with his stick, and a line of officers slapped him as he want to the police car. His brother voluntarily joined the group of detainees.

The event resulted in 62 arrests; three days later, the number was reduced to 6. Four are imprisoned, hoping for justice, accused of disorderly conduct, including the brothers.

Contrera Mequeira feels cheated. Captain Yuniel Batista, of the penal instruction unit of Acosta in 10 de Octubre, assured the detainees’ families that they would be released soon. He also told them it wasn’t necessary to hire an attorney.

Days later, he informed them that the local prosecutor would take them to court and that they should seek legal representation. However, he told them again not to worry, because disorderly conduct is a minor infraction.

If found guilty, the brothers could face loss of their freedom for up to 3 years and a fine up to 50,000 pesos. They could also impose other penalties. Although both are students and don’t have prior convictions, the authorities failed to grant them bail, and keep them shut in a prison for youth in the city of Cotorro.