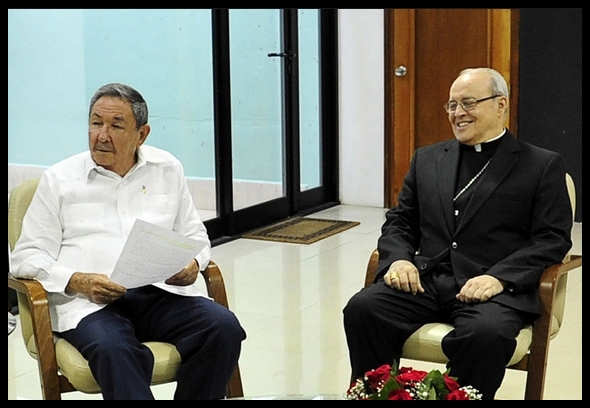 Authored by Angel’s Editor, 4 April 2015 — But you are not one of those worthy men who serve a prison sentence in Cuba for raising his voice against the abuses of the dictator. You are a prisoner of conscience, because your conscience is not free; it is a slave to the designs that Raúl Castro has imposed with shady negotiations, even on institutions such as the Church, which should be watching over Her sheep, as Jesus did, and not being an accomplice to a dictatorship that works against everything established by that God Whom you claim to represent in Cuba. Your soul was kidnapped by your cowardice before the pressures of the dictatorship, and since then you live as a prisoner of that double morality wielded every day by those who live off the pain of the Cuban people, and the economic, social and ethical destruction of a nation like Cuba.

You, who were a victim of the sinister UMAP*, can you admit for once what secret about you the dictatorship keeps so well, the one that makes you tremble and obliges you to maintain that complicit silence and to cover up the truth with pious and patriotic arguments of a shameful falsity?

How can you pretend to represent a God upon whose commandments you spit every time you don your sacred vestments to speak in the name of a flock — the Cuban people — whose pain is clearly alien to you?

You shall love God above all things. Does he love God who in His name has betrayed his compatriots by endorsing tyrants who continue to misgovern for almost 60 years, all because he lacks the courage to rebel, as did worthy representatives of God in Cuba in the past – whom, certainly, you censured, pressured, and “relieved” of their clerical duties for fear of the dictatorship, and to preserve that position of privilege that allows you to live as only the Castro regime nomenklatura live?

You shall not take the name of God in vain. Is not using your priestly investiture to position yourself against millions of compatriots taking the name of God in vain? Delivering pious speeches in the name of God while the prisoners during the Black Spring of 2003 were being deceived, lying to them about the true conditions under which their exile in Spain would occur? Maintaining a shameful silence about the real reasons that provoke hundreds of Cubans fleeing Cuba to be devoured by sharks in the ocean, while dirty deals are made with the dictator, begging for the spaces which the Catholic Church never had to beg for in the history of Cuba? This, Cardinal Ortega, is taking the Name of God in vain.

You shall keep the holy days. Maneuvering the sacred festivals to serve as a legitimate discourse for your masters, the Castro dynasty, and using these festivals to give deceitful sermons, designed to calm the evermore rebellious and nonconformist spirits of Cuban Christians, is a sacrilege  for which you should answer before your God and before the people who today witness your outrageous servility.

You shall honor your father and your mother. Your parents, who surely bred in you (or tried to) the sacred principles of the Christian faith, must be turning in their graves with shame, horrified, as they contemplate how their son, in the name of those values, behaves like a puppet at the mercy of the assassins and torturers of our native land.

You shall not kill. You have stained your hands with blood when you are complicit with the rhetoric with which Raúl Castro’s government hides from the world the constant repression that imprisons those who dissent; beats those who resist the outrages of repressive forces; executes those who have rebelled; eliminates via “accidents” the most popular leaders; and casts Cubans to a certain death in that sea that shelters the remains of more than 20,000 Cubans who drowned or were devoured by sharks during these last 60 years of dictatorship.

You shall not commit impure acts. The impure acts, those that you say you committed and that were the cause of your incarceration in the UMAP, are as dirty and perverse in the eyes of God as betraying those opponents who sought and continue to seek shelter in your church from the thugs who, because of your cowardice, manage to beat and jail them. Dirty and perverse acts are also keeping silent and remaining obedient before the brutal beatings of the noble Ladies in White, and before targeted killings, such as of Laura Pollán and Oswaldo Payá, among so many others. It is impure to feed oneself as the people cannot, to travel as they cannot, to live as they cannot.

You shall not steal. Do not forget, Cardinal Ortega, that making a living from the robbery and theft that the dictatorship has perpetrated against 11 million Cubans, and trying to disguise with soft words the hard reality lived by the people, who continue to be looted to this day in the name of changes that only seek to perpetuate power in the very robbers’ hands: that, too, is stealing.

You shall not bear false witness. Although the most recent lie is saying that there no longer are political prisoners in Cuba, enumerating your many lies throughout so many years of your ministry would produce a book as long as the very Bible.

You shall not allow impure thoughts or desires. Leaving aside the rumors that have always existed about your carnal immorality, have you at any time tried to explain to the dictators and their paid assassins that physically and sexually abusing the defenseless Ladies in White violates this commandment of God? Have you raised your voice to denounce the sexual abuses that are committed against the opponents of the Regime in Cuban prisons? Have you told your masters, the Castro dynasty, that because of the economic, social and moral impoverishment caused by the dictatorship’s appalling management they are the only ones responsible for the thousands of rapes and suicides that happen every year in Cuba?

You shall not covet others’ goods. You and your spiritual colleagues have been delighted, euphoric, applauding like trained seals, when the Regime announced that it would start to return the Church’s property. And that brings up a question: How many times did you ask your Commander-in-Chief, or his brother Raúl, to restore the property stolen from the people? How many times did you ask that they return the property of those Cubans who were despoiled simply because they emigrated? How is it possible to celebrate that they are returning some property to the Catholic Church, in exchange for its domestication, while hundreds of thousands of Cubans who are Christian live in crowded and unhealthy conditions, barely surviving in a country literally in ruins?

Cardinal Ortega, have you lost what few traces of shame remaining in you, to be capable of sustaining the lie that there are no political prisoners in Cuba, when institutions and opposition groups that you know well have denounced to the world the existence of political prisoners and, even worse, that every month new names are added to those lists? 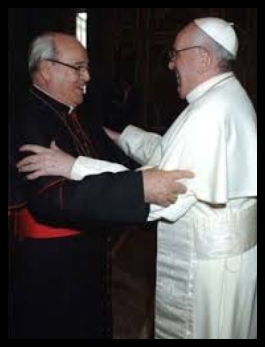 I remind you, because I know that you know very well, that even the world leader of the Church you represent in Cuba, Pope Francis, knows about the case of Ángel Santiesteban-Prats, a prisoner in Cuba for having raised his voice against the Regime in his blog, “The Children Nobody Wanted.” His Holiness has received by multiple channels the documentation that shows that Ángel Santiesteban-Prats is a political prisoner, that he has been thrown in prison under a judicial farce for common crimes, as the dictatorship is doing recently with the opposition. Although the Cuban Commission on Human Rights and National Reconciliation has for two years left off the list, inexplicably, the name of this prize-winning writer, Ángel’s proven innocence makes it clear that his case is also political. His Holiness Pope Francis, furthermore, knows perfectly that the list of political prisoners in Cuba duplicates the list that the Vatican prepared for the exchange of the convicted assassins in the United States.

We are aware that neither you nor your two bosses (that of the Cuban government and that of the Vatican) have the least interest in restoring freedom to the more than 50 political prisoners who rot in the Cuban concentration camps, but, at least, now that nothing will be done for anyone, have the decency to keep your mouth shut.

*Translators’ Note: UMAP – “Military Units to Aid Production” — was a network of concentration camps for “counterrevolutionary elements,” including homosexuals, religious believers and others.