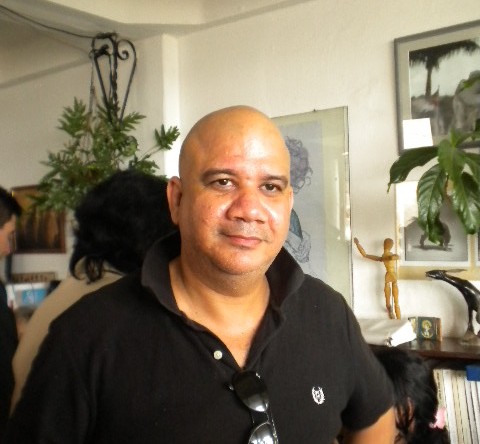 Just over 60 days ago Juan Juan Almeida started a hunger strike. His, in some ways, is the most solitary of strikes. It is true that many of us bloggers and his other friends have been aware of his condition and have followed the long-running saga of his pursuit of an exit permit to allow him to get treatment, not available in Cuba, for a severe health problem; it is also true that several digital sites have published his trials and tribulations (including his arrests) as he constantly pressures the authorities and demands his right to travel, to be reunited with his family, and to receive on-going treatment for his illness. But regardless, public opinion has not been sufficiently mobilized.

Reflecting on the crossroads where Juan Juan finds himself, I think of how difficult it is in his case and the stigmas he is burdened with at a time when he so greatly needs to rally support. First, because his fight, placed within the contours of a personal drama, lacks the heroic elements traditional solidarity demands; his dispute, according to some of the more ignorant, is not for Cuba and Cubans, but only to resolve a personal problem. Why don’t we just describe his drama as that of any Cuban, and therefore, of all Cubans. Second, because the most well-known and far-reaching of the international media pay attention to someone whose huge mustache or quantity of body-piercings earn them a Guinness record, but not to the tragedy of a lonely man who launches a desperate appeal to defend the right to freely leave and enter one’s own country. Third, the greatest stigma, is because JJ – as many of us call him – is the son of the Commander of the Revolution Juan Almeida Bosque, which brings with it a strong prejudice: being one “of them” and having enjoyed benefits and privileges that the most of us do not, he “deserves what happens to him.” A pattern repeated over and over when I’ve expressed JJ’s dilemma among friends, as if being born to someone in particular entails a curse, as if to each of us our parents were not always loved and lovable, or as if the coincidence of not belonging, as a birthright, to the anointed grants us some certificate of moral purity, without “the children of so-and-so” hanging over our heads.

For my part, I think it is precisely his origin that makes his struggle more difficult than mine. His rupture has been greater and the cost of his daring higher. From my vertical dissent I have not lost even one friend (in fact I have gained many new friends); I have had no ruptures nor family resentments, no one has separated me from my loved ones (neither living nor dead), nor have I suffered any rejection. This has not been true in his case.

I prefer to see JJ in another way: not as the privileged person that he’s not, but as another of my companions along the way. I choose to strip the name and pedigree from this man and see the human being who lacks the same rights we all lack on this Island – and as even some do who are outside of it – including the greatest right which is Freedom. This is a sick man who, thanks to his many friends who love him (but no thanks to the Revolution which, for some reason, detests him… and that makes him good in my eyes), has the chance to improve his health outside of Cuba; but the government prevents him from traveling and condemns him to die. This is a man prevented from being reunited with his wife and daughter for having committed the incredible sin of writing a book where he says what he knows, what he believes and what he thinks about certain topics that discomfort the warrior oligarchy, the master of all our fates. I choose to stand by this human being in whom I recognize so many gestures of solidarity toward others and toward us, the disobedient ones, with whom he has cast his lot.

Since August 10, 2010, Juan Juan Almeida has been hospitalized in Havana. His health has deteriorated and his body has been debilitated by the long fast. His demand to leave Cuba has ceased to be an individual claim; and although JJ himself has no pretensions of leadership or of carrying the flag, today he claims a right for all Cubans. We must not leave him to do it alone.