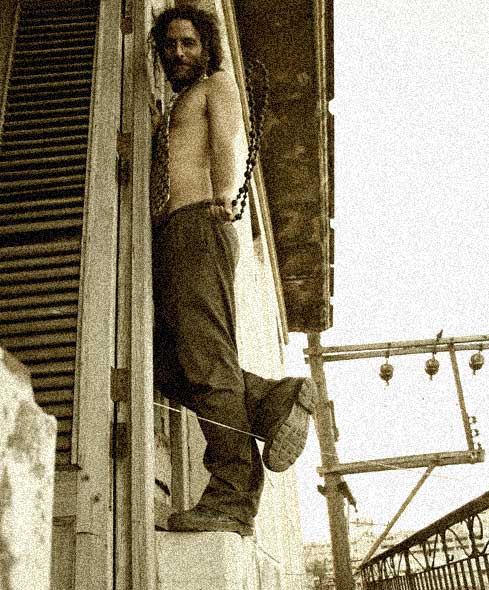 Nostalgia for the life lived or maybe not so much.

Nostalgia for the people who slipped like water through our fingers with the change of the century and the millennium. All magnificent, all beautiful human beings, memory erases the landmarks or makes them desperately breathable.

Nostalgia for the limits we then imagine, as an antidote to our big fear and our not small mediocrity. We were never us.

Nostalgia for a biography that no one fully has yet, in Havana as in the exile.

Nostalgia for the biology that is already betraying the bodies and minds of our generation, orphaned by revolution and aborted by capitalism

Nostalgia, in the ultimate instance, for the Biology Faculty, splendid mass of the morning classrooms in one of the most unforgettable streets of the world: Number 25 in the foothills of El Vedado.

Nostalgia for the Republican desks where we met Biochemistry in 1989, when Cuban generals died and the survivors censored Soviet publications, while the civil collaterals emigrated en masse after being expelled from their jobs for saying out loud what the repressors were thinking.

Nostalgia for a time of harsh light but not as extreme as the vacuum that swallowed the years zero to two thousand.

Nostalgia for a major that, before entering the university, sounded to us the most complicated on planet Earth: Biochemistry.

We had everything Geniuses imported from vocational schools, today promptly exported to the First World. Stalinists that became democrats. Homeopaths. Mystics. One writer who even fell into the webs of the savior Redonet. Most noble peasants. Scramblers for scholarships. Solemn brutes. Congolese of princely lineage. And other unpronounceable nationalities. Returnees from nuclear careers in a disintegrating socialist camp. Closeted gays. The most apathetic (and sympathetic) militant Communists from Carlos Marx. Also potential suicides (someone who took the dogma of toxicology too seriously: there were no toxic substances only toxic ways of using them…) People who broke their sanity (someone who wiped away tears, on saying goodbye on the grand steps, with a psychiatric certificate that looked like a doctoral thesis). And also unpaid murderers (someone who killed his partner very early while in vacation in the province).

The Biology Faculty was like a cubist apple. A drawer full of sharp art-deco corners. Shade. With a family home not evicted right in the parking lot. With the scent of solutions received in apothecary jars from the colonial era. With magisterial professors, especially in the right wing of the fourth floor. A prodigy of enthusiastic speakers with eons of experience and textbooks donated by students who deserted, discretely, every time they got a scholarship abroad.

Two decadent decades have passed since then. All, in our peculiar way, we have triumphed here or there. We have all run incredible risks that with the passing of time sound ridiculous. We all love a puzzle of hearts that in the end, clearly, returns us home alone. I could pronounce their names, but they’re stuck in my throat. What’s more, almost all have children with perfect strangers. The others, the sterile, we won’t have even time.

Today we never communicate. What is known, is not said. The truth is totalitarian. Back, inside or outside, a decrepit youth was left in Cuba. We had to look further down to avoid dying of sadness, in the generations that followed us ten or fifteen years difference, little people who arrives as infants in the Special Period and who never hear Fidel speak live.

We are in the summer of 2012. Everything remains just below the DNA, as secret as a deadly gene waiting to detonate. Everything remains soft, intangible, like the looks of the boys and girls that we embarrass then before the table of vital amino acids, in a plagiarized book whose prologue accused him of having ideological problems.

But nothing returns.. We are dull. We are going to die without anybody to count on, without even crossing our e-mail. Without specifying the price of bread with orange paste at the cafeteria in the basement, where the smell of corpses from the Calixto Garcia Hospital was not enough of a symptom for us to wake up. Without reviving the morning guards, between the drinking of the neighbors where the name of Isolina Carillo was shouted in the building next door, down to the silence of the end of an era in which Havana dawned in those years of the nineties (there were no others). Without I don’t know what.

Nostalgia for life unlivable or maybe not.

Nostalgia for people we won’t get back, not with the thought (the hope is that death is a dream more generous than the restless dozing that we butchered between the stock of jobs in perpetual exile and the perpetual political police here. All resplendent, impeccable, making us want to jump naked on the mass of angels and ask them not to move from there: so emaciated and exceptional.

Nostalgia for what we imitate rather instead of implement in our imagination (like universities, we never had a common cause to defend in the face of society: that is what the Latin American left do not understand unworthy or indigenously of Cuba).

Nostalgia for nostalgia that since then we uninhabit, animals outside of an inopportune state.

Nostalgia for the biology that ran out or filled with untranslatable mutations.

Nostalgia, in the first instance, for the Faculty of Biology and it cloisters of granite and their antediluvian librarian.

Nostalgia for certain colors and steps from where we launched the world in 1989, when Panama fell on its ass toward freedom and the next Cuban foreign minister gave his first spins on the asphalt because “what doesn’t jump is a Yankee” (clowning around as governance).

Nostalgia for a period in which they killed and died “by iron”, as the current Premier said in the cemetery (hemoglobin iron, it is understood).

Nostalgia for the career that, after leaving the university, still sounds to us like the most loving of Planet Earth: Biochemistry.