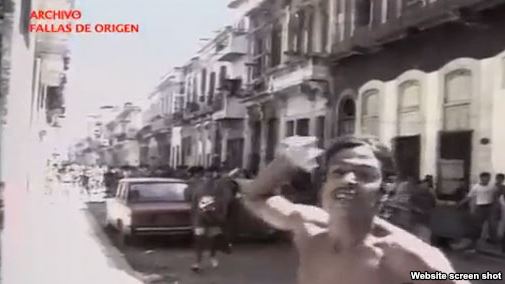 1994 began with uncertainty and ended in despair. A number of astrologers were in agreement: there was reason to believe something unusual would happen later that year. This was partly due, they said, to increased solar activity. In early August large solar flares occurred.

Aside from the considered opinion of those who can see everything in the stars, it was the year in which Cuba reached the low-point in the economic decline that had begun with the fall of the Soviet bloc in 1989. The crisis was exacerbated by several factors including a sugar harvest that barely amounted to four million tons and an unfortunate but predictable outbreak of polyneuritis, which forced authorities to make vast financial expenditures.

The underground economy saw record numbers of transactions, comparable to state retail sales but with prices that were twenty times lower. As a result of financial imbalance, budget deficits and excessive monetary liquidity in the hands of consumers, life in Cuba became a continuing drama, making novel attempts to flee the island illegally — the “13 de Marzo” tugboat incident and the launches from Regla and Casablanca being two examples — quite common.

The government realized this was a time bomb on the verge of detonating, leading either to a new stampede from the island or a widespread revolt. Therefore, to increase morale within the military, a series of promotions was announced on June 6 of that year.

But by August Havana had become a sweltering city, with the sea breeze serving as the poor man’s fan. On August 5 around twenty young men were sitting on the sea wall along the Malecon at Puerto Avenue near Cuba and Chacon streets. Perhaps because they were poor or perhaps because some of them were black, the men aroused suspicion.

Trucks carrying members of the special brigade appeared and began harassing the youths. Exhaustion, hardship, rage and even longstanding grievances led to an explosion of civil disobedience. The men gathered there responded by marching down the street en masse and shouting, “We’ve had enough” and “Down with Fidel.”

Others joined them, and then many more joined those. It was not an anti-social riot carried out by criminals; it was a spontaneous popular reaction to circumstances, which was repressed with perverse excess. The reaction by the Cuban government was brutal. It counter-attacked from all sides.

Using force, trickery and bloodshed, it confronted groups of Cubans, quashed the protest and infiltrated the demonstrators’ ranks, casting a chill over libertarian bravado.

The police made a public show of force. Helmeted riot squads with shields and combat vehicles patrolled the streets of Havana, especially those in the Old Havana, Guanabacoa and Tenth of October neighborhoods. The assassins of law used the technology of enforcement to threaten everyone, leaving the city’s population with a somber, frightening and discouraging vision.

In the national media everyone was forced to publicly repudiate what was being called “the events of August 5.” They had to cheer even when there was no reason to do so. But what few of them realized was that a plan had been put in place to “safeguard the physical well-being of the leaders of the revolution.”

Yes, those khaki-clad men who grew old repeating the spurious slogan “To defend the revolution to our last drop of blood” had an evacuation plan for such contingencies. It involved gathering their families together and heading not for the frontline but for the front of the plane where, instead of trenches, there were comfortable seats and flight attendants serving champagne.

I know this because on August 5, 1994 — even before the sun had fully risen in the sky — I received a short phone call from a security officer asking me not to leave the house. Five minutes later my father’s chief bodyguard, Raul Romero Torreblanca, showed up and told me gather essential items because they would be coming by to pick me up. There was no explanation.

Doing otherwise was not an option. For many years Cuban officials (the most high-ranking) were asked to identity key family members and, even though I was no longer to the liking of the top leadership, my name still appeared on the list my father had drawn up.

Asking around, I discovered that not all the leaders or their family members had gotten the same call, or comparable instructions. As my grandmother used to say, “Those who steal always lie.”