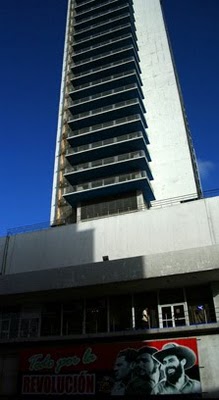 THE BLUEST CORNER OF THE FIRST WORLD

For August 13, the first ten years without my dad.

Since I was a child I’ve lived in a neighborhood on the outskirts called Lawton. I am the “only child of older parents,” the reason why we barely went to the city center.

In the ’70s Cuba held the First Communist Party Congress (it was already obvious that Fidel Castro would be an eternal entity), and, despite what they say now about that decadent and institutionalized decade, the truth is that I lived in a domestic paradise of two workers as poor as they were in love: María del Carmen y Dionisio Manuel, the best parents in the world.

I never thanked them for giving me the illusion of a childhood.

One day in 1978, they decided to take me to meet the rest of reality. We took several interminable buses and disembarked in our best “going out clothes,” right in the heart of El Vedado: the start of the culmination of La Rampa, 23rd Avenue and L Street (perhaps the L was for Luxury).

It was my father then, who prounounced it, while my mother held my shoulders, as overprotective then as she is today at 74: “Look up, Landy…”

And indeed, there it was. The mass. A needle to tickle the proletarian belly of heaven. A geometric design (distorted by my excitement) that, even to my 7 years, was the perfect metaphor of modernity: a new world, a new tone, a future ignored from our little wood house in far off Lawton.

It was the building with the bluest aura on the planet, whose only difference from the Hilton hotel chain of the ’50s was the sign that I read for myself on its snowy peak: Habana Libre — Free Havana.

The doors opened by themselves. Under our orthopedic shoes, we caressed a pasture of carpets (I had to ask what these fabrics were called). The ceiling of the lobby rose in a dome miles above our heads. The light was nice, but nothing national. The voices of the Cubans also (no gestures or shouting). One breathed in the immaculate peace of this phenomenon always lacking, called air conditioning. The bathrooms were bigger than my house. My father bought a newspaper in English also called Granma and promised to teach me to read the exotic argot of the First World.

In 1978 I was suddenly happy in a hotel inherited by Real Socialism.

From 1978 I was also more and more unhappy, exiled in my own land in the hunt for the Unreal Capitalism of that close contact molded in my memory.

Architecture is, first of all, ideology.

When my father died, that tedious August 13, 2000, I wanted to leave him alone for a while in the ugly Luyano Funeral Home (a former site of the Socialist People’s Party) and visit our hotel for the last time. I wanted to cremate his body (even this was impossible in Cuba) and throw his ashes from the roof of the Habana Libre above the empty vision of a prisoner Havana. I wanted to jump myself over the city after my first 29 years of unlikely life (Fidel Castro was then the age my mother is now: 74).