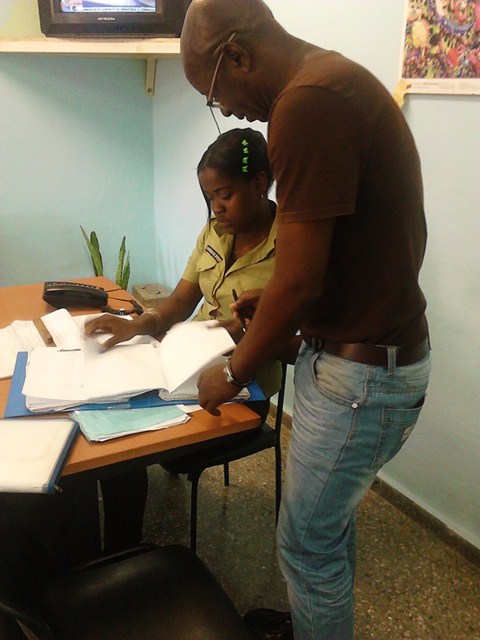 The first time I set foot in that scary place called Villa Marista, similar to Lubyanka Prison in the now fortunately disappeared Soviet Union, it was by my own will. I accompanied Manuel Cuesta Morúa to see Investigator Yurisan Almenares, in charge of Case No. 5, 2014, against Cuesta Morúa, after he was arbitrarily arrested on 26 January of this year to keep him from participating as an organizer of the 2nd Alternative Forum to the CELAC (Community of Latin American and Caribbean States) Forum, held in Havana.

His detention ended 4 days later with the notification of a precautionary measure that was never delivered, but that obliged him to go to a Police Station every Tuesday and sign the document, for the supposed crime of Diffusion of False News Against International Peace.

But the precautionary measure was only shown to the eyes of the person it concerned once: on 30 January when he was released. In practice, Cuesta Morua was signing an unofficial paper. Imprecision characterized the situation from the beginning. The reasons for the arrest and the case they sought to bring against him had no direct relationship, which shows that the old school mafia of the Castro regime still rules in Cuba: studying the penal code in order to destroy their adversaries, manipulating the law until the punishment proves your guilt.

In Villa Marista I wanted to see the face of someone working there inflicting pain on other human beings. Punishing them, not for violating universal law, which could not exceed the measure of punishment, but for not expressing loyalty to the Castro regime.

For some reason I connected with the mother of Pedro Luis Boitel, who I saw in a documentary titled “No One Listens.” She said that her son, having been persecuted in the Batista era, always found a door to knock on, an opportunity to save himself from death. But in the times of Fidel Castro is wasn’t like that, and Boitel died after a hunger strike, imprisoned in the cruelest and most degrading conditions, in La Cabaña Prison.

Those were the times when the International Left granted the Cuban government impunity so that it could improvise a vast record of human rights violations. And Cuban society, terrorized, also looked the other way: escaping to the United States, while “going crazy” to step foot on the land of liberty. It’s not very different today.

Villa Marista is a closed facility. It can’t be visited by an inspector from the Human Rights Council, nor from representatives of civil society organizations–dissident and persecuted–to ensure that they are not practicing any kind of torture against the prisoners and are respecting all their rights. The government has signed some protocols and declares itself against torture, but we don’t believe in the government and those who have passed through Villa Marista’s cells bear witness that they do torture them there to the point of madness in order to destroy the internal dissidence.

And if someone accuses me of not having evidence, I tell them that’s the point, that it is precisely for this that the Cuban government opens its jails to the press, not controlled by them, and to the international inspectors and Independent Civil Society, because what the Castros present is fabricated by the regime itself.

Not only the dissidents are tortured. Nor do we know if it’s only with “soft torture” which is still torture. Also there are workers who make a mistake and are accused of sabotage, without being able to demand their inalienable rights or defend themselves against such accusations.

It made me want to open doors, to be very strong and kick them all down. To find a legal resource for the Cuban people to investigate–and the right to presumption of innocence–all those who work there. Even the cooks, responsible for having served cabbage with pieces of cockroach to a friend’s relative, a simple worker, who was kept there for long unforgettable days, who was interrogated like in the inquisition to extract a false confession from him. They didn’t even let him sleep.

But I have gone only into the reception area: polished floors, plastic flowers, kitsch expression to hide the sordidness of the jailers instructed by the Interior Ministry; the misery reaching into the bones of the prisoners down those shiny floors. Villa Marista is one thing outside and another inside, as the common refrain says.

Investigator Yurisan Almenares didn’t show his face. Perhaps he wasn’t ready for the persecuted to find him. He had no answers because those guys can’t improvise. They have to consult their superiors, not the law or their own conscience.

A smiling captain took us into a little room and explained, almost embarrassed, that the Investigator wasn’t there and she would make a note of what Manuel was demanding. So I watched as she carefully traced the words he was pronouncing.

We wanted to get notification of the dismissal of the case. There was no precautionary measure; ergo there should be no case pending. This not to say that the presumed case was unsustainable without the precautionary measure. Living in Cuba it’s impossible to escape the reality of power, however absurd and Kafkaesque it may be, like kicking the locked cell doors of Villa Marista.

Remember, the crime has a name as bizarre as Diffusion of False News Against International Peace. And the supposed false news deals with the issue of racism in Cuba, where the government teaches discrimination for political reasons in the schools, and talks about the issue of racial rights, not inborn rights, but as a concession emanating from the State dictatorship; and administered so that it can later be used for revolutionary propaganda.

But racism is still here, rooted in society like a database error that manifests itself in daily phenomena that shock the whole world. Growing, along with other forms of discrimination and masked under the cynical grin of power.

Manuel Cuesta Morua knows this because he has dedicated his life to record this phenomenon in Cuba, historically and in the present. Thus, he has written about it on countless occasions and takes responsibility for every one of his words.

We went there without getting answers. My mind filled with the memory of these people I don’t know who are imprisoned there, half forgotten by the whole world, their own attorneys in a panic.

One thing we can promise Villa Marista’s gendarmes and its top leaders, wherever they hide themselves: some day we will open all those doors, and after judging, with guarantees of due process, those who oppress us, the place will become a part of the popular proverbs turning Cuba into a nation jealous of the freedom of its citizens.