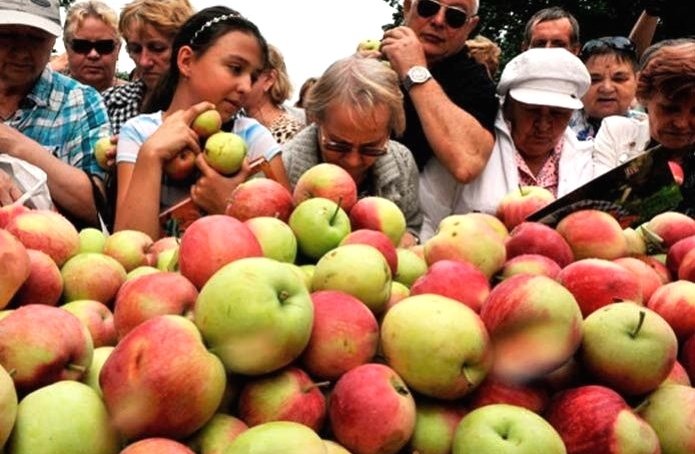 Cubanet, Miriam Celaya, Havana, 28 September 2018 — For some unknown reason, apples have had an extraordinary role in the cultural imagination of the West. For better or for worse, this fruit has marked milestones that have transcended the passage of time and geographical borders.

For example, in Greek mythology, a golden apple sowed discord between the goddesses Pallas Athena and Aphrodite, a discrepancy that would dramatically influence the Trojan War. For its part, in biblical mythology, an apple was the temptation that drove Adam and Eve to the original sin, for which we have all been punished (blessed sin!).

An old Swiss legend tells that the national hero William Tell had to skewer with an arrow, accurately shot from his crossbow, an apple placed on the head of his son by the tyrant oppressor of his people; while another fable explains how the wise Isaac Newton discovered the law of universal gravity, one of the most important physical-natural phenomena, thanks to an apple that fell directly on his head.

The apple is a kind of cult object sown in our consciousness since earliest childhood. What child did not know Snow White’s apple? And, as adults, who has not dreamed of visiting that other “Big Apple”, New York, at least once in his life?

The surprising thing is that in XXI Century Cuba these fruits again have become not only central characters, but in the body of the sin of one of the many sagas of corruption that cross Cuba’s harsh daily reality. In recent days, the sweet apple, or to be more exact, 15 thousand apples, have evolved into a temptation much more dangerous than that in the Holy Scriptures.

The case has been sufficiently disseminated by the official press, but it is appropriate to briefly summarize the facts. It is about the allegedly illegal sale, in a retail market in Havana (La Puntilla market in Miramar), of a large number of apples (15 thousand) to “a group of tough youngsters” – according to an aggressive commissioner (allegedly “an exemplary revolutionary journalist”, in the words of the hand-picked President) which aroused the suspicion of the referred to writer, who, unfortunately for the offenders, personally witnessed the transaction.

For a greater sin, “a good part” of these young people were “uniformed” with the American flag. It would have been better if they wore fig leaves, like the primal sinners of the earthly paradise. The President’s favorite journalist was not going to stand for an insolent provocation, such as that of displaying a symbol of the Evil Empire.

That might explain, far from facing the youths to give them an educational talk and prevent the “hoarding” and “the misuse of state resources”— since the buyers bribed the driver of a state minivan to transport their merchandise – this intransigent revolutionary spied on their movements, followed them, carefully pointed the license plate number of the vehicle that transported the 150 boxes of apples “at 100 CUC (roughly $100 US) each box” (what grief this detail caused the combative reporter!), and demanded a copy of the receipt as proof of purchase from the store clerk. Both photographs, the minivan and the copy of the receipt, were published on his personal blog. (“The …something…pupil”), where “someone is watching” becomes evident).

As a result, sanctions proliferated. Two employees of the store were fired as an administrative measure. Their names were published in the press though they were not subject to criminal sanctions. Some were lectured, and all other members of the collective were warned and reprimanded. As far as some of the aforementioned young apple addicts, they have been accused of “illicit enrichment”, among other causes, have been arrested and must face court trials.

The case is not exactly a novel incident, and it’s not less true that corruption is a scourge which must be fought, has metastasized throughout Cuban society, and now covers all areas of daily life. Corruption has reached such colossal dimensions in Cuban society that it not only touches all of us in some way, but it’s an indispensable part of survival. Given that the system itself generates and replicates it, it’s not possible to eradicate it by attacking its effects, but by eliminating the cause: the system, which is essentially corrupt. Ergo, it’s a problem with no solution.

However, what is more alarming is that the scapegoats are always anonymous people, opportunistic peddlers, marginals of all sorts, mules, the self-employed, or any propitious victim of the social subsoil that the authorities deem handy to use to intimidate the population through a collective lesson.

What the official press does not publish is the most dangerous of the chains of corruption thriving under the protection of official institutions, in particular those responsible for ensuring compliance with the laws: the bodies of inspectors, the national police (including the “revolutionary” also, let it be known) and a bunch of officials available at various prices.

So it goes that, curiously, also around the days of the apples of discord there has been a case of police corruption that, despite the silence of the government press monopoly, is circulating informally through some neighborhoods of the Cuban capital. According to rumors, a policeman arrested one of the many Venezuelan bachaqueros*, who swarm with relative impunity, especially in Old Havana. The policeman seized his merchandise, a backpack loaded with flip-flops. It is worth remembering that in Cuba almost everything is marketable and profitable.

The “cheating” agent, like so many of his colleagues, decided not to report confiscation of the merchandise, appropriating it instead to profit from it himself. However, also like most, he did not have enough smarts to secure his booty. The Venezuelan, meanwhile, feeling injured – or perhaps appealing to the protection he enjoys in Cuba – decided to complain at the Calle Zanja police station, so that when the superiors ordered a review of the agent’s belongings, not only did they find all the seized merchandise in the backpack, but an additional unexpected find: a bundle of marijuana. That sealed the fate of the clueless agent.

According to an informal source and unconfirmed rumors, the Office of the Prosecutor is asking for 25 years in prison for the agent – it has not been made clear if for being an idiot or for being corrupt – and it has not transpired if the Venezuelan involved has received any punishment or if he has been deported to his country.

Very likely, these rumors may contain part truth and a lot of fantasy. But, in any case, the national experience of decades of fraud and corruption, and knowing the administrative mechanisms and government press monopoly’s lack of transparency, everything points to much more reality than fable in this matter.

I have been visiting the blog of the President’s zealous journalist, so combative, so revolutionary, to see what he thinks of such an audacity, but for some mysterious reason he has not published anything about the matter. It must be because the police are also supposed to be a body of “revolutionaries” and one does not air our dirty laundry among members of the brotherhood…