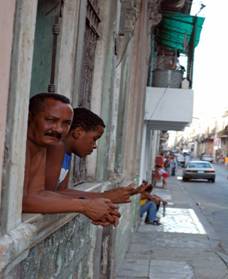 A few days hence will mark fifty-five years of a political, economic and social phenomenon that in January 1959 completely disrupted the fate of the Cuban nation. The so-called revolution became a devolution.

The results, as seen over time, are not too flattering. As well as the divisions and fractures caused to the Cuban family and its dispersal throughout the world, the loss of values — acknowledged by the current president — represents an account balance of which no one can be proud.

If we add an unproductive and inefficient agricultural system, an outdated and primitive industrial base, lack of transport and poor quality of services, including health and education, building collapses or buildings miraculously still standing, the decline in sports, the lack of environmental cleanliness, repression, lack of individual freedoms and many other evils, on balance the results have been negative.

All these absurdities can be summed up in ten words written by José Martí — a man who lived nineteen of the most fruitful years of his life in the United States, writing hundreds of unforgettable pages about that country, which he admired and respected — hours before his death in combat: “I have lived inside the monster and know its entrails.”

These words have been manipulated and used as an anti-imperialist banner. The most hare-brained schemes have been hatched and executed in his name, dragging along a fanaticized people.

Rather than the words of Martí, everything has really been based on the writings of the leader of the insurrection* during its final days when he said, “My true destiny is to fight against the United States.” This highly personal and rather egocentric criteria was the basis for everything that came thereafter, everything for which the entire nation was sacrificed.

Today, fifty-five years after this event, we have in many ways regressed, much has been lost, pain and death have been left in its wake, as though this is something to be celebrated, despite the official slogan “Cuban Festivities.”

The lack of a coherent economic policy and other shortcomings, as well as more instability resulting from decisions that have been made, promise to make every day in the future even more dark and gloomy.

Aware of this reality and trying to fight peacefully for change, I wish my readers a very merry Christmas, a happy New Year and a healthy 2014 in which their dreams and wishes might be fulfilled.

*Translator’s note: I.e. the 1959 Revolution and its leader Fidel Castro