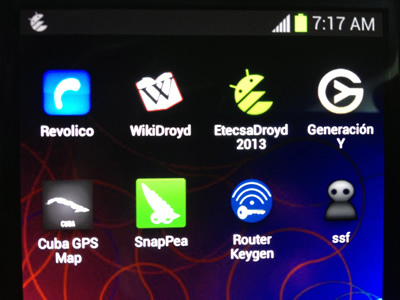 They have graduated from the University of Computer Science or from some other engineering school, but they make an independent living. They are the new developers of applications for Android who are thriving in Cuba. From their keyboards a popular app has emerge with a database leaked from ETESCA, the State phone company called — most appropriately — ETECSA-Droyd. Simply installing it on your cellphone allows you to see the name, address, and even the birthdate of the person calling you. Nobody escapes scrutiny. At your fingertips you have information about a minister, an ousted officials, and the children of the General-President himself. Marvels of the underground, in a country where the forbidden is more and more mixed with the desired and the possible.

Among these young digital natives, the best programmers already have contracts with companies in other countries. They work from home in Havana, Camaguey or any other province, but the final product goes to Tokyo or Paris. These are the most successful. The great majority, in order to obtain this so dreamed of long-distance work, first have to go through a long stage of installing capabilities, at retail, in the telephones of national users. If they’re lucky, one day a tourist may show up who needs their iPhone or Samsung Galaxy repaired. It’s a chance to show off their technological talent and entice the foreign visitor into a partnership agreement or even to get an invitation to go work in another country.

The path of these geniuses can also come with serious setbacks. Cuban courts, in recent months, have tried several people involved in the business of cellphones and software for Smartphones. Julio, one of those arrested, was caught with a cargo of HTC phones, and GPS for cars, as well as a workshop to create new versions of applications, among them the illegal ETECSA-Droyd. He is now awaiting trial and a good part of what he earned with his computer talent will go to pay an attorney. Digital crimes are no longer just things in foreign film scripts. Hacking, posting a website, testing tools that steal WiFi passwords, have become a source of amusement for some young people with talents in coding and programming languages. The new technologies add to the illegal market, that area of our lives so primitive — almost medieval — but also so sophisticated and innovative.