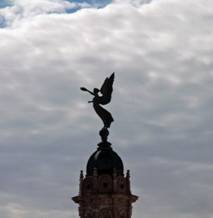 In relation to the ongoing tense situation in Venezuela, the Cuban government and its Government Organisations unceasingly make declarations of support and solidarity with the government and the people of that country, bundling them up together, as if those who are protesting and joining in demonstrations are not a part of that people. It is worth remembering that in the last elections, 5,300,000 voters endorsed the official candidate and 5,000,000 the opposition candidate.

What’s more, our official communication media only show one side of the coin; the Chavista*. The opposition demonstrations, as numerous as the government ones, are hidden. This distorts the reality of a country in crisis, and creates confusion.

It’s an old method which the Cuban authorities don’t stop repeating: in the old Czechoslovakia, they supported the Soviet invaders and the Treaty of Warsaw, in Poland, the Communist coup d’etat, in the old USSR those who opposed Gorbachev, in Iraq against Saddam, in Libya against Gaddafi and now in Syria against Assad and the pro-Soviet government in the Ukraine.

The opposition, without any kind of distinction, are referred to as mercenaries, employees of the Western powers, antisocials, delinquents, etc. It’s a cracked record, which we always hear in Cuba. For many years the Cuban government has only known how to ally itself with similar governments and to support the worst causes: the reactionary and anti-democratic.

Now, with Venezuela, you have to be able to read between the lines and find the censored pictures, in order that what might happen does not catch us by surprise, as happened when the notorious Berlin Wall fell and pulled European socialism down with it.

An old song goes: God creates them and the devil brings them together. Sometimes it isn’t necessary for the devil to unite them: they do it all by themselves.

*Translator’s note: Chavista refers to supporters of the late Hugo Chavez and his party, which remains in power.