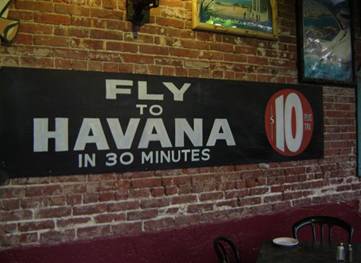 A few days ago the sixth editorial by the New York Times appeared regarding relations between the Cuban and North American governments. I believe that never has a country so small and relatively unimportant merited so much – and such sustained – attention. This smells of strange interests on both shores.

The editorial writer who undoubtedly pulls down an annual salary in the five figures, must feel fulfilled. It is said, although I cannot confirm it, that he was over here seeking official information for his writings. This would not be surprising.

To cast blame on the embargo for all of Cuba’s problems — even for the exodus of our professionals lured by United States government policies — lacks originality. It is merely repeating the same worn arguments made by the Cuban government during almost 56 years in order to sweep under the rug its own errors, economic failures, misguided adventures, blunders, etc., which have resulted in the prolonged political, economic and social crisis that Cuba endures.

It is true that artists, sports figures, doctors and many other professionals seize the slightest opportunity to leave the country in search of better living conditions. The majority of our youth do this, too. But this does not occur only because North American government policies offers them incentives them do do so.

Rather, it is the terrible situation in their country: no housing, miserable salaries — even after raises — and, what’s worse, no real opportunities for bettering their circumstances.  Every human being has but one life to live, and it cannot be squandered believing in outdated lectures about the future — always about the future — when what is truly important is the present. This is a concept that apparently eludes the editorial writer.

What’s more, if we truly look at reality, only a portion of Cuba’s medical missions abroad are provided freely. The majority are paid-for by the governments of countries that benefit — a juicy business for the Cuban authorities, who even describe them as better revenue-generators than sugar harvests because they provide greater sums of foreign currency. Between 60 and 75 per cent of the total salary payments made by these governments for the services of Cuban doctors remain in the hands of the State, which then apportions the remainder as wages — and even that comes not entirely as hard cash, but rather as rights for obtaining housing or consumer goods, at the artificially high prices set by the State. Something similar happens with artists and sports figures working abroad.

In any event, although many of these professionals leave the country, the Cuban authorities never lose. This is because after the emigres settle in other countries, they begin sending monetary remittances to their relatives, who then spend them primarily in government establishments where the prices are set high, the stated objective being to maximize the collection of foreign currency.

The editorials will continue and the official Cuban press will go on reprinting them in their entirety, down to the last comma and period. It would be helpful if those who influence public policy and public opinion, whether from the inside or the outside, would not allow themselves to be misled.

Nobody is against change, and even less so if such change were to lead to the restoration of normal relations between the governments. However, this cannot be achieved on the backs of the Cuban people without their true and complete participation.