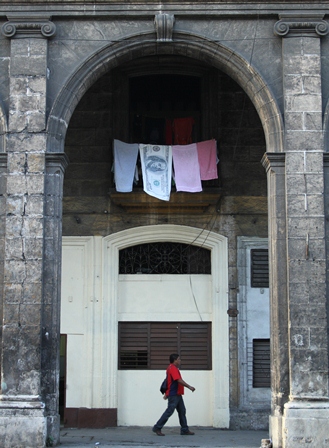 Most of the time I end up agreeing with my dearest friend Agustin. But it always happens that after he’s gone, I find myself thinking about what he said to me and what I said to him. It’s so passionate, and one fears this. Even I, I also fear it. In this case, we have been talking this afternoon about the intentions of Carlos Saladrigas, the Cuban-American businessman who wants to invest in the Cuban economy, even under the regime that seized, expropriated, stole the wealth of his family in the name of the people.

Agustin has been very hurt, has seen a family, in the neighborhood on the outskirts of central Havana where he lives, which has no food to give their children. He always says that the real Cuba is below, within. So he doesn’t trust that this man of business comes to be anything more than another foreign businessman who amasses a fortune with slave labor and so gives the regime the gift of a few more years.

I also heard the words spoken by this gentleman in the Centro Laical, I am also Catholic, knowing my own prejudices I tried to open my mind to the words I heard but a critical piece came to change the shape of the jigsaw puzzle and that was hearing him say to someone who has traveled more than I have: capitalism does not mean democracy.

I warn you that I am not a leftist, because I believe it’s a trap to impose “good” dictatorships. What I understand is that it will not solve the problem of Cubans (which is nothing other than being able to free ourselves from the Castro regime peacefully, without violence), to follow the path of a market economy in Chinese-style Communism, which, incidentally, was held up at the beginning as an example of “taxpaying diasporas.”

All money invested “outside” of freedom, will contribute to more slavery. One can invest in freedom, or one can give time and money to our repressors, cunning, crafty, who for 53 or 54 years, I’ve already lost count, have used terror to subdue all Cubans.

Perhaps the money will make some people forget, for a while, the problem of lack of freedom and the danger to all those who have opposed Castro’s Communism since 1959. But luckily there are some who don’t care about money, because with freedom you can create everything and be happy, but without it everything is cardboard, lies — like the Cuba in the restored Old Havana — while it requires an abominable mutation of human nature to live in prosperity and without threats in the Cuba of today.

I want freedom before wealth, poverty is the least of the punishments for those who don’t love freedom and defend it, freedom of conscience, freedom to be… almost soil, beloved dust, star, earth, light: freedom is the medium where humanity grows. The freedom of each person, touched only by the wisest law, the most impartial, ancestral, human and divine, not political, not military.

Normally those who abhor freedom are those who sell it, so I insist that all those who sit around the Round Table on TV are the only mercenaries. No one can pay us to be free, it’s redundant. You pay someone with what you deprive another of, you compensate, you reward. There is no prize for freedom that is greater than freedom. When freedom is at stake, we must defend it.

But there are families in Cuba reduced to living almost like animals who cannot think of freedom, who cannot be punished for this with more poverty, but the lifting of the embargo would not necessarily solve the problem because it is not the exclusive cause of poverty in Cuban homes. In fact, when it comes to the works of the “Battle of Ideas” the money flows and touches all the Revolutionaries involved, and still today they are financing the Utopias that serve to flood the dictatorship with the capital that is missing from the tables of Cubans. Life must be looked at up close to have neither ideas nor ideologies.

It is true that this family that made an impression on Agustin, and that makes an impression on anyone, continues to experience dire need. And you can keep on blaming the embargo. And you can think, or Saladrigas can think, that you have to heal everyone’s hearts. From the point of view of yoga, or Hesychastic prayer, the famous entrepreneur would be right; but that is not the healing he was talking about.

When I listen to the Catholic Church talk about national reconciliation, I also wonder, who needs to renounce themselves to achieve peace? Is it, perhaps, an invitation to renounce freedom? There is no reconciliation with tyranny.

The immense peace of those who believe in freedom is sufficiently transgressive to excite the violence of a regime that has always feared and hated the citizens. The faith I have in Christ will find a way; I believe and I believe in Him. My shield, my fortress, my refuge.