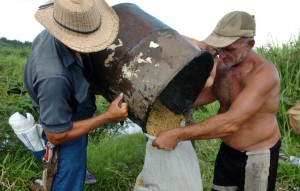 HAVANA, Cuba, October, www.cubanet.org – Of the 6.5 million hectares of agricultural land is in Cuba, only 32 percent was cultivated in February 2008, when General Raul Castro assumed the presidency. There were 2 million acres covered with the invasive marabou weed or other weeds, and badly cared for. In other words, one third of the arable land was idle.

Twenty years after their creation, the Basic Unit Production Cooperatives (UBPCs), with the 1.77 million hectares of land they own, only managed to cultivate 219,100 hectares in 2012. With the exception of land used for growing sugar cane, coffee, cocoa and cattle breeding, these cooperatives reported 23% of their land to be idle, covered with marabou and other weeds. 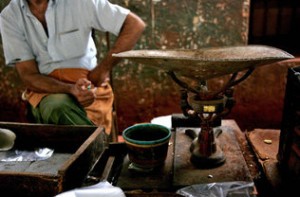 To help turn around this deplorable situation, the government enacted Decree-Law 259, in July 2008, which authorized the distribution of land, in a form of leasing known as usufruct, up to a limit of 13 hectares per person, for a period of 10 years, with possibility of extensions. In the last five years, 1.7 million hectares has been distributed to 174,000 lessees. Of this figure, 53% is destined for livestock, 23% to vegetable crops, 7% to livestock breeding, with small areas under cultivation in tobacco, coffee and sugarcane.

But right now the process of distribution of land in usufruct is hampered and limited by of bureaucratic delays in the approval of applications. This is compounded by the slowness and delay in beginning to work the land, sometimes caused by the lessees’ inexperience of the farm work. Also due to the fact that they face a shortage of the means of labor , their high prices and poor quality.

However, the major obstacles confronting the delivery of lands in usufruct come from the State farms, which hinder and are reluctant to declare vacant the 500,000 hectares of land that remain unproductive.

Of the total land owned by agricultural enterprises, cooperatives, farmers and the lessees, only 1,353,519 hectares were cultivated in 2012.

The poor results in agricultural production require the government to spend 1.5 billion dollars in food imports, most of which could be produced in Cuba.

The situation is such that between January and March of this year there was a drop of 7.8 % in agricultural production, reporting a significant reduction in the production of beans, potatoes, citrus fruits, eggs and milk.