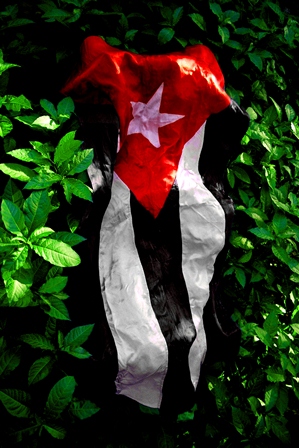 Eugenio was released in the afternoon, after the disastrous Pope took his plane back to Rome. But Augustin was still in a cell, because Eugenio saw him in passing, and also with him a member of “Los Aldeanos.” They have arrested many people. When I returned to my house I met in the elevator one of my very “integrated” neighbors, returning with his white cap and T-shirt and asked him if he had gone to see the Pope:

— No, I was in the Buena Vista cordon, in Playa.

— That’s a long way from the Plaza.

— But on the way to the airport.

— And all this was to protect the Pope?

— To keep anyone from getting close to him.

I insist that this may have been the orders even of the Pope himself, but in the case of Cuba not only for safety but because in this visit the opponents of the regime have been excluded once again. The Pope did not come as a champion to advocate for the rights of human beings not to be treated as a “species” without rights. The Pope came so that the Church would have more space for Public Relations. And while I believe in the Gospels, the Catholic way is not to preach a living Gospel, but merely liturgical ceremony.

The Pope did not met with the Ladies in White because having “little time” he did not consider what affects Cubans most a priority: segregation, political imprisonment. The Ladies in White are the only gladiators who “do not hide their face from the blows and spitting.”

The Pope is an emperor who judges sinners and seems to absolve from their blasphemies only the powerful. The power in Cuba is blasphemous, abhorrent to the human person and the Pope himself said at the Plaza that the measure of man is Christ.

I already knew this, because fortunately I did not learn the Gospel from any priest, any catechist, they could not save me from an adolescence marked by a manipulative and destructive mother like mine. God saved me, reading the Gospels, giving me peace, certainty, full identification.

I went out with my daughter to buy bread, because to all these hunger is also like Jerome’s lion. On the way back a dog followed us. A real dog, a hound, clearly a little less a dog than State Security. My daughter, like most children, is afraid of dogs, and I perhaps inspired by this terrible day, had heard me tell her: Dogs sniff your adrenaline and want to attack you, do not be afraid, one should not feel afraid of anything.

One should be afraid only of God to not offend him, respecting our neighbors and yourself respecting yourself. I don’t want her to forget me. I’ll have no more fear of state security, I fear only God who I can love because he has loved me even unto torture and death. And the Resurrection.