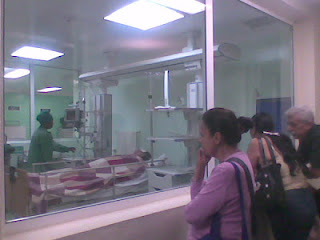 You never know which is worse. The debacle of a hospital in ruins, like most in the city of Havana or perhaps in the whole country, or the no less deadly accuracy of a luxury therapy room, one of the science fiction hangars that come out in First World movies, and suddenly, a Day of Love you stumble upon, but in a corner of Vedado.

Oncology and radiology it says on the facade in a creepy font. In the lobby, a monstrous masterpiece of modernity dedicated to “hope.” It’s obvious that we are entering a terrain where materialism and God share the same isotropical homeland (like radioactive isotopes).

I tried to get in and out with blinders on. Without noticing the details. Without humanizing the faces of those who come toward me in wheelchairs. Without hearing the moans from the next bed. Without understanding the maternal tongue that says right out in the hall the age of this boy (the undermined maxilla) or of that bald teenager (the blood liquified).

I greeted my family as if they had returned from a long exile. I looked through the fogged glass. I swear I didn’t know what city that was, much less what date it was. The night was so beautiful and I didn’t want to think I was still breathing. I came not from abroad, but from among the dead. Dead for now without a diagnosis of cancer, like my country cousin, but still ready to go to pieces in operation after operation. Pieces of memory cut for free. Dizziness. Feeling absolutely nothing. Not recognizing the ancient faces of other cousins younger than I. When you wake up, suddenly I’ll be like a hundred.

They sedated her in a luxurious private room. Full of tubes. Partial glossectomy, I thought I understood, or at least I reconstructed the word thanks to its etymology. My cousin would have to learn to speak again. Would have to, also, cling to that amateur monument of hope. This is not her first surgical intervention. And so much cut-and-paste on the body wears us out.

The medical report was gentle. Each nurse with the demeanor of a professional reggaetoner, so full of vitality and humor. We looked through a window to the intensive care room. Quite swollen by the invasive manipulation she slept with a grimace of pain. Nightmares for sure. Nightmares and no ability nor did she want to wake up.

In half an hour I was free again. A drunk spewed curses on the government over the curb (from what I saw, I knew this detail would not be tellable: too literary, too much allegory of a good final contrast for a chronicle, but there you are). He said he himself had lived in capitalism and so he knew what it was to live. I don’t think so. You could tell he was still young amid the stinking filth in the faded light. Cuban capitalism day by day leaves too much in the past. I don’t believe him. Too much repetition of the words life and living. At best someone will die in there and no one would dare to pass. We’re trapped.

The teams looked so neat. The floor of some synthetic material, gleaming under the neon lights. An air conditioner on full blast. And yes a certain overwhelming sense of loneliness. Dying would be easiest. Outside on 23rd street definitely no one’s missing. They’re all there, including me. Those who are in bed at 8:00 at night have nothing to do here. It’s as if they never existed. As if we had never existed. Nausea.

I remember my studies in Biochemistry in the last century not far from there: at about 25th and K. We read about the thousand and one molecular mechanisms of cancer (I have classmates who got doctorates in the subject). Almost beautiful. An out of control clock. A mischief of evolution, viruses included. But there are a thousand and one developable strategies to make fun of cancer tomorrow. Man has a pretty good idea of what to do about it. We just lack time and money. And the planet will not give us the mercy of such an opportunity. Nor will history, with its crises and perennial revolutions. For now, we cut little pieces of meat. Inject this or that monoclonal antibody or radioactive serum. And derive encouraging statistics, as we impose a priori the mausoleum that welcomes you to this hospital resuscitated from among its ruins, at 29th and F.

I a couple of hours the sun will come out. I’m not afraid. I’m terrified. Without the arm waving panic. With cynical equanimity. I thought I would be a child. I was wrong. I grew up some time ago. I’m more adult than anyone. I have no references to continue forward. Please. Now.