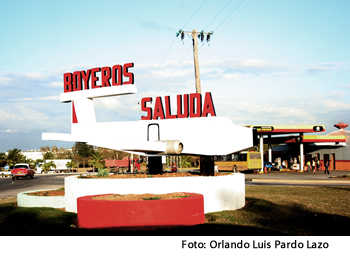 It has barely thirty-two pages, a blue cover and a shield of the Republic engraved on the cover. The Cuban passport seems more like a pass than an ID, with it we can escape the insularity but having one doesn’t guarantee that we can get on a plane.

We live in the only country in the world where, to acquire a travel document you have to pay in a money different from that in which you receive your wages. Its cost — “fifty-five convertible pesos” — means the average worker would have to save their entire salary for three months to acquire one.

What should be a credential obtained by the mere fact of being born in a given nation, here is a privilege for those who possess hard currency, those colored bills that you acquire by doing the exact opposite of what the official discourse tells you to do.

However, at the beginning of the 21st century it is no longer unusual to find a Cuban with passport, though it was extremely rare in the seventies and eighties. At that time, only a select few could show a credential that allowed them to board a plane and travel on it to a foreign airport.

We became an immobile people and the few who managed to leave went on an official mission or via the path of final exit. To cross the barrier of the sea was a prize for those who had scaled the structures of power; the great mass of the “unreliables” could not even dream of leaving the archipelago. Fortunately this started to change with the coming of the nineties.

Perhaps it was the massive arrival of tourists who infected us with curiosity about the outside, or the fall of the socialist camp that left the government no longer able to offer “travel benefits” to the most loyal. The truth is that in those years the mechanism to leave the island began to open. Growing access to convertible currency — either through family remittances from abroad or through self-employment and illegal work — also contributed to our ability to begin to explore other horizons.

Most of the time this was achieved thanks to the solidarity of a friend or relative living in another country, who covered the excessive costs of a trip. If it had depended on our pockets along, very few would have managed to board a flight to anywhere. It’s true that the act of traveling ceased to be a prerogative enjoyed only by the elect, but the government maintained an ideological filter to prevent its critics from accessing such a succulent gift. Even to this day, they maintain fierce restrictions on entering and leaving the national territory.

For those of us inside, the lock is called the “exit permit” and its bestowal takes into account political considerations. Those who have emigrated, must also undergo a similar process, that culminates or not in their being able to enter their own country as tourists. The final decision in both authorizations is made by a military institution that claims the right to give no explanations.

Thus, in offices where the exit permit, called the “white card,” is sought, or in the consulates where our exiles must ask approval to return home, human dramas take place, and arbitrariness is the order of the day.

Those who emit critical opinions, belong to an opposition group, or have dared to exercise independent journalism, rarely obtain a travel permit. Another highly controlled sector is people who work in public health, who need a license from the appropriate minister to be able to leave.

The situation takes on an especially dramatic tone among those emigrants who after living abroad for decades, are not allowed to enter to see their families or their children, now grown. Some die in the distance, without being able to even kiss the forehead of the mother they left behind, or cast a final glance at the house where they were born.

One Party, one ideology, has claimed the power to regular our migratory flow, as if the Island platform were not home, refuge, but rather a prison, redoubt, trench.

For those lucky enough to get a travel permit, then comes the second stage of the ordeal, which consists of arriving at an airport and showing a passport that many regard with suspicion. The high number of Cubans who, each month, stay illegally in some corner of the globe, means we are all on the list of the most doubtful when it comes time to hand out visas. Thus, when they finally are settled and naturalized in another country, my compatriots breathe a sigh of relief at being able to count on another identification document that gives them back the sense of belonging to some place.

A few pages, a leather-wrapped cover, and the shield of another nation can make all the difference. Meanwhile, this blue booklet that says you were born in Cuba is hidden in the back of a drawer, in the hopes that some day it will be a source of pride, not shame.