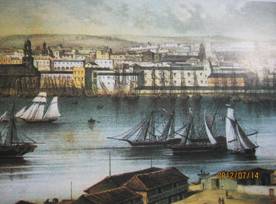 The motorboats that used to cross the bay from Havana to Casablanca and Regla, and vice versa, always reminded me more of streetcars than buses. Perhaps it was their yellow and white colors and the profusion of polished wood in the ceilings, benches and window frames Then there was the water, clean and transparent, in which you could dip your hands and, if it was a hot day, splash your face, infusing it with the smell of saltpetre.

The rhythmic purr of the motor was unique, as were the old automobile tires hung along the sides of the bow and stern which facilitated docking and undocking. On the rear deck the conductor, who collected the tickets but did not drive the boat, guided it in as it approached the pier, attaching it firmly and assuring the safe boarding and off-boarding of passengers on its continuous round trip voyages. 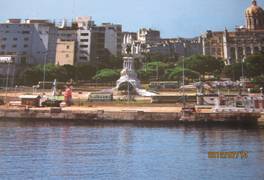 Making the crossing in these boats was one of the real adventures of childhood. The bay seemed immense, its tranquil swell becoming choppy in winter as though the sea had been churned up by Sandokan and his pirates.

Casablanca and Regla were two little towns near the city yet were completely different from it. They were villages of fishing boats and sailors’ customs, marked by the language of the sea. To stroll through them, even in their limited physical confines, was to be in a very different place. It was one of steep and tortuous streets, modest dwellings, and two churches—one inland on high ground and the other next to the sea.

From the shore one could see the city, with its jetties, buildings, docks and ships of different sizes—some docked in port and others making their way up the inner canal—giving it life. The bay, once filled with wooden hulls and later defended by stone fortresses, became a meeting point for ships packed with treasures making their way from the Indies to Spain. It was an important shipyard where magnificent galleons were built. During the era of the Republic it was the country’s principal point of entry for both travellers and merchandise, always bustling with activity.

Later it was lined with ships carrying petroleum and Soviet merchandise, and the vesselsRossía and Gruzia, which transported students. In time it succumbed to the generalized decay affecting the country and even became polluted. In its long history it witnessed two tragic events: the explosion and sinking of the Maine at the end of the 19th century and the sinking of the tugboat March 13th* at the end of another century, this time the 20th.

With development came the portable cranes of the coal mines and the smokestacks of the big ships as well as the figure of Christ, sculpted by Gilda Madera, rising from the heights of LaCabaña, from which he watches over all its joys and sorrows.

Pelicans, seagulls, martins, other marine birds and even fishabandoned the contaminated bay, which gave off a nauseating odor and whose waters turned black and gelatinous. Little by little, though altogether too slowly, it has begun to recover its former appearance.

A few birds come to visit, fish have appeared and the water is starting to become clean and transparent. Now, after a fifty years absence, a small ship, the Ana Cecilia, carries humanitarian aid and shipments from families living in the United States. A combination of tourist, ecological, humanitarian, economic and even political interests seems to have worked a miracle. We await an agreement that will bring a fix. But something is always better than nothing.

*Translator’s note: the 13 de Marzo was a tugboat commandeered by a group of Cubans trying to escape to the United States. The boat was sunk on July 13, 1994 by Cuban authorities, which led to the drowning of 41 of its 72 passengers. 10 of the dead were children.