Daniela killed herself. She burned her brain; this is what I’m referring to.

In the bathroom of the theatre, they said. When the power went out. She broke open an outlet, grabbed the cables, and peeled them back with nail clippers. After, she stabbed her skull with scissors twice, then put the cables through. Into her brain. They say that this doesn’t hurt, and neither does a quick bite to the brain. Then she sat on the toilet, they said. And when they turned the electricity on again, the voltage and the amps came and went as they desired. You should’ve seen it, they said. You could see into her skull through the holes in her head, can you believe it? And her underwear was wet. And all of her makeup was still intact. Daniela wasn’t one of those fairy faggots that cried, they said. But she’s the one that pissed herself, they said.

None of them were there, but they keep talking about it. And I believe them. I thank them, and I walk down the sidewalk in the shade because the red-blue police carnival is already driving me crazy. It’s a beautiful day. A little bit of sun, little clouds, an incredible transparency.

“Hey, they told me that a crazy chick killed herself in there.” Gloria jumps toward me, with her eternal smell of trash. “Were you there? How was it? Hey, what the fuck are you laughing at?”

“It’s a beautiful day,” I said dodging her hand trying to grab my arm.

“That happened because someone wanted it to and he pressed a few buttons in his office.”

It’s true. It’s horrible. It’s like remembering that my stomach is full because a calf was butchered a few days ago. No. It’s worse than that. It’s like being the butcher who dismembered the calf. Gloria insists: “How was it? Was it because she was having an affair? Or did they tell her she had AIDS? Tell me you faggot.”

“It’s not important to you,” I said. “Stick your tongue up your ass.”

She spits on my feet and heads toward the mountain of trash that spills over the buildings’ trash bins. I stare for a few seconds while she begins to sniff, to rummage, to salvage. I’m tired of looking at it. Every day the same corners, the same trash bins. This is Gloria of the neighborhood. She who eats what you shit. She who wears anybody’s clothes. She who collects cigarette butts at the bar. She who enjoys this city as a free supermarket. You know, Jesus, so young…

Broken spandex over her butt. Tan skin with no cellulite. Skinny and harsh body. Spiked and ashy hair. So young. I turn my back and I continue toward Barcelona St. I walk around the Capitol. I continue going down toward Brazil St., until I catch a glimpse of the bay in the distance. I walk, contemplating my shadow which walks ahead of me, until there’s no shadow to think about. At some moment, I don’t know when, the whole sky was cloudy. I tend to be slow at noticing these kinds of things.

“Imagine that, Dani, my dove. Can you imagine? Harley Davidson. You know what a Harley Davidson is? A bike like the one uncle Patricio has. But bigger, like a sofa. And you and I on her, on the road, can you imagine? On a freeway like in the movies, you know, Kansas, Arizona, Omaha, Salt Lake City, sun, big sky, straight, always straight, into the cloudy horizon, into the horizon where lightning always falls, you know, can you imagine, my dove? You see the bolts cut the air, but the motor of the Harley won’t let you hear the thunder, and then you go ahead and it never rains, because the clouds are running from us, and there is almost no weed, and all is quiet, the motor of the Harley, and you laughing, and I accelerating and accelerating, can you imagine?”

Yuri sometimes came. He listened to us for a while and then left. Yuri was a very boring older brother, because he was never hungry. He left the university to sell marijuana and PC components. Yuri was the one who pushed mom to send me to the weekday boarding school. “We’re very cramped here,” he said. “My clients come here, they see all of these people, and then they get nervous.”

After, somehow Yuri found a husband for mom so she could leave too. “And don’t you worry about me taking care of Dani. She’ll be better fed and attended to with me than she was with you two.”

Mom left under pressure. I can’t blame her. I left feeling pressured. Daniela never forgave me. Seven years. Daniela was seven years old when I broke her heart, and she never sent it for repair. She started liking the bubbling of her broken teapot. Dandling it through the nights, she put a different rhythm in her life.

When I came to visit, I laid beside her, just like before, and I talked to her about the festivals at the Dunlop curve, during Mardi Gras, and in San Francisco. “Quit talking shit,” she said to me, and turned to the other side. Yuri sometimes came, and he looked at us like we were pathetic.

Yuri is sitting at his desk, alone. The Sergeant is standing up, leaning on the wall, smoking. But he doesn’t count. Yuri builds a domino wall. He knocks it down with his finger:

I sit in front of him, gather some dominos, and make them look like Stonehenge. These type of things always intrigued Daniela. Dolmens, menhirs, whatever. Neolithic drunkenness, all of that shit.

“We have to move on. You heard me, Omaha. You have to get rid of the burden,” he says, as he raises his head. “What do you got there?”

A man enters the room pushing a child ahead of him:

“You can stay with him tonight, but tomorrow I’ll be here early to pick him up. Give me the usual.”

“And what’s the rush?” Yuri measures the boy with his eyes, and the boy smiles at him.

“He’s my sister’s nephew. So that’s the hurry. The usual, I told you.”

The man leaves. Yuri gets up and tells the child:

I follow them. In the back room, Yuri sits the boy on the bed, and puts a ham and cheese and TuKola soda in front of him, on a small table. For a while, Yuri watches how he eats and drinks, and then he gives him a Nintendo DS. 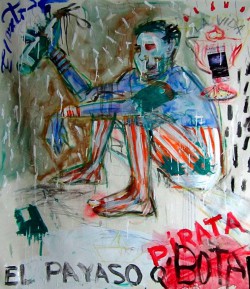 “I hate it when they bring them to me like this,” he comments. “They don’t even last for a night.”

I shrug my shoulders and return to the living room. The Sergeant is in front of the table, roughly groping a domino. He blinks like a boy in trouble, drops the domino, and returns his three hundred pounds of muscle and fat to his spot.

I put any DVD into the player and throw myself on the couch. It turns out to be Wesley Snipes, with glasses and a sword. Just what I need. It begins to rain outside.

TO READ THE REST OF THIS STORY AT SAMPSONIA WAY MAGAZINE, CLICK HERE.