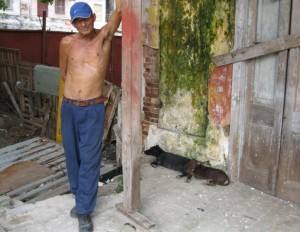 HAVANA, Cuba, November 2013, www.cubanet.org.- Giraldo Rodríguez Comendador, 76, can’t cross the avenue because cataracts cloud his vision. Every day he has to decide whether to seek the evidence of this 42 working years (to initiate a process that would culminate in a 250 peso pension — Cuban pesos, not the ones convertible into dollars, about $10), or to set himself to the little “errands” — as he calls them — to survive.

Most of the time he’s forced to the second option, not just because hunger is an undeniable fact, but also because he is losing hope.

In 2006, when he retired — from the Ministry of Construction in Las Tunas where he worked as a driver — they told him that his record didn’t appear, that it might even have been devoured by flames. I’ve heard, on other occasions, of people with a problem like his, but until today I didn’t understand that a lost work record multiplied by zero equals the sacrifice of an entire life.

To alleviate his desperation a little, a social worker appeared and offered him the assistance of 142 Cuban pesos, but Rodríguez Comendador expressed his indignation.

“Like me there are a few, at least in Las Tunas, who have demanded and taken the charity given to them. And they are satisfied with that. I am not a beggar. To me they must give what is mine.”

To get “his” he has to go to every place where he worked and get them to sign documents that support his having been on the payroll, and then go to the Collective Law Firm and hire a lawyer to make his claim. One of the inconveniences he confronts is that most of his peers have retired. Others have changed jobs. He says that once he met the boss he had when he was working on the El Cornito dam.

“He said to me, ’Boy, go to Los Pinos, to the human resources department of Removal and Construction, and I’ll send you a truckload of witnesses.” 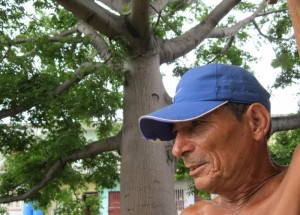 But the witnesses weren’t enough to authorize paying the pension, which is processed through documents like the work record. They will only certify, in an extreme case like his, that he worked in a specific place for a determined amount of time.

“Seven years ago I was on the ropes. Even my knees gave out when I was walking. I was convinced I’d lost my working years. For nothing, because they mistreated me like they are mistreating me today. I worked to have what’s mine, for myself I don’t worry that there’s a law that obliges children to take care of their parents,” he says.

As for hiring a lawyer, the fee for labor processes isn’t very high. But Rodríguez Comendador asks:

“How amI going to hire a lawyer? I don’t know the medical prescriptions I’ve lost out on because I can’t buy medicines that cost 19 pesos.”

He went out again to look for work, but no one gave him any; because he’s of retirement age he doesn’t have valid documents and can’t do temporary work.

Also, as blind as I am, they put me on the truck to throw dirt, mud, cow manure, and I do it because I need the pesos. He knows that I’m blind, so what he’s going to do is take off. My situation is absolutely terrible situation.”

When asked if he’d been hungry, he remains silent for several seconds. And then answers, like someone who rising above his honor made a stack of old crumpled papers:

So there is no doubt when he says,

“Me, you tell me to take an iron bar to the train station for 10 pesos and I hoist it on my shoulder and I take it.”

But the urgent question is, how long can he continue to take his body to the extreme of exhaustion with such bad nourishment?

This doesn’t seem to worry him more than how he is going to get by day-to-day.

“I’ve caught myself at six in the morning, thinking. And what can a man think when he’s at a crossroads like I am?”

The little light fades and he says,

“I’ve thought about hanging myself, girl. Five hundred times I’ve looked at an iron bar back there where I can hang myself, but I see this fat woman you see sitting over there, that’s my wife, and I change my mind. Anyway, I have to die of something.”