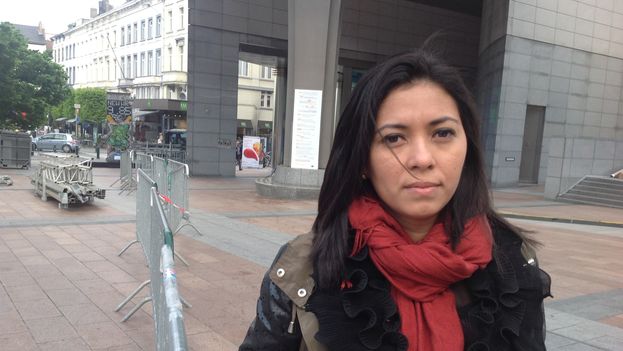 14ymedio, Reinaldo Escobar, Brussels, 9 May 2015 — Wendy Flores Acevedo, a young lawyer with the Nicaraguan Human Rights Center (CENIDH), spoke with 14ymedio in Brussels about the loss of legal guarantees in recent years in her country, under the government of Daniel Ortega.

Escobar. What is the situation today with human rights in Nicaragua?

Flores. Human rights in Nicaragua have deteriorated considerably since 2008, one year after Daniel Ortega was reelected, because they have lost the value they had. They are not given due respect by the officials and above all non-governmental organizations who devote themselves to this work have been excluded, accused of being mercenaries in the service of imperialism. On top of that, we lack access to information.

The CENIDH made at least two annual visits to the eight prisons in the country, and in addition when we receive complaints about serious violations, we were able to visit the complainant, and physically see the individual in an interview. Since 2008, this is no longer possible. We aren’t even allowed to enter the prisons.

Escobar. Has the government withdrawn your legitimacy?

Flores. We still have legitimacy, in the sense that citizens continue to trust us, they continue to send us complaints, and that is what legitimizes us as an organization in defense of human rights. Despite the difficulties, we investigate cases. Often, the lack of information, refusal of access, is a confirmation of the alleged facts.

Flores. We don’t have it now but we did have it. For example, a military doctor who was sentenced last December just for commenting that it seems like we were in the 80s again, in a “Red Christmas,” because it was stained with the blood of the peasants. He made statement was made on the sidewalk outside his home when he was on vacation. This lieutenant was accused of the crime of “against military decorum.” His comment was heard by one person, who denounced him. Thanks to the pressure they gave him a sentence of only three months, but it still was a political case, because it violated his right to freedom of expression.

Escobar. And what was this military man referring to when he spoke of the blood of the peasants?

Flores. He was referring to the repression suffered by several peasants at the hands of the national police for protesting against the canal they are planning to build in Nicaragua. Those demonstrations lasted one week and on 24 December ended with violence by the authorities.

Escobar. And what is the conflict with the canal?

Flores. The main problem is perhaps the lack of information people have about the consequences of having a canal. Informing them has not been possible because, among other reasons, there are no studies of the economic feasibility or the environmental impact. At a recent hearing before the Inter-American Commission on Human Rights, the State affirmed they were terminating these studies, but the problem is the law has already been approved and a concession agreement is already signed through which a Chinese concession acquires the rights to 107 square miles of the nation’s land. In this agreement it specifies that neither the Constitution nor the laws of the country will apply to this area in the case of future conflicts.

Escobar. What about the majority of Nicaraguans, are they happy or unhappy with this project?

Flores. There is a lot of discontent. Indigenous peoples have not been consulted and it is an obligation of the State to do so. Farmers have not been consulted, nor have they been given any information about the process of land expropriation, or if there will be compensation. This is ancestral land with and this has generated all kinds of protests.

Escobar. Is a referendum or something similar not provided for as a part of the public consultation?

Flores. Many have raised this issue, but the government does not mention this possibility. There have been deputies who have questioned the project and have supported the peasantry. Private business is silent, because it is assumed that there will be many economic interests at stake. The same goes for politicians who are businesspeople.

Escobar. Do you suspect that there is some corruption behind this plan?

Flores. It is assumed that behind the canal there could be money laundering or corruption, and this assumption rests on the lack of transparency about the financial resources to be employed. In fact, the Chinese company that has the concession does not have the money to carry out this project, which is immense.

What there is now doesn’t fit into any definition of philosophy or of what we once knew as “Sandanistism,” as an orientation of the political Left.

Escobar. So ultimately does all this seem a little “too good to be true”?

Flores. That’s part of the hypothesis: that the canal scheme is a strategy to carry out the expropriations and ultimately what they will end up creating will be tourist centers. But it could be a canal, or something else, the fact is that by law they have established the occupation of a strip of territory that will divide Nicaragua into a North and South and that has been approved due to the lack of independence on the part of the judicial system. We are not seeing the canal, nor the resources, nor the viability, nor the increase in demand for labor. The only thing we are facing is the imminent threat of expropriations.

Escobar. But a work of this magnitude would necessarily create a high demand for labor.

Flores. They say about 50,000 Chinese will come to the country, considering that they have done similar projects in other countries.

Escobar. How is it in Nicaragua today with regards to women’s rights?

Flores. We have suffered a legal setback since political parties decided to pass a law that completely criminalizes abortion, including therapeutic abortion or abortions for pregnancies that occur as the result of rape. We had an article in the law establishing the exception to guarantee the health of the woman. That article was repealed in November 2006. In 2008, with the new government of Daniel Ortega, a new penal code which repealed all criminal regulations were formulated, but in this new code did not set any exceptions to the ban on abortion, and even established language on “injuries due to giving birth” which eliminate every consideration regarding the risk of childbirth. The United Nations has made ​​recommendations for allowing termination of pregnancy in case of congenital malformations or in the case of rape, but to date the Supreme Court has not made ​​a judgment on the appeals filed.

Escobar. Are what we are seeing in Nicaragua is still “Sandinistism” or is it something else now?

Flores. What there is now doesn’t fit into any definition of philosophy or of what we once knew as “Sandanistism,” as an orientation of the political Left. Today all this is contradicted by the practices of the government, with the living conditions enjoyed by the senior political leaders, who bow are businessmen with great economic resources whose priorities have nothing at all to do with situation of human rights and protecting the disadvantaged.

Escobar. And will they continue in power?

Flores. Yes, probably for a long time. They have full control of the economy, the army, the media and parliament.