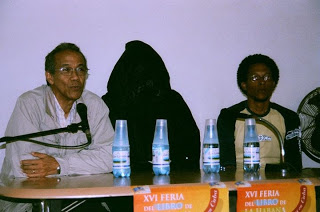 To enter the Metropolitan Museum in New York and be disappointed before the ruins and statues. Rags, stones that were columns, oxidized jewelry, masks of invaluable value.

To spit in a corner, in the corner most accessible to the security cameras. To be filmed. To be seen, detectable. What more can a newcomer ask for, if not the power to call attention to exactly one in the midst of a multitude passing by, grazing.

To expect, then, that the gendarmes of decency come for you. For me. To desire arrest, to provoke it. To prepare a speech of defense, which functions as performance in the headlines this same afternoon. To be read, commented on. Raw material for forums, fire of anathema for the prudish preachers who shape the concept of this nation. To become a cult author in the very heart of democracy. To be someone. To be. To become at least a carnival attraction, a circus creature. To discover that overnight we are a viral reference, virtual. America is the place where even fiction is truth.

To hawk. To spit with bad intentions. Not only on the immaculate tiles, but also on the wall. The next step would be to throw up on some pedestrian. But it is by choice. Nothing ever happens here. Like there, on the Island. Like everywhere.

The security cameras have also been abandoned at this brunch time. We live in a welfare state, half a century after the Welfare State. My poor spit. The saliva freezes, twists in the frost, appears out of the blue. It is Cuban saliva and still not adapted to the snow flurries of the USA.

In fact, it has been a long winter, very long. Almost half of the 2013. April is not enough for spring, we should expect the fall. The Weather Underground. Everything looks to be slightly out of time and yet, nothing provokes anything in this country. Nobody is the intimate and intimidating name of freedom Made in New York. Freedom, a despotic goddess imported from China, like each one of the objects that happen here. That happen to me here.

I think about the museum-worthy bodies of Tiananmen Square. Thousands of students on vacation for centuries and centuries, amen. Eternity begins in 1989, probably in summer. No one is guilty. The capital is unpunished, lewd, unpredictable. The comrades are involuntary executioners. Moreover, they themselves sought it, with their anti-tank flowers in exchange for a few Nobel Peace Laureates. Funeral flowers, like the gladioli that Sunday after Sunday some Ladies in White brandish to the sky of my country.

Today could be it, I don’t know. Sunday. Day of the Lord of History and the Son of Humanity. Please. Luckily, I no longer have any country. I am a ghostly lady-in-white, in white. No need even to be Orlando Luis.

You go to the Metropolitan Museum in New York and you’re disappointed before the ruins and statues. Rags, stones that were columns, oxidized jewelry, masks of invaluable value. Mummified residue. Debris, reiteration.

You look at each object as if History were still possible. As if Humanity were possible. As if the culture itself was nothing but the countless bodies of a children’s book called The History of Mankind.

To breathe. To walk through looking at rooms and spaces. Anachronistic lights. Alarms as futuristic as they are ineffective. Drains from before the founding of New York, in exchange not for a mirror but for an image (in all cases, delusions). Screens with movable maps and arrows and a wiki-chaos if audiovisual signals. Pixels without a country. Impossibly making themselves invisible in the Age of Google Maps. Impossible to be seen in the capital of the thousand and one Apps every 24 hours 7 days a week.

In the body not even a hint of the heating system. The body is pure numbness. Like the memory, like the silence. The Spring is almost over and still the cold penetrates. But everywhere those same dwarves in casual wear keep coming, smiling from their eight or nine years as if they really have their whole lives ahead of them They do not know, they do not come from where I come from. It is better not to know, not to go where I come from.

I look at them. Not with malice but with evil, which is the best way to impose on them the misery that is all mercy. They wear unnecessary little glasses. Chew aromatic gums, display tattoos from the recycle bin, drink a fuchsia liquid from a thermos capable of resisting nuclear winter. Take pills to pay even less attention to their surroundings and, yet, meticulously point out every detail. They type on their iPhones or iPads. They look like aliens who should rebuild our civilization on another planet or resign themselves to humiliatingly failing their homework.

Their jaws fall into aesthetic ecstasy or intellectual idiocy. The Ritalin Revolution, mouth breathing. They never stop moving between the paintings. When they suddenly crouch in some corner, then they carefully read — and will do so until the end of the universe — the most recent luxury edition of The Story of Mankind. Van Loon’s lunatics.

Hardcover and art paper. Flaps. These volumes should weigh more than a ton in their hands. Better not to think about the price. I observe them turning the pages, hyperkinetic, with the arrogance of someone who practices a perfect school diction. Ballet of barbarism. Surely born bilingual, trilingual, multilingual. They highlight sentences with aqua-colored markers, mnemonic devices to win the scholarship now that will open the doors to a PhD in copy-and-paste. From the cradle to the academy to the condominium.

To read at this age is, of course, to read aloud, to struggle between spelling and the obligatory orthodontia of dental insurance. They read like little magnets praying to a material god. The skin hyper-sanitized with synthetic alcohol, glory of the carcinogenic chemicals of this nation. The Age of Horror: who’s afraid of José Martí? They are not children, they are the hope of the world. Mankind is waiting to make History of them.

The smell of something aseptic emanates from each paragraph. From each image printed with organic, or maybe transgenic, ink, impossible to tell. Everything is impossible when they are hungry and the clocks just struck thirteen, although in all of the blessed Metropolitan Museum nobody would recognize William Smith in anyone.

In the United Stated the excess of public libraries guarantees the right to not have to read. Also, we Cubans, nobody calls us anything. We even passed the year 1984. We are anachronistic. To Cubans, at most, American children ask us if we are from Miami or from Fidel. As if the difference were possible. The exiles are easy targets for these American children who ask a politically improper question because there is no polite response. Pinga.

New York, New York: Why have you forsaken us?

My throat is dry. No more rudeness or phlegm. The April light is friendly. In Havana a few days ago a criminal sun beat down on me. An ahistorical light, unsupportive, transparent to the point of murder right on the Lord’s Sunday. Our daily and delirious Habanada. Fidelity, fascism, frames that soon become part of the most lying touristic museum tour of the fifty states of the Union.