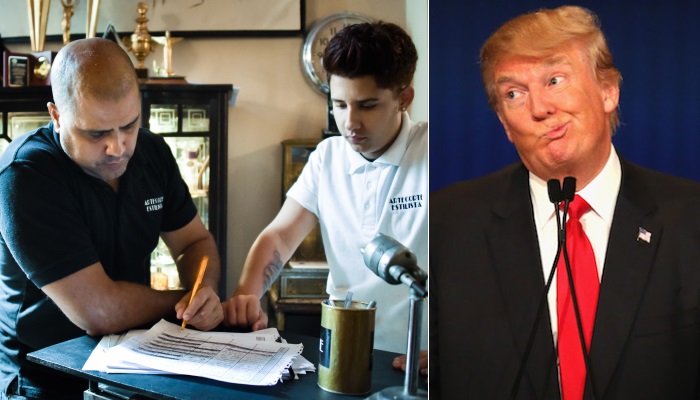 Cubanet, Miriam Celaya, 12 December 2016 — In a curious coincidence with the fifth meeting, held last week in Havana, of the Bilateral Commission in charge of the dialogue process between the United States and Cuba, about one hundred Cuban “entrepreneurs” have just addressed a letter to Donald Trump, the newly elected President of that country to the north, whose term will begin on January 20, 2017, asking the controversial magnate for continuity of the policy of rapprochement and dialogue with Cuba, initiated two years ago by the outgoing president, Barack Obama, as well as the lifting of the Embargo.

The note, promoted by the company Cuba Educational Travel and the group Engage Cuba, is not relevant in itself. A group of Cuban small business owners – united under the officially vilified term of “entrepreneurs” – is appealing to the solidarity and understanding of a great “successful entrepreneur” so that, in his new role of maximum political leader of his country, he might favor the “economic commitment among nations” for the mutual benefit of both sides, a disguised political plea, nothing short of a sly complicit wink among “colleagues.”

Of course, it is praiseworthy that such an incipient and fragile sector has taken the (spontaneous and autonomous?) initiative to come out in favor of the advances of the slimmest of conquered spaces. In fact, in their letter, the Cuban entrepreneurs equally enthusiastically defend the rights of US businessmen to trade with and invest in Cuba as if the Americans, and not the Cubans, were the ones lacking in democratic institutions and laws. Clearly, this is a short letter, but one that makes us want to read it over numerous times.

The concerns of the Cuban embryonic private sector is understandable, taking into account Trump’s well-known statements about his intentions to reverse the process of “rapprochement” if the Cuban side does not show strides in political and religious freedoms, something that would directly affect the influx of American tourists that has been taking place since the re-establishment of relations between both governments, which has clearly favored private lodging, restaurant and transportation businesses.

However, the aforesaid letter is vague on essential matters, and it stands out for its baffling omissions, details that deserve particular attention. The first blunder is its origin, and lies in the improper selection of the recipient on the part of the Cuban proto-entrepreneurs: no less than a president of a foreign country that even today, despite the current policy of détente, is still demonized by the Castro regime’s monopoly of the press as the cause of all the past and future national evils.

This simple fact not only calls into question the much-vaunted national sovereignty – by placing the solution of matters that are the responsibility of the internal economic policy in the hands of a foreign and intrinsically hostile government – but suppresses the Cuban regime’s responsibility for the constraints (if not the smothering) imposed on the private sector, be it the high tax burden, the absence of a supply wholesale market, the punishment for the “accumulation of wealth” or the numerous absurd and unjustified bans that prevent greater prosperity and the development of private businesses.

Likewise, measures which favored the private sector significantly, dictated by President Barack Obama, were hindered by the Cuban government itself from being effective.

None of the official restrictions that the “businessmen” ask to quell in Cuba relate to the embargo, nor do they depend absolutely on the political will of the American government.

In addition to this, the signers of the letter belong to a social sector which tends to express an open rejection of political issues and, on the other hand, voluntarily joined the only union in the world that embodies the interests of the most powerful employer represented by the Government-State-Party, described by them in this letter as the promoter of the reform that allowed the existence of private businesses. To whom, then, could they legitimately make demands other than to this despicable monster, who is both benefactor and exploiting boss?

Therefore, the recipient of the entrepreneurs’ letter should have been the General-President, Raúl Castro, and not the President elected by Americans last November.

Another noteworthy detail is the select club of signers to the letter, mostly entrepreneurs who classify as “successful” within Cuban standards. The problem is not one of phobia against economic success, but quite the contrary. There is nothing we need more in this ruined hacienda than a flood of successful entrepreneurs and autonomous sectors willing to defend their own interests

But it doesn’t seem very honest to claim particular measures on behalf of the entire Cuban people and – even more unseemly – on behalf of the American people, especially when the shocking absence of the more modest signers is evident, who are, paradoxically the most numerous in that economic sector, whom the letter writers estimate at half a million individuals. Weren’t there humble cart vendors, bicycle-taxi operators, DVD vendors, scissors grinders or even retired master dishwashers ready to subscribe to such a remarkable epistle? Were they even informed?

Obviously, the acute social differences of today’s Cuba continue to set the tone, denying the old egalitarian speech that continues to be repeated from the power base. So it happens that, among the private businesses of the idyllic socialist society, there are some that are more equal than others. And, as is often the case, the least equal speak on behalf of the whole.

In the end, in a quasi-foolish brushstroke, the signers make an evident effort to be politically correct in the eyes of the Castro regime, thus remaining halfway between the legitimate defense of their own interests and the ideological commitment demanded by the olive green power authority in return for the corseted ease they enjoy.

Too many doubts in this epistolary chapter suggest the existence of certain powerful hidden hands that, of course, did not sign the letter, including promoters abroad. When it comes to Cuban issues it’s well known that conspiracies are never lacking. But let’s not be suspicious, after all, if our most successful entrepreneurs choose Trump to communicate with, it must be because they think that matters are better handled by entrepreneurs.