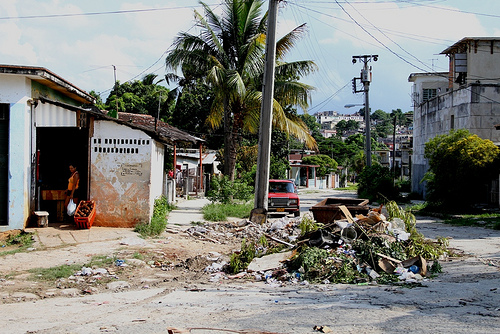 A couple of months ago some strangers in plainclothes waited for me crouched on a corner in Lawton, eventually kidnapping me in a National Revolutionary Police (PNR) squad car when I left my house at the corner of Beales and Fonts streets.

Those in plainclothes said they were from State Security (the PNR were illiterate accomplices from the neighborhood station). Clearly they were, because one of them was Yoani Sanchez’s attacker on 6 November 2009, a paramilitary misogynist. He was the same white guy who reappeared in March of this year — when I was on a hunger and thirst strike for two days after my arrest (without charges or records kept) during the visit of Pope Benedict XVI — to coerce me to go to a hospital where they exhaustively examined me to certify they hadn’t tortured me.

Naturally, what’s important is none of this. If I live in Cuba I’m already buried (of course, I don’t authorize putting my name on any literary contest or independent library), although they haven’t threatened me with death, as they promised Oswaldo Paya in the presence of his family. What is important is a question of angulation, of gaze.

What did they do throughout the holy Sabbath, those guys on their two Suzukis and one Geely car imported by the State? They tossed out rumors for a start (which is crime): the most archetypal was waiting for a provocation in Lawton from the Ladies in White. They probably smoked. Cold-bloodedly occupied the terrified neighborhood. Maybe bought a little lunch from some self-employed person. And sat in the shade of the last almond tree that the anti-cyclone brigade of tree assassins hadn’t cut down.

But it’s obvious they never looked. Their eyelids were blinded by hatred. Hatred against me, against their mission, perhaps against themselves. No one should have any illusions. A paid hatred that one day will force them to kill or be killed, even in front of professional cameras and reporters from the BBC and other chains in chains, which, after all, will broadcast nothing.

If only they had raised their eyes, they would have seen what you see now. The old El Chino Octavio bodega at the corner of Fonts and Rafael de Cardenas. The debacle of a lunar pavement, the shelves as squalid as the facades and the skin of the un-inhabitants, the curbs razed by the bulldozers of Communal Services, the atoll of garbage uncollected for weeks, the bacteria and viruses freely incubating, the sub-Marxist shit that seeps from the pores of Raul Castro’s Realpolitik. Despotic poetry of the first degree.

If only they had dared to believe their own eyes, they would not have gone without the notion of Fidelista favelas — slums — in which the once elegant suburbs of Havana survive. Lawton, for example, with its staircases, rivers, trams and industries, was a labyrinthine jewel on the outskirts of our capital. Today it is just this: the poorest pasture for secret police and regular police who make a living at the expense of not looking.

In reality, I sincerely sympathize with this ostrich-like vocation of the agents of Cuban repression. Their blindness doesn’t allow them to hypocritically polish the image of my country. We are not longer in the mythical 20th century of the international Left. Silenced by the death of the grandiloquent demagoguery of Fidel Castro, our stunted State capitalism will finally show to the world the Cuban people just as we are: the worst of pre-capitalism and the worst of the post-totalitarian State.

Just as well, comrades. It was already time to live in the truth.