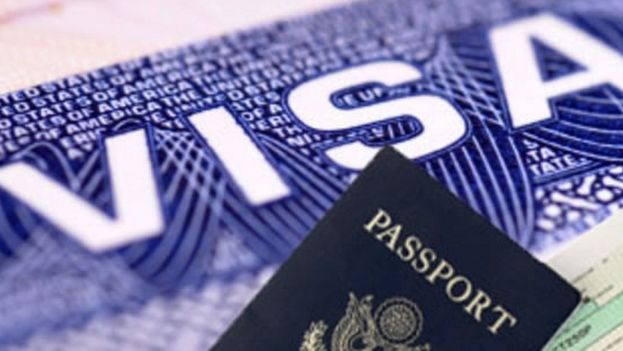 14ymedio, 10 July 2018 — The United States reduced the delivery of tourist visas to Cubans by 30% after the mysterious acoustic incidents in Havana that led to the evacuation of most US personnel from the Cuban capital.

According to figures from the State Department obtained by Martí Noticias, during the current fiscal year 2018 (which includes from October 2017 to May 2018), only 2,414 tourist visas have been issued for “family visits, cultural exchanges and business trips.” Of that number, 83% were issued in US consulates outside of Cuba.

Nonimmigrant (tourism) visas are known by their abbreviations B-1 and B-2. The B-1 visas are issued primarily for business trips, while the B-2 are for those who want engage in tourism, family visits or receive medical treatment in the United States. In 2013, the US extended the duration of the B-2 visa issued in Cuba, allowing it to be extended for a period of five years and allowing multiple entries.

Of the number of visas issued since October, 158 are for B-1 visas and 1,178 are B-2. In addition, 1,078 documents are for the dual categories of B-1 and B-2. The website points out that the most significant cut is concentrated in the case of visas for cultural exchange, which fell by 28% with respect to the total of B-1 visas and double-category visas.

Martí Noticias points out that since 1997 there has not been a decrease of such magnitude in the number of visas granted to Cubans. In that year, 5,829 tourist visas were issued.

The United States blamed Cuba for failing to protect the health of 26 members of its diplomatic corps on the island who presented symptoms such as migraines and nausea, hearing loss and imbalance. Canadian officials have also reported similar clinical pictures without it being possible to identify the causes of what the State Department initially called “acoustic attacks.”

The Cuban government strongly denies that it has anything to do with the injuries to foreign officials and has allowed US research agencies to enter the island. Cuba says that the alleged attacks are part of a strategy of the current administration of Donald Trump to derail the normalization of relations between both countries initiated under Barack Obama in 2014.

The United States and Cuba signed migratory agreements in the mid-1990s to eliminate the mass exodus of rafters to the coast of Florida. Following the signing of the agreements, Washington undertook to issue 20,000 visas a year in Havana to promote “orderly and regular” emigration, in addition to returning to Cuba rafters who were detained at sea.