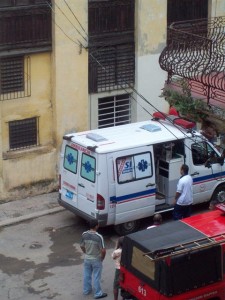 HAVANA, Cuba, July 2013, www.cubanet.org.- When a Cuban family is afflicted by disease there are many who depend on the favor of some neighbor with a car to take them to the hospital. Moreover, the paramedics and nurses of the Comprehensive Emergency Medical System (SIUM) depend on the “thanks” for their patients to “resolve” a chance to eat a better lunch or a to get a few pesos above their salary.

Juan López (he has asked me use a pseudonym), in order to take his father to the hospital, called SIUM and waited three and a half hours for the ambulance to come. The Center Coordinator told him onthe phone: “Your case is the first on the list be we can’t resolve it.”

“After that long wait I was at my limit. I went to look for a neighbor with car, some way to get him there,” said Lopez. “Time passed and the disease was evolving.”

Once a medical emergency is reported the time stipulated to a rescue is 10 minutes. A young SIUM worker asked not to be named to provide testimony. We will call him Nurse X.

He has a license in nursing and counts on their being a key system, in communication with the Provincial Coordinating Center at 44th and 17th, in Playa. Key 1 means there’s an emergency call. Key 2 indicates they’re on their way and should be there in 10 minutes. From 2 to 3 is working with the patient. And 4 is on the way to the hospital. Key 5 means that the case has been admitted and they’re ready to take on another.

“In reality, we spend up to 12 hours to pick up a patient, but there are seven bases all over Havana and on occasions there are seven or eight cars (ambulances), no more. Other times there are 11 or 12 for the whole province. For example, the based in Plaza also covers the demand for Cerro, Centro Habana and Habana Vieja. There are days, like today, when we are working with just one ambulance.”

The delay experienced by the population is the result of a long list that prioritizes the most severe cases. But from the position of Nurse X the work is continuous.

“Often, we leave at eight in the morning and it’s three in the afternoon and we haven’t eaten lunch. People offer us a soda, some snack, even money. Others have nothing to offer. Some are upset by the delay and protests. Sometimes we’re notified of a case of hip fracture, but after 10 minutes we get a case of loss of consciousnesses and the fracture has to wait. If then a heart attack comes up, the fracture falls further behind.”
Few Cubans have car; you can’t even say that one member of each family has one. The salary of a worker is so tiny that it’s not even enough to take a taxi to the hospital even when it’s a medical emergency.

There are three categories of ambulances, intensive, intermediate and basic. But Nurse X tells us that “it is possible that an basic care ambulance arrives for a critically ill patient and all you can do is verify it and call back to the Coordinating Center. Then they send a second ambulance has that has electrical equipment and a defibrillator, but that isn’t equipped with artificial ventilator and the patient needs to be intubated.”

The look of incredulity on my face leads to, “It happens.” 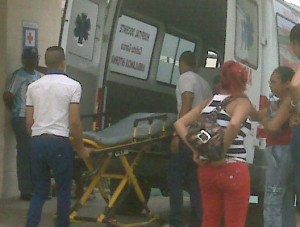 Nurse X works in an intensive care ambulance, supposedly designed to assist the most severe cases of the city. But because of the deficit of cars, he has even had to take care of transferring patients between hospitals. “I have come to work with 14 or 15 cases in a day, not only life support, but whatever shows up.”

Many buildings of Havana, especially in the downtown area, are several stories, with very narrow stairs. After an exhausting effort, no time to rest, nor is there a coffee before the next call. The SIUM staff work 24 hours. They complain about working conditions and the lunch menu: “Many times you can find yourself with a tray of flour with boiled or scrambled egg, soup with rice. ’International Nurse’s Day’ seems like a lot of hogwash.”

Someone with a degree in nursing, with SIUM, working 24 hours on and 48 off, earns between 740 and 750 Cuban pesos a month, the equivalent of about $30. “There are like 12 or 13 shifts a month. You have to put your feeton the ground, you have to eat and I have a daughter. That’s not nearly enough.”

Like many of his colleagues, Nurse X aspires to leave on a medical mission (outside the country) to improve his economic situation, but to do that he should first leave the ambulances and work as a nurse in some hospital.

“The SIUM is my life, but there comes a Training Course and they won’t release you for lack of personnel. So you stay and unfortunately if Public Health personnel don’t go on a foreign mission they’re nobody.”

At the SIUM National Base, based in Arbol Seco Street, Central Havana, things are different. From the outside you see a parking lot with several modern ambulances. The first impulse of the reporter is to ask the medical staff chatting at the door  how many cars the National Service has and what kind of cases they serve. A doctor’s response is blunt: “You have to go with a paper to the institution to which you belong, at the direction of the center, to get answers to those questions.” 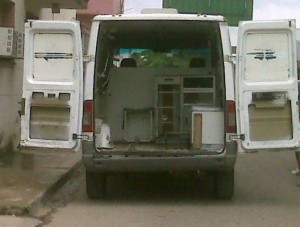 We do know that people complain of the delay and the quality of service. ’’The population is poorly educated. This is not a taxi service,” he replies.

I insist, invoking the public interest in the matter. The doctor’s answer is a lie flung in my face with cynicism: “There is no conflict between the interests of citizens and the interests of the State.”

The national SIUM is responsible for performing institutional transfers between provinces, but mainly for covering international events or other events, as on May Day at the Anti-Imperialist Bandstand. They are sent to the airport, to the Palace of Conventions. To the Parliament and any activity that has to do directly with the government. It was employees of the Cuban Red Cross who, during the previous visit to Cuba of Pope Benedict XVI, took the stretchers on hand for the public that might “suddenly fall ill,” and as observed worldwide, used a stretcher to assault a peaceful opponent.

Provincial SIUM workers see the nationals as “people working with very few tools and delivering very good service.” But also “ideologically filtered.” A paramedic from the provincial service who has also requested anonymity explained that “even the driver of the national delegation has passed courses in political training. They are internal officials working for State Security.”

The national SIUM ambulances themselves are equipped with everything you need to face any emergency. He himself asked to be part of that service because ” these people eat well” and don’t have the problems of the provincial SIUM. “When people see these ambulances they believe they’re looking at SIUM, but they’re not. In those cars all equipment works.”