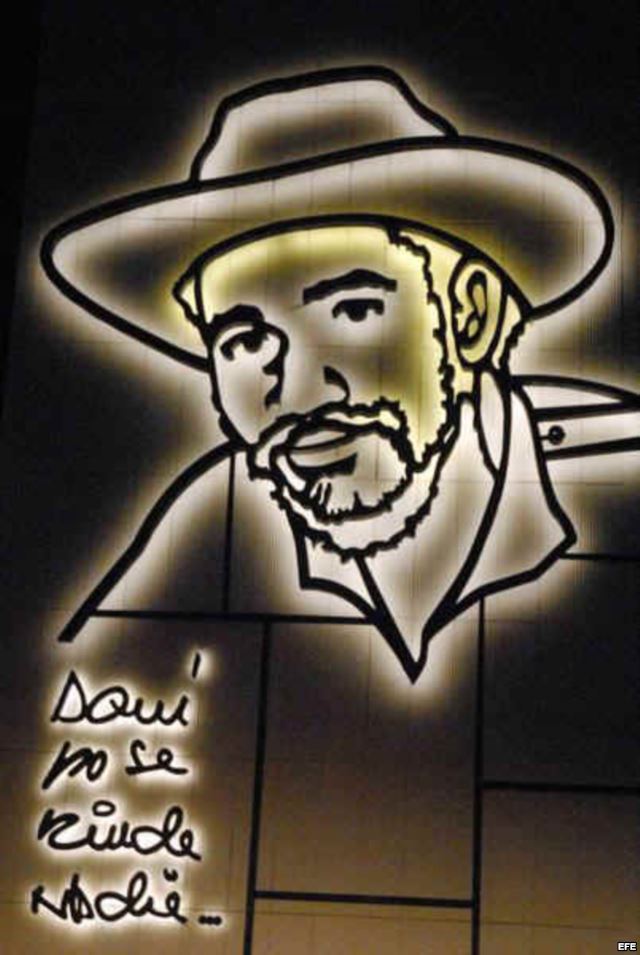 “No one surrenders here.”

With tremendous size and a weight of 15 tons, in Antonio Maceo Plaza in Santiago de Cuba, on the size wall of the Heredia Theater, this Tuesday the lights were turned on to inaugurate a steel frame that recreates the image of my father, Commander Juan Almeida Bosque. I think so much vanity generates ridicule, not respect.

It seemed shameful, like common thieves reuniting in the complicity of the night, for the event to be presided over by Commander Ramiro Valdés (member of the Politburo of the Communist Party of Cuba and the Vice President of the Council of States and Ministers), Lázaro Expósito (member of the Central Committee and First Secretary of the PCC in the province), local leaders and a small number of obedient family members who were selected not for love of the deceased but for their closeness to the office of General Raúl Castro.

Long before this inauguration, friends and the not-so-friendly, some to inform and others to annoy, sent videos me and photos via e-mail or social networks, of how it was being constructed and what this work of art would be.

I would like to thank each and every one of the people who worked on it, masons, builders, and those who kept me informed throughout the duration of the assembly. The painter, sculptor and designer Enrique Avila Gonzalez, author of this giant poster. I also thank the members of the musical groups invited, especially the magnificent interpretation of my father’s music by the young concert band from Santiago’s Esteban Salas Conservatory. Also the management of the theater for the piece of wall.

I know very well every stone of the Heredia theater, an important cultural center I watched be built and open its doors. On one occasion, cast in a team performing shows and with a little help, I managed, on the boards of Heredia, to realize an old dream, to be part of a tribute to my father. Music was his bliss, and what made him happy.

My father loved with devotion the great Oriente, Santiago de Cuba was his passion, and by association the Heredia theater was part of his avocation. Notwithstanding that I have always had a certain apprehension about the act, such as imposing an image on a people, without knowing in advance whether they agree or not. What I liked as a child is one thing, and it’s a very different thing not to respect the opinions of local residents. I can safely bet that nobody was consulted.

Some time ago I realized that everything in the world is relative, which for me is honor, for others it may be offensive. With some friends I share the indescribable rarity of having as a father a human who, rightly or wrongly, the government transformed into myth. It is difficult to accept, especially when the object to idealize, or hate, is simply someone you love.

For me, personally, this show provokes indignation, more from knowing that Raúl Castro collaborated in the death of my father with malice aforethought, ruthless deception which to my relief I discovered before he died. So if now the señor General, on going to sleep, feels one more ghost and wants to release one more piece of his questionable past, I tell him that my family, more than a sculptural relief, deserves to hear him ask forgiveness.  Me, no, I want to see him before a judge, to see him condemned.