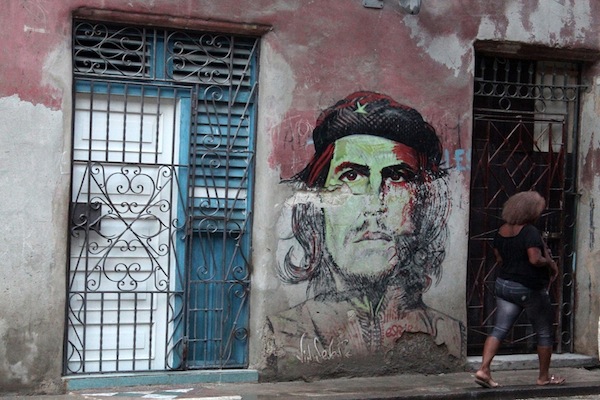 HAVANA, Cuba – Indians and Cowboys, heroes and villains, the good and the bad… these are terms often used in movies, soap operas and literature to classify polarizations of characters, placing them, by virtue of that dual machination, in hostile camps where, invariably, good triumphs over evil.

This same framework does not escape politics in its most simplistic interpretation, especially manifesting itself through the yardstick of a young and radical left, whose obstinacy is almost as astonishing as it is scary, by appealing to the nostalgic past and “better” times of the so called real socialism, when the Soviet era of influence extended over the better part of the world and even invaded, though not quite congealing, a reality so culturally different, in culture and in spirit, as that of Cuba.

It seems surprising, after the resounding disappointment of Eastern Europe’s “Marxist-Leninist” experiment, the proven economic inefficiency and widespread corruption of the model, in addition to the repression applied against any manifestation of free thinking, to find, among relatively young Cubans, who in addition consider themselves libertarians, such expressions, full of admiration and longing for that “beautiful and giant nation” as they refer to the defunct Soviet Union, especially in a social environment that is increasingly more distant to that monster’s, so such a stance is an anachronism similar to dancing a milonga* amid a rhumba carnival dance troupe.

Paradoxically, these diehard nationalists, whose common denominator is the absolute rejection of anything that smacks of “Yankee imperialism”, are the staunch defenders of what was once the metropolis of Cuba for thirty years, the USSR — that peculiar form that the Russian imperialism took for a time — and they don’t accept that a “bureaucratic elite” which held power, and particularly Mikhail Gorbachev, brought about “the betrayal of possibilities” of a socialist system that could not be sustained after 70 years of tight control over the economy, natural resources, political power and over society as a whole. They believe that in a few months barely a handful of bureaucrats swept off the socialist moral force and its achievements against millions of the “aided,” who later ratified at the polls the return to capitalism. That’s why our sleepless party animals are demanding another opportunity for the standardization and consecration of poverty. This is indeed the point: like postmodern Cathars, they demonize material wealth, as if poverty itself constituted supreme virtue.

Noting this, but being aware of everyone’s right to express their own political and ideological credo, which is what freedom is about — and also democracy, which these subjects distrust so, because it was born in bourgeois societies, and it’s fitting of them — we have to add that these are groups (the principle of the “collective” is essential) lobbying for the rights of workers, especially those of laborers, though they might not be, based on the absolute rejection of “capitalism”. They are so many other messiahs, especially those who worship that other ardent killer, Che Guevara, who, after executing so many Cubans, promoting so much violence in different regions, received a taste of his own medicine and made a disappearing act.

Their ideas and political strategies are, therefore, based on the old outlawry-Twentieth Century principle of socialism’s struggle (the “good”) against capitalism (the “bad”), where humankind — the workers, the “masses” — will achieve their due prosperity once the former triumphs over the latter. It doesn’t matter that we are already moving through the second decade of a new century, where knowledge, technological revolution, information and communications are essential, indispensable conditions for seeking global solutions for the present and the future of humankind; where political borders are increasingly blurring, and where the narrow concept of “capitalism” and “socialism”, “rights and lefts”, are not enough to define the complexities of an era that is giving birth — not without labor pains — to new relations and principles of global coexistence, including political ones.

But the infantile left (which, fortunately, is not the whole so-called “left”) is so caught up in flashbacks and in the contemplation of their virtuous navels that they have no clue.

Maybe that’s why they use trite phrases (as that kitsch one with an aura reminiscent of Guevara: “socialism cannot be built with the dull weapons of capitalism”) and, at the same time, they dusted off old and dull slogans and historical figures that were the authors or founders of the thought trends of which they are the self-proclaimed heirs, perhaps due to a congenital disability to establish some new paradigm of thought, better suited to the times. None of them has bothered to define what those “dull weapons of capitalism” might be which have allowed its continuation for over a millennium.

And it is not about denying true claims. I share, in principle, the critical attitude of those leftist sectors before the issue of foreign investments, be it at Mariel, in the field of tourism (hotels, golf courses, marinas, etc.) in various industries, in the field of agriculture or in other economic areas that this regime has systematically destroyed for 55 years. But, for the sake of the presence of the “transnationals” or because that “places us in the flux of capital and the global capitalist economy” — by the way, the only global economy is the capitalist economy, the “socialist” one is village economy, of whores and sugar mills — for, after all, I am definitively in favor of all that means prosperity, development and wealth, but Cubans on the Island are excluded from partaking in it, because such investments will only enrich the autocracy and its elite, and because workers will not even have the right to enter into contracts directly with those companies; on the contrary, they will be doubly dispossessed by the Government-State-Party through its employment agencies and by an abusive wage system.

At any rate, it is not seeking equality or in defense of socialism that thousands of Cubans leave the country each year, nor are those who risk their investments in a private enterprise inspired by Che or the USSR. It is well-known that true freedom lays in the full exercise of the capabilities of individuals, in their chances of success, not in the hypnotic miasma of ideologies. Let’s not blame capital for our own failures, because in Cuba there has not been any deadlier poison than that of the political discourse.  The Cuban Nation was forged on the desire for prosperity of her children, on the work and the talent of millions of them, not on the primacy of one ideology over another: such are the dull weapons that History has bequeathed to us.

Translator’s note: A milonga is an Argentine dance… as (in)appropriate in Cuba as another famous Argentine import.