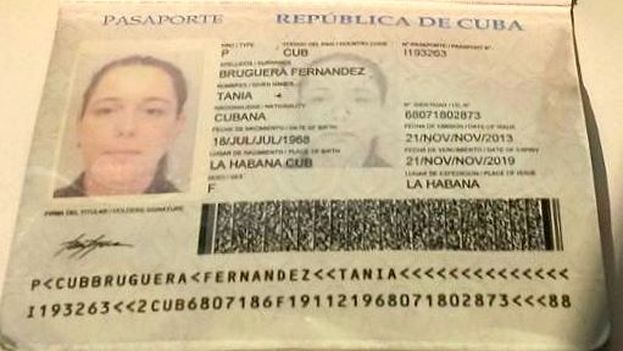 14ymedio, 11 July 2015 — The Cuban government finally returned her passport to the artist Tania Bruguera, who can now travel outside the island, she reported this Saturday in a statement on her Facebook site #YoTambiénExijo. The document had been seized last December when she was arrested before staging a performance of political art in Havana.

According to the statement, State Security and a police instructor returned her only passport, a Cuban one, to Bruguera at a meeting on Friday. However, the artist declared that she would not leave Cuba, “Until I have an official document in my hands that legally assures me I can reenter the country without problems,” which the Cuban authorities have promised to have to her within the next two weeks.

“My argument was never that I would leave Cuba: my argument is that there is work so that freedom of speech and expression exist in Cuba, so that violence against thinking different politically different is penalized,” Bruguera said in the statement.” In Cuba people should feel happy to speak their minds without fear of losing their jobs or their university careers, without fear of being isolated or going to prison. ”

The artist also expressed her wish that “one day the police will be in a proud demonstration of those who think differently from them. My argument proposes an amnesty and eliminating the figure of the political prisoner because no one would be punished for thinking for themselves.”

“My argument was always Cuba’s need for a civic literacy campaign where everyone knows and learns to defend their rights as citizens,” concludes Bruguera.

Since the Cuban government prevented her from staging her performance six months ago, Bruguera has had several run-ins with State Security. On June 8 the artist was detained along with 47 Ladies in White at the exit of Santa Rita Church in the Havana’s Playa municipality. A few weeks earlier, during the activities of the Havana Biennial, Bruguera decided to pay tribute to Hannah Arendt with more than 100 consecutive hours of reading, analysis and discussion of the book The Origins of Totalitarianism. The event was hijacked by successive acts of police pressure, a noisy street repair project outside the home of the artist and the subsequent arrest of her and several companions.