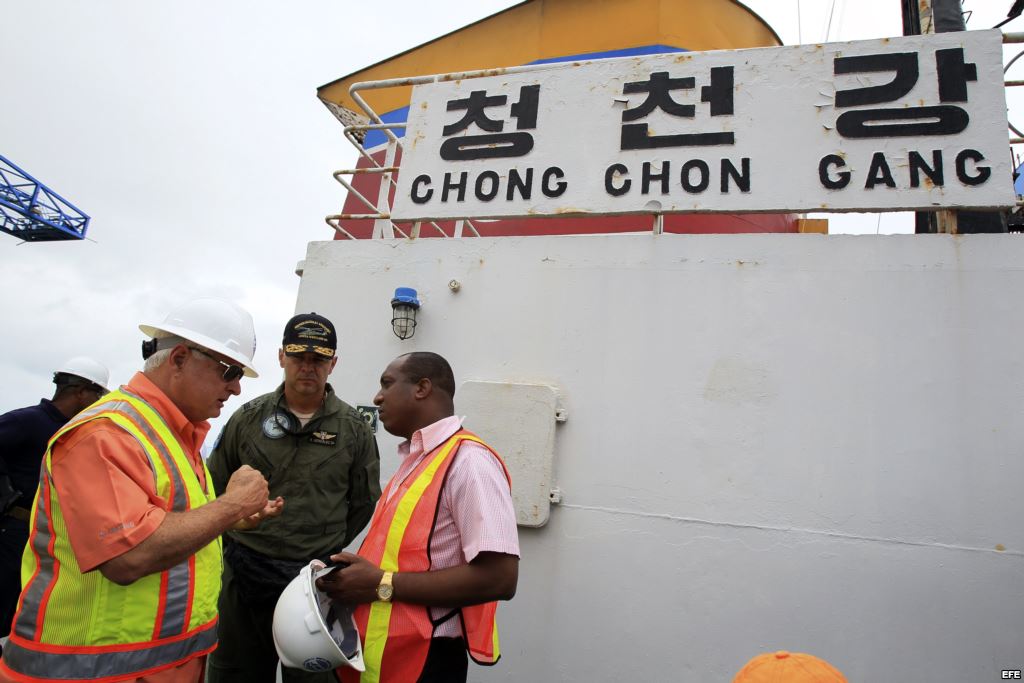 I wasn’t there, but then they told me and later I read that on July 11 the Panamanian authorities stopped a North Korean freighter sailing through the Caribbean to the Panama Canal. Bear with me, but I think that with that name (Chong Chon Gang) would have stopped anyone; knowing that today the infamous and raggedy boat had sailed from Cuba and its final destination, written on its “Road Map” (or the log of the sailing, according to the former inspectors of the whereabouts of the 32) was nowhere democratic and, much less popular, the Democratic People’s Republic of Korea.

That Havana would hide its arsenal under tons of sugar, and they were sending them to Pyongyang to repair them there, is logically credible but leaves questions.

It’s normal that over some determined period of time, planes, radar systems, anti-aircraft missiles or some other military or civic equipment, requires repair or heavy-duty maintenance. But, in this particular case, and seeing as this equipment was made in Russia, the question would be, why didn’t they send them to Russia if — according to what I understand — Cuba and Moscow maintain and even nourish a fluid communication at the highest levels.

To save money. That could be an answer that too many seems likely and offers a certain credibility. It is known that Kim Jong-Un accepts barter and that, as a common practice, North Korea repairs and modernizes this type of equipment in exchange for Cuba’s sugar or Myanmar’s rice. However, we can’t forget that at the moment when the unsayable Chong Chon Gang was stopped, the military park in questions (the two missile complexes Volga and Pechora, the new missiles in parts and pieces, the two MIG-21 Bis planes and the 15 engines for this type of airplane — made in the middle of the last century — traveled hidden under 10,000 tons of sugar.

Some people, looking to be argumentative, allege that all these military goods were very well camouflaged because of the two United Nations Security Council resolutions that prohibit its member states from transferring to, supplying, and servicing arms for Pyongyang. I’m sorry to rain on their parade and that absurd justification; but if the Island’s government (respectful like so much cackling about its commitments to peace, disarmament and respect for international law) would like to send its deadly toys to North Korean to be repaired there and then to be returned, all they have do to is to apply for the required permission from the commission that oversees that sanction in the Security Council.

All of which leads me to think that among those sacks of sugar, more than weapons, hidden truths were traveling, that were neither going to North Korea nor even thinking about coming back.