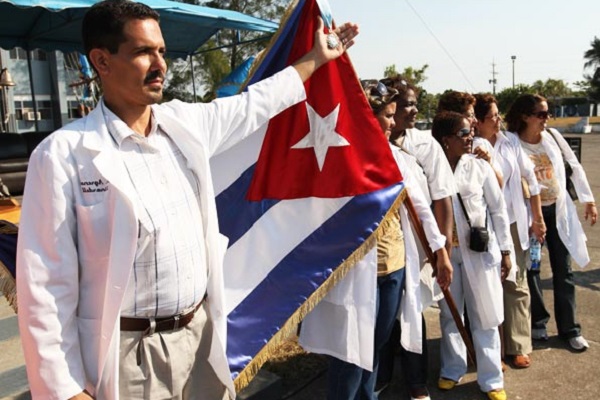 Cubanet, Roberto Jesus Quinones, Guantanamo, 16 February 2015 — A rumor is keeping  the medical sector in Guantanamo euphoric, and it provokes immediate outbursts of joy in hospital corridors, in homes and in every place the supposedly good news is known. No one knows the origin of the rumor nor its hidden intent.

According to those who are in charge of spreading it, very soon the government will increase the salary for doctors. And, as happens with every rumor, there are always those who know everything about it and affirm that the new increase will be put into force to try to contain the exodus of physicians abroad by way of a 30-day exit permit, a type of safe conduct that helps them flee.

These experts assure that the new increase will raise physicians’ salaries to 5,000 pesos per month (200 dollars), an astronomical pay in Cuba, but that they’ll only receive it if they agree to sign a document saying they will remain in the country for five or ten years without asking for the exit permit.

However, a few days after the rumor appeared, the voices of others begin to be heard. They speak clearly, affirming that not even with this increase, which would place the doctors in the vanguard of the Castro Communist labor aristocracy — now made up of Party and governmental bureaucracy along with the sportsmen of high performance and the high officials of the armed forces and the Ministry of the Interior — would they be able to contain the massive exodus of these professionals abroad. Above all to Ecuador, a country that doesn’t request visas and where there already exists a developing but prosperous Cuban medical community that has taken care of communicating to its colleagues on the Island the high lifestyle that is rapidly achieved in the land of Eloy Alfaro.

Because 5,000 Cuban pesos are around 200 dollars, a sum very inferior to what any Cuban doctor could earn abroad.

Between the well-being within reach and the promises of a prosperous and sustainable socialism, which no one knows when it will arrive nor if also there is another rumor or a new feverish chimera of the Cuban leaders, you don’t have to rack your brains to decide. Stupid people are more scarce every day, and the ideological teque* has been in intensive care for some time.

I don’t know what the government will do to stop this flight of doctors, which has a direct effect on one of its most trumpeted social accomplishments — currently in a very precarious state, among other things because of the lack of specialists — and on the export of health services, which is perhaps, together with tourism, the most lucrative activity of the Cuban economy at this time.

In case the rumor becomes a certainty, let’s see what happens with the other professionals, because the flight of qualified personnel is not limited to the medical sector. Pandora’s Box is open, and the government doesn’t give any signs that will let us believe it is possible to close it and, above all, to convince us.

*Translator’s note: “Teque” is literally a spinning top, and is used in Cuba to mean old, worn out, political harangues.