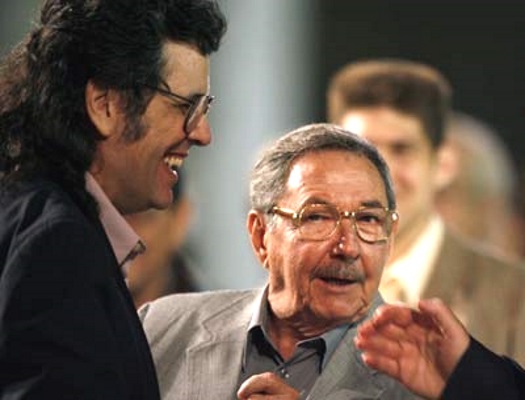 Cubanet.org, Victor Manuel Dominguez, Havana, 24 June 2015 – Abel Prieto rides again. Not as the author of two little novels whose names I cannot remember. Nor as the ex-president of a union of writers and authors more sold to the powers-that-be than self-help books at the Havana book fair, or reproductions of “Still Life with the Leader” at an art exposition committed to who knows what.

Never ever as that ex-minister of culture, with long hair and little sense, who declared that poets like Raul Rivera could be jailed, but they would not show up shot in the head at the edge of some ditch. Now, such a sad political figure, he rides as the cultural adviser to the Cuban president.

As the Spanish writer Arturo Perez Reverte said in his article “Kultural Pajes” from the book With Intent to Offend, “The more illiterate the politicians are – in Spain those two words almost always are synonymous – the more they like to appear in the cultural pages of the newspapers.”

It happens here in Cuba, too. The difference is that here the lines fuse, and writers and artists are declared politicians by decree and illiterate by submission. Our politician-intellectuals also write or “sing” to the authorities, who sign a document to send innocents to the execution wall.

Therefore, Abel Prieto’s words to the Spanish daily El Pais are not strange although they are cynical: “The idea that we live in a regime that controls everything that the citizen consumes is a lie, an untenable caricature in this interconnected world.”

Saying that in a nation where the citizens are only interconnected, against their will, to registration offices, personnel files, surveillance centers, State Security and Interior Ministry monitoring and control departments or crime laboratories is a bluff.

The assertion that Cubans are at a high level of international connectedness would be pathetic, if it were not insulting, when we have not yet even overcome the barrier between the produce market and the stove, and they censor films, prohibit books, and pursue and seize antennas across the length and breadth of the country.

The Dark Object of Desire

According to Abel Prieto in El Pais, “We are not going to prohibit things. Prohibition makes the forbidden fruit attractive, the dark object of desire.” We had and have enough experience. From the prohibitions on listening to the Beatles or writing to a relative abroad to access to the internet.

Apparently among the secret guidelines issued by the Communist Party to its cadres in order to mend the nation is the obligatory reading of the poem Man’s Statutes by the Brazilian Thiago de Melo which in one of its verses he says: “Prohibiting is prohibited.” In Cuba only outwardly?

The reality is that Abel contradicts himself. While on one hand he assures that we are not going to prohibit, on the other he says that “we are never going to allow the market to dictate our cultural policy,” when everything is sold, from Lennon’s spectacles and Che’s beret to the sheet music of the National Anthem.

The strategic shield against cultural penetration designed by Abel (under the guidance of Cain: the State) is that it works against banality and frivolity so that people learn to differentiate, apparently, among the “exquisite” passages by Baby Lores about Fidel and the subversive themes of the Cuban rappers Los Aldeanos* (The Villagers).

Which is to say that, disguised as a demand for quality, absolute control of what citizens consume continues. They will not prohibit them, they will only give them the option, for the good of their cultural appreciation level, of seeing or hearing what the Cuban Minister of Culture, assisted by the Minister of the Interior, schedules.

Among Abel’s proposals against banality and frivolity is a “weekly packet” that includes films like The Maltese Falcon and Gandhi, the new Latin-American cinema, Kenneth Branagh’s Hamlet, and a symphonic cocktail by Silvio Rodriguez with the Small Daylight Serenade, that delusional song about “I live in a free country/which can only be free…”

Also to be enjoyed are films by Woody Allen and other offerings that combine “things with cultural density and entertainment material” far from racism and violence, as if in the films about mambises – Cuba’s independence fighters of the wars of independence — the guerrillas and international soldiers fight with cakes, and meringue is spilled instead of blood.

The dark desire for total control by the State is intact. Beyond the linguistic juggling that government spokesmen perform within and outside of Cuba. And without denying a minimal (fortuitous) breach in what is consumed, we still are very far from choosing freely what we desire.

When Abel wonders, in his interview with El Pais, “What are we going to do with Don Quixote?” perhaps Marino Murillo and the company answer him: Send him to run an agricultural cooperative, assisted by Sancho and Rocinante. Or, even better, have him manage the little restaurant La Dulcinea on Trinket Island.

Victor Manuel Dominguez is an independent journalist. He lives in Central Havana.

*Translator’s note: Lyrics to the Los Aldeanos rap video linked to are available here (in Spanish)