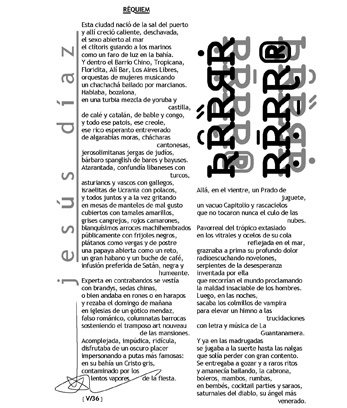 This city was born of the harbor’s salt

and there it grew hot, irreverent,

its sex open to the sea

And inside Chinatown, Tropicana,

a chachachá danced by aliens.

in a muddy mix of Yoruba and Castille,

of gypsy and Catalan, of Babel and Congo,

and all this patois, this creole,

barbaric Spanglish of bars and bayous.

Stupefied, she confused Lebanese with Turks,

Asturians and Basque with Galicians,

all together and in sync screaming

on tables of tasteless linens

a great cigar and a gulp of coffee,

An expert in contraband she dressed

or well she wandered in rums or rags

and prayed Sunday at dawn

in churches of Gothic deceit,

sustaining the tricky art nouveau of the mansions.

she enjoyed a dark pleasure

in her bay a gray Christ,

contaminated by the slow vapors of the party.

There, in the womb, a toy Prado,

a vacuous Capitol and skyscrapers

that never touched a clouds’ ass.

in the stained glass and ocelli of its sea-reflected tail,

her profound pain grazed above all

listening to soap operas on the radio,

snakes of the hopelessness invented by her

that traveled the world proclaiming

the insatiable evil of men.

she showed her vampire fangs

elevating a hymn for the slaughters

to the music and lyric of La Guantanamera.

And in the break of day

she even gambled her butt cheeks

which she usually lost with cheer.

She gave herself to joy and strange rituals

and awoke dancing, the fucker,

in shindigs, cocktail parties and balls,

the devil’s revelry, her most revered angel.

Nothing moved her, not even

the blood her children offered

by burglarizing the Tyrant’s Palace.

She kept carousing, it was said

that nobody could romance her,

shut her music off and leave her

A little later the warriors came

to make her forget centuries of partying?

With what wile did they manage to put a spell on her?

She fell in love with virtue like a whore.

Asked for forgiveness on her knees

to expiate her multiple sins.

Sacrificed her congas, her lies,

her scented soaps, her trifles,

She ate a pair of eggs on a frugal table.

She waited in a long line, interminable,

and to her great dismay, sometimes,

while with a saint or a man

she suffered the delirious nostalgia of the frolic.

Her pronouncement was not enough.

The sons of bitches, us, her bastards,

denied her three times. She never again had

a sip of reflecting alcohol

to take to her lips in her frenzies.

And if she screamed with thirst, we did not hear her.

We were clamoring for the world