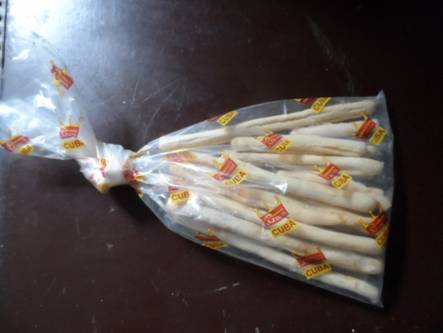 On my planet the abnormal is normal. For example, when we go shopping — whether it be in those dark, poorly ventilated stores, whose scant merchandise is priced in CUP (Cuban pesos), or the well-illuminated, air-conditioned hard currency stores, whose somewhat greater selection is priced in CUC — we are met at every step with surprises.

A few weeks ago a friend who was visiting brought us some wonderful bread sticks, which had been purchased at one of the Silvain stores. They came wrapped in an enormous plastic envelope much larger than the product it contained. When I looked more closely at the package, I noticed it carried the Caribbean Queen label, an indication the packaging would normally be used for shellfish.

Last week there was a knock on my door from a “dark bag” vendor I know, who was selling lobster tails. They came wrapped in a plastic package identical to the one containing the bread sticks.

None of this is surprising. They are simply examples of the “details” we have been experiencing for many years now. We have become so accustomed to them that they seem perfectly normal.

In the 1980s some doctors wrote prescriptions on the backs of paper labels from cans of Soviet condensed milk. It was also quite common for Fiesta shampoo (the only kind available in those days) to come in the same amber-colored bottles used to package household cleaning solution. It was also the era of conjoined products (the kind that were not easy to move). In other words if you needed deodorant, you had to also buy a machete and a can of shoe polish because the three were sold together, or “conjoined.” Fortunately, that phase had passed by the mid-1990s when dollar possession was decriminalized and hard-currency stores were opened.

But we are still subject to inappropriate packaging of some products sold in both currencies. What is one to do? We already know that socialism is not perfect! In spite of comrade Murillo’s insistence to the contrary, what is quite clear is that this is not really the option we Cubans would prefer. To dispel any doubts, he should just drive his brand-new car past the embassies of any number of countries, slow down, lower the tinted windows and take note of the long lines of citizens crowded outside the consulates, applying for visas in an attempt to “escape.” Many of them are the same people who fill the plazas, answering “the call of the Revolution.” As one might conclude, not everything is as it seems.