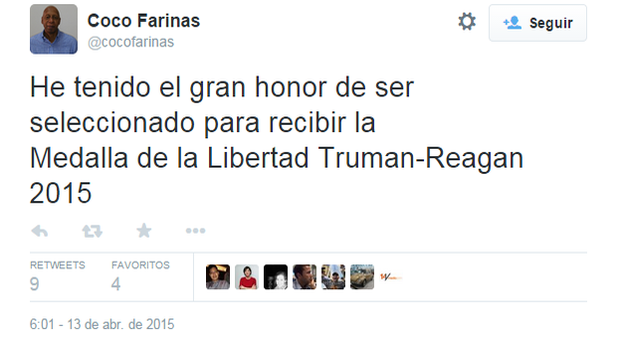 14ymedio, Havana, 13 April 2015 — The Cuban activist Guillermo Fariñas has been selected to receive the 2015 Truman-Reagan Medal of Freedom, as he himself announced Monday via his Twitter account.

The Victims of Communism Memorial Foundation, a non-profit organization based in Washington DC, offers this award annually to individuals or institutions involved in the fight for freedom and democracy and opposed to communism and other forms of tyranny.

Since the first edition of the award, in 1999, those who have received this distinction include Pope John Paul II (in 2005), former Polish President Lech Walesa (in 2006) and former Secretary of US Defense Donald Rumsfeld (in 2012), among others.
The Victims of Communism Memorial Foundation aims to honor the more than 100 million victims of communism worldwide and the freedom of those still living under totalitarian regimes.