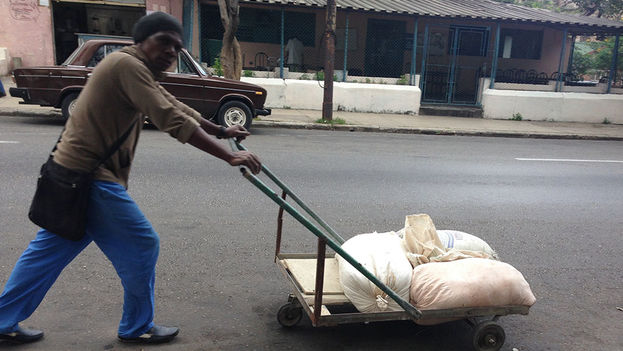 14ymedio, Generation Y, Yoani Sanchez, 22 May 2017 — The saleswoman described her merchandise in a murmur: loggerhead turtle steaks, beef and shrimp. The man salivated, but replied that he could not buy any of those products, the most persecuted in the informal market. Every opponent knows that the authorities would want to try him for an “economic crime,” and perhaps that saleswoman was just the bait.

The techniques used by an authoritarian government to control citizens can be as varied as the fertile imagination of the repressors. Some are designed in air-conditioned offices using studied methodologies, while others arise on the fly, from seemingly fortuitous situations.

Are the economic constraints that we live under a calculated scenario to keep Cubans locked in a cycle of survival? Do so many prohibitions seek to leave us civically paralyzed, feeling ourselves guilty and with one foot in a prison cell?

Beyond the conspiracy theories, officialdom has managed the informal market as trap for the nonconforming, a framework for gathering information about the deep Cuba, an element of blackmail against its citizens and a lure to hunt down political opponents.

Although it is a practice that has been engaged in for many years, in recent months there has been an increasing tendency to accuse activists of alleged economic infractions

The Plaza of the Revolution has turned its bad economic management into another way of keeping society in its fist. It knows that families will do everything possible to put food on the table and will turn to the underground networks to buy everything from their children’s shoes to the dollars that at the official currency exchanges are taxed at 10%.

In many cases it is just about waiting, like the spider who knows that sooner or later the little insect will fall into its sticky threads. State Security only has to wait for a dissident to buy coffee “under the table” or to dare to have the bathroom retiled by an unlicensed tile setter.

Although it is a practice that has been engaged in for many years, in recent months there has been an increased tendency to accuse activists of alleged economic infractions. They are charged with crimes that ordinary Cubans commit every day under the patronizing eyes of the police and with the complicity of officials or state administrators. However, in the case of an opponent, the law has the capacity to be narrower, more rigid and more strictly observed.

In all international forums, Raúl Castro’s government boasts of not having political prisoners and it supports this argument by severely, but politically selectively, criminalizing such trivial matters as keeping four sacks of cement or a few gallons of fuel at home, without being able to show the papers that prove they were purchased in state stores.

Journalist Henry Constantin is accused of “usurpation of legal capacity” for working as a reporter in an independent publication, but dozens of ex-military are appointed managers of tourist facilities without ever having studied hotel management or business management. None of them have been reprimanded for serving in a position for which they are not formally qualified.

The lesson is that no matter what degree of economic illegality you commit, keep your mouth shut and don’t criticize the government

Karina Gálvez, a member of the Coexistence Studies Center, is being prosecuted for alleged “tax evasion” during the purchase of her home. However, before the new tax imposed on real estate transactions came into force, thousands of Cubans thronged the notaries to complete their paperwork under the previous tax laws, far removed from the real estate market rates. Not one was sanctioned.

Eliécer Ávila, leader of the Somos+ Movement, had his home broken into in a police raid and is charged with the offense of “illicit economic activity.” His “crime”: possessing a laptop, rewritable discs and several disposable razors. Unlike those thriving artists who import the latest iMac from the market or “Daddy’s kids” – children of the regime’s leaders – who have a satellite dish to watch Miami television, the activist committed the offense of saying he wants to help change his country.

The lesson is that no matter what degree of economic illegality you commit, keep your mouth shut and don’t criticize the government. It is not the same to buy beef in the informal market when you pretend ideological fealty to the regime, than it is to do the same when you belong to an opposition movement.

The black bag can become a wall, a noose, a hidden trap for those who do not applaud.