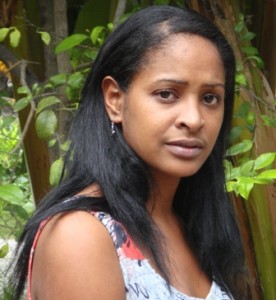 Larisa Diversent, 30, returns to the fray. Having received her law degree four years ago, this young black lawyer always seems to have a loaded agenda. Since 2007 she has been one of the busiest and best independent journalists in Cuba.

She writes for several sites about legal topics and has a blog for legal advice. In early January, Diversent created an office where she provides legal assistance to any person, without concern for ideology or religious creed.

It is called Cubalex. Its headquarters is in Laritza’s half-built house south of Havana, located in a poor village known as El Calvario. Surrounded by clumps of bananas and lemons, cats and a cloud of mosquitoes, the lawyer welcomes guests in the kitchen, the only place of shelter already repaired.

“Not only do I advise on the legal steps to follow, but elaborate opinions. It is hard work that takes me 12 hours a day,” says Diversent sitting with her laptop on a high chair in front of a coffee thermos and a mountain of documents.
Right now she is working on the case of two citizens who served a five-year sentence for a comment that they were trying to hijack a boat in Cienfuegos province, 180 miles from Havana, and escape to the United States.

“The interpretation the Cuban legal system gives current law is unfortunate. They often use it as an instrument to punish people to set an example for others. The worst thing that is happening in Cuba is that so many citizens, and the authorities themselves, in many cases don’t know the laws that emanate from the Constitution. With Cubalex and my newspaper articles, I hope to let people know their rights. And to demand them,” comments Laritza.

Most of the requests she receives are from people with a proverbial legal illiteracy. Humble people who sometimes live in difficult places and are like blind bats when faced with the bizarre legal machinery of the island.

Supportive lawyers like Laritza try to lend them a hand. Despite her youth, she has become an expert in constitutional rights. And is convinced that the Cuban government blatantly and systematically violates its own laws. She talks to dissidents, bloggers, groups from Cuba’s incipient civil society, and also engages in protracted legal arguments for individual defendants.

This Havana lawyer is never happier than when she is able to stop an unjust eviction of a desperate family who asked for her legal aid, or when the courts are forced to reconsider sentences passed. She celebrates her small victories against the monolithic power of the judicial system by drinking coffee without milk in the kitchen of her half-built house in El Calvario.

Among texts eagerly awaited by her avid readers in blogs and websites, caring for her 11-year-old son, cooking, washing, ironing, taking care of her husband and now a legal aid office, she has just discovered a new formula: multiply the 24 hours by six. The best part of Cubalex is that the advice does not cost a penny. Go then, to Laritza Diversent’s house.