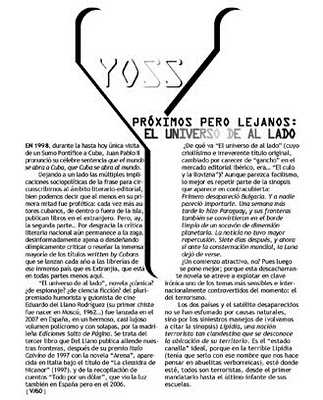 Near but Distant: The Universe Next Door

Leaving aside the multiple sociopolitical implications of the phrase to concentrate on its literary meanings, we can say that at least the first half of the phrase proved prophetic: every day more Cuban authors, from both inside and outside the island, publish books abroad. But, that still leaves the second part…. National literary criticism, sadly, still brings up the rear, refusing through either ignorance or disdain to critique or review the vast majority of books written by Cubans that are launched every year in bookstores in that enormous country that is Abroad, which is to say everywhere but here.

“The universe next door,” comic novel? spy literature? science fiction? by the award-winning humourist and scriptwriter Eduardo del Llano Rodríguez (his first joke was to be born in Moscow, 1962…) was released in 2007 in Spain, in a beautiful, almost luminous polychrome covered edition, by the Madrid publisher Ediciones Salto de Página. This is the third book published by Del Llano outside of our frontiers after publishing his novel “Sand” in Italy in 1997, for which he won the Italo Calvino prize in 1997, and the compilation of short stories “Everything For a Dollar” which also saw daylight in Spain; but in 2006.

From what comes “The Universe Next Door” (whose creoleism and irreverent original title, changed for lacking a “hook” in the Iberian book market, was “The Ass and the Drizzle“)? Although it might seem very easy, the best way to explain it is to repeat part of the synopsis that appears on the back cover:

First Bulgaria disappeared. And it didn’t seem to matter to anyone. A week later Paraguay did it, and its borders also converted themselves into the clean edge of a tunnel of a planetary dimension. The news didn’t have the slightest repercussions. Seven days later, and right now before worldwide consternation, the Moon stopped being seen.

An attractive beginning, no? But then it gets better; because this hilarious story dares to exploit in the key of irony one of the most sensitive and internationally controversial themes of the moment: that of terrorism.

The two countries and the disappeared satellite haven’t been blurred by natural causes, rather by sinister doings of (we’ll return to cite the synopsis) Lipidia, a terrorist nation so clandestine that the location of its territory is unknown. It’s the ideal “mob state”, because in terrible Lipidia (it has to be so with that name that makes us think in wordy grandparents), be wherever it may, everyone’s a terrorist, from the Prime Minister down to the last child in its schools.

After establishing that between one disappearance and another there is a period of seven days to discover the secret location of Lipidia and prevent another nation from disappearing, the CIA forms the most absurd commando that one could imagine, whose peculiar characters are one of the things the author got right.

There is the recurring Nicanor O’Donnell, who this time could be the perfect action hero … if he weren’t so cultured. Nick is the closest thing to a protagonist, given that the fragments of his diary included in the story are the only passages in the first person. The girl on the team is Chrissy (another name familiar to Eduardo’s readers, from the story “The Kiss and the Plan“), a beautiful and evil genius agent-hacker when she’s not working as a model. The leader is Dante, a mulatto fan of Engelbert Humperdinck and (born in Lipidia!!) who, although he has his map tattooed on his back, can’t remember the location of his Fatherland.

Team Rodríguez is completed by Homo rodens or born victim, for whom everyone he meets provokes desires to beat or cure them; and Mercury (HG), an almost-normal black man, except that he’s a specialist in martial arts of every kind happily married to Sarah, a woman from a parallel universe with whom she performs experiments on her physical brother.

The improbable fortunes and misfortunes of this commando worthy of having been recruited by Groucho Marx (sic synopsis, again) happen with astonishing and hilarious speed: while they fly towards Afghanistan (what better place to start looking for terrorists?) they stop a lone aerial pirate from blowing up a plane with a bomb disguised as a minor god. Then, following the loss of Chrissy’s suitcases and of Chrissy herself during a stopover in Madrid, they make contact with her kidnappers: a Muslim commando heatedly focused on retaking the Moon, which they suppose to be stolen by “western devils” and just stopped allying themselves (that’s the pure science fiction part) with them in the middle of a classic fight in a Munich brewery.

And the unexpected incidents don’t stop. Arabs and westerners together fly to a China which is debating the iron-clad official censorship of the People and the enchanting opening to a more consumer-oriented capitalism. They have, for the first time, contact with “the evil ones” (Lipidian people) through an explosion from which they save themselves by pure miracle, and follow them to Havana(!!), a place where — coincidentally? — one of the Muslims, Ali, studied Medicine years before and was the lover of Xiomara (lovingly known as “Muñuñi”), a sculptured and sweet mulatto woman who still lives in Centro Havana and whose brother Lazarito is the most inept State Security agent one might imagine.

Surprised and captured by the Lipidians, who reveal contemptuously that Lipidia isn’t in Havana, they are driven about no more and no less than to the Pink Room of La Tropical, where six evil-looking blacks are to take charge of them. Except that instead of the criminals they looked like, the “chardos” turned out to be the salsa band Matason, and one of them, to top it off, the best friend of Ali during her student days, by which …

It’s enough, because, as bad as it seems to certain critics, the objective of a critic is not to summarize a story, and the most surprising thing about “The Universe Next Door”, as was to be expected, remains reserved for its last third, a true tour de force of ironic dramatic effects and the most attractive crescendo of unexpected unmaskings until launching in the absolutely amazing outcome, which, as good readers suspected from the first pages, involves science fiction of hard and parallel universes … Although not in the form one would have supposed, which is the best of all.

Some purist of realism might be able to question the seeming unreality of this adventure, but implausible? Why? Didn’t everybody swallow the chemical and nuclear arms of Saddam Hussein and applaud Bush’s attack on the dangerous Islamic threat? When reality overtakes fiction, there’s nothing more for fiction to do than to make jokes about reality. Eye for an eye, laugh for a laugh.

Full of erudite cultural references, both pop (Shakira and Barbra Striesand) and “grand culture” (Tarvosky and Dave Lynch), this novel succeeds not only in capturing the attention of the reader if not, which is most difficult, maintaining it. And, despite its irreverent sniping against all flags, it can be equally annoying to extremists on the right and the left, it doesn’t stop surprising, and above all it makes one think, with its final moralizing, about the many faces of the unique, monstrous world of terrorism.

With “The Universe Next Door,” Del Llano here resumes the paradoxical path of the thrillers and political fiction in the style of Frederick Forsythe or Tom Clancy, who already in years past gave such good results in the hilarious novel “Virus,” winner of the April Prize, written in collaboration with Walter Ego of the never well-pondered NOS-Y-TROS, Luis Felipe Calvo.

Nonsensical in its disproportion, without pretending credibility, rather glued in the absurd, like all works of Del Llano, this novel leaves us with the disturbing sensation that not only next door, but also our own universe is completely beyond logic. That reality isn’t as real as it seems, nor the fantasy so fantastic as those elitist critics believed, the ones who dismiss science fiction as “escapist genre” before confessing that they don’t understand it, in the classic attitude of the fox that can’t reach the grapes: “Anyway, they’re too green.”

With a prose of careful, almost mathematical correction, full of footnotes, like the (are these really necessary?) clarifications of the slum slang of Havana for the Spanish reader, “The Universe Next Door” is at one and the same time a pleasant read and one that makes you think.

The only question then is,  is then, as in his day before “Nicanor’s Hourglass”: when will there be a Cuban edition, so that historic and national readers of Del Llano might be able to also follow the new and nonsensical adventures of O’Donnell, secret agent (even in Havana), without having to pay in convertible pesos for the pleasure of its reading? 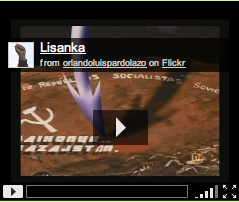