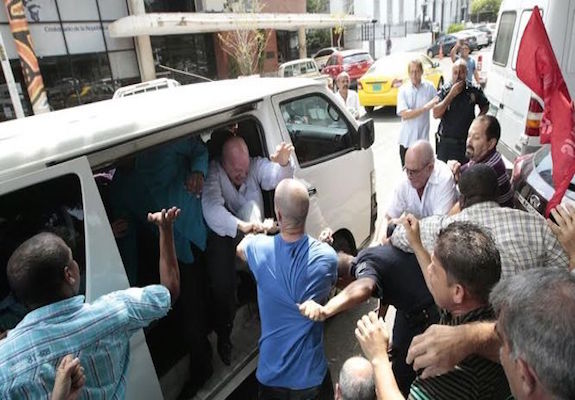 The opponents were putting flowers at a bust of Jose Marti. Cuban diplomats took part in the beating. The Castro-ites also interrupted the Civil Society Forum. See the video.

Cubanet.org, 9 April 2015 – A pro-Castro group today attacked Cuban dissidents in the heart of Panama City, where on Friday the Seventh Summit of the Americas will begin — in which Cuba will have a starring role due to the rapprochement with the United States; President Raul Castro as well as representatives of the opposition have been invited.

The dissidents claimed that on leaving a tribute at the bust of the Cuban national hero Jose Marti in Porras Park, located some yards from the Cuban embassy in Panama, they were surprised by the Castro followers.

“We went to the Jose Marti bust to leave a wreath. There were several people there who began to scream obscenities at us and tell us to leave. A moment later several people from the Cuban embassy came out and physically attacked us,” said Leticia Ramos, a member of the Ladies in White.

As she reported on the America Teve channel, a man identified as a diplomatic officer struck her. Orlando Gutierrez, Jorge Luis Garcia Perez, known as Antunez, and other opposition leaders were there also and were attacked.

These incidents are in addition to another confrontation that occurred in the opening session of the Civil Society Forum, which is being held parallel to the Americas Summit, when the governmental delegation decided to withdraw. “We as a civil society are defending our own, we cannot be in the same space” as the dissidents, Luis Morlote, a representative of the Cuban Artists and Writers Association (UNEAC), told reporters.

Morlote and several dozen Cubans with Cuban flags and pro-government banners, left the venue and expressed their indignation at the presence of opponents like Guillermo Farinas, Manuel Cuesta and Leonardo Calvo. The Cuban delegation said it was leaving the initial session but would return to the roundtable discussions that would take place Friday.

Cuba’s presence for the first time at the hemispheric event and its collateral activities was marked by the polarization of Cubans supportive of the revolution – the majority group – and the opposition attendees. “And no, we don’t feel like being a US colony” and “Out, out,” the pro-government Cubans shouted for more than an hour and a half; they also handed out a tabloid in which they accused the dissidents of being “mercenaries.”

The demonstration heated up the room and delayed the arrival of many of the forum’s invitees from other countries. “We expect reciprocity and understanding by all who come to our country,” said the annoyed Ruben Castillo, coordinator of the forum. “Civil society is going to participate in an elevated dialog,” he added. The forum, opened by the Panamanian president Juan Carlos Varela and the secretary to the OEA (Organization of American States), Jose Miguel Insulza, takes place from April 8 to 10 and seeks to make recommendations to the presidents attending the seventh summit.