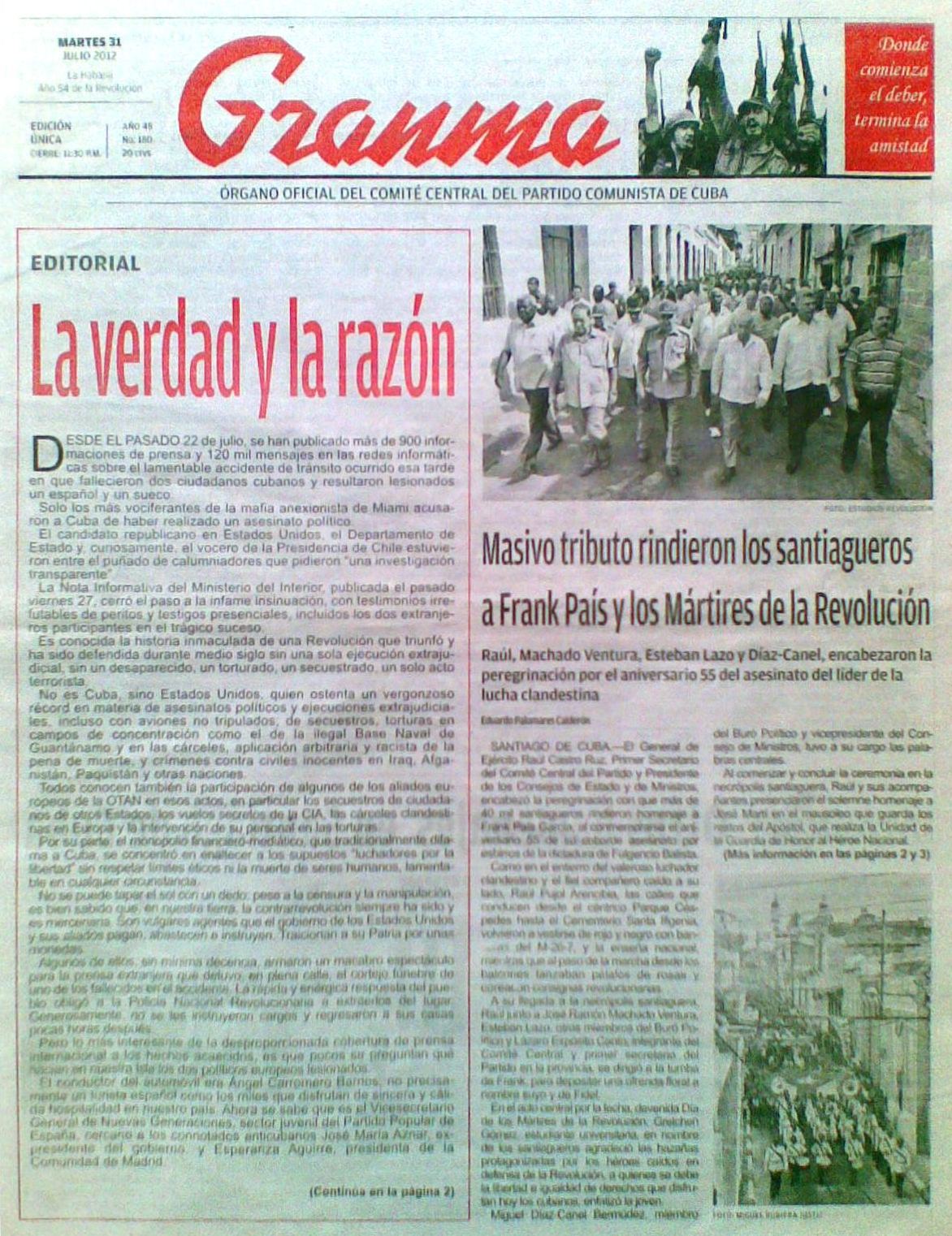 The newspaper Granma provokes, slapping its readers’ faces with a fistful of falsehoods. I am not saying they use fallacy on a regular basis, but sometimes they publish opinions with a manipulative slant. These must be refuted because, if we remain silent, we are ourselves guilty of lying through inaction or omission.

On July 31 of this year the journal, an “official organ of the Central Committee of the Communist Party of Cuba,” published an editorial entitled “Truth and Reason” to address the repercussions and doubts resulting from the deaths in an automobile accident of the well-know opposition leader, Oswaldo Payá Sardiñas, director of the Christian Liberation Movement,and Harold Cepero Escalante, another member of the organization.

It is the same old tedious conversation, with its glossy praise for the faded revolution and its abicú* political party. And, as usual, the purpose is to say that the United States is responsible for whatever discordant opinion or criticism that is generated in the world towards the dictatorial Cuban regime.

One is taken aback to read in the fourth paragraph of the editorial the writer’s statement that “the immaculate history of the Revolution is well-known.” Did the journalist forget about the unpunished crime involving the tug boat March 13th in July 1994 in which 41 people lost their lives, 10 of them minors? Or those who were gunned down in Cojímar earlier that same year?

Perhaps he ignored the 2003 shooting of three people, who were not attempting homicide, but rather were trying to emigrate using a state-owned boat? Were they shot in order to send a message? Is it for wanting to leave Cuba or for having an opinion different from that of the system’s officials that people lose their dignity or become objects of mistreatment? To what impeccable history is he referring?

To the one who punches and verbally assaults peaceful, defenseless women such as the Ladies in White, cowardly impeding their right of reply? Or takes water away from Orlando Zapata Tamayo – who was on a hunger strike, not a thirst strike – so that he would die? Perhaps he is referring to the “humanitarian action” against another striker, Wilmar Villar Mendoza, and the failure to provide necessary and timely hospitalization.

Perhaps the editor-in-chief has fed so long at the revolutionary udder, drinking the milk of amnesia, that he has forgotten about the trips abroad, the ease of buying a car or of being assigned one, the abundant supply of gasoline to go with it, the shackles on his writers, the appearances on national radio and television, and other such perks.

They are the calves of the revolution. Rather than being faithful to Cuba, they are the ones who serve and are loyal only to the party in power. The ones who did not and do not respect a family’s grief after a tragic death by interrupting the funeral procession of a respectable man like Payá in order to put on their usual show of mobilization to train and motivate their followers and send the message that the street belongs to the revolutionaries and not to all Cubans, as it should. It is the same mechanism, established years ago, with its running routine that get activated automatically, and it is worn out by the old mentality of those who do not want anything to change. The following excerpt underscores the type of lies found in this editorial:

“You cannot block out the sun with your finger.** In spite of censorship and manipulation, it is well-known that, in our country, the counterrevolution is and has always been mercenary. They are vulgar agents that the government of the United States and its allies pay, supply and instruct. They betray the Fatherland for a few coins.”

It seems that something is twisted in the minds and thinking of Cubans living here who defend the dictatorial Cuban model. Or is it the privileges that I mentioned earlier? Another of the meanings of mercenary — in addition to the well-known definition that applies to the troop or soldier that for a stipend serves in the war against a foreign power — it alludes to working for money, perceiving a salary for work or payment for services.

A refrain says that thieves think that everyone robs. The opposition and independent journalism are diverse and pluralistic and, as a ridiculous result, tries to think that we all think and act the same way; as well as the followers of the Castro regime think and act differently, according to their personalities, preferences, and levels of political compromise. I’m not doubting that defending to the death the 53 year old failed system,

*Abicú: A term for children who have an incarnate spirit that does not die, and are under a particular spell that can cause the premature deaths of their siblings, or prevents them from being born. Ceremonies are performed to “dispel” the curse. By extension, it is said of a person who is dirty, jealous or not well-intentioned that “He is an abikú.”

**Translator’s note: An expression which roughly means: You cannot deny the obvious.