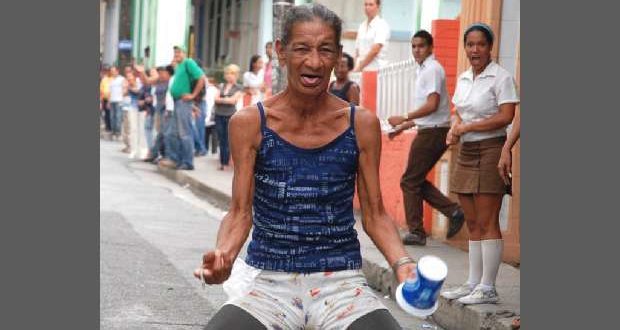 Ivan Garcia, 1 May 2016 — Guillermo tries to run away, to avoid the stones the kids are throwing at him, as if he were a doll stuck on a target, but his legs, which are atrophied and beginning to go gangrenous because of his diabetes, can’t respond to the urgent messages from his brain.

So he tries to hide behind some small bushes, but the stones keep flying around his head. It’s four in the afternoon on a normal day in La Vibora, and, without anything better to do, the pair of youngsters do their target practice with an old man of over 80 who can hardly support himself on his crutches.

People eating pizzas in a cafe in Heredia Street, on the corner of Acosta, watch what’s happening, like spectators who have come to watch someone being stoned to death in Iran.

Some women try to persuade the kids to stop. But a hail of insults is hurled at them, like “Go and find husbands, you old lesbians,” which they shout as they clear off.

The old man, a beggar who hangs around the neighbourhood and who tries to deal with his hunger by looking through rubbish bins, bent over on the pavement, can’t understand why the kids hate him.

“I don’t interfere with anybody. They are abusive. And it isn’t the first time. Almost every week children and youngsters throw stones and insults at me. I only want to find some food in the rubbish. It’s Fidel and Raúl Castro’s fault,” he says, and starts off on a fiery tirade against the autocratic brothers.

Some onlookers take off. Others record what’s happening on their cellphones. It’s the fashion now to record on mobile phones whatever quarrel or degrading spectacle is going on.

Or a body which fell off a Legal Medicine truck on 23rd and G in Vedado, and that’s where the crowd went to record what happened. Two years ago a youngster was killed by a train on a level crossing at Café Colón and Calzada de Diez de Octubre, and the rabble started filming before help arrived.

For Eulogio, a customer in a state-owned cafe in Galiano Street, it is worrying how many beggars and crazy people there are in the capital, and the audio visual activity that occurs each time something happens.

“Two months ago a drunk who slept in doorways died, and people, instead of calling the police or an ambulance, recorded it on their mobile phones, as if it was nothing serious. And every day there are more layabouts and mad people, who are always dirty and hungry, in the city. What’s the government doing? I ask myself,” says Eugenio.

There is an alarming number of beggars in Havana. The government calls them “itinerants,” and, if we believe an official study, the number is between 2,500 and 3,000 in the country.

But José Carlos, a geriatric nurse, says this information doesn’t accord with reality. “Just in 10 de Octubre district, I have dealt with more than 200 itinerants sleeping on the street.”

The number of destitute drunks and poor people is unknown. On the corner of Carmen Street, opposite Plaza Roja de la Víbora, a dozen needy people, alcoholics and madmen gather early in the day in the entrance to a warehouse finding a selection of things in the rubbish bins.

From books on Fidel Castro’s speeches, Sovet-era alarm clock parts, clothes and used shoes to old computer parts. The prices range from 5 to 20 pesos. After that, they use the money to drink the worst kind of home-made rum or eat something hot in a stinking state-run greasy spoon.

According to a People’s Power delegate in Central Havana, “there have been discussions with the authorities in the province to find a solution to the growing number of layabouts, people collecting raw materials without a licence, with serious problems of dementia, who are swarming around the city. But, except when a foreign leader visits the country, when they round them up, wash them and feed them in a state hostel, the rest of the year they don’t do anything. Or very little.”

The Catholic church, and other religious orders do what they can. “Every afternoon we give a snack or a meal to various needy people. Many of them sleep in the street. We would like to do more,” admits a nun from Mónaco parish.

Some of the beggars were common criminals and are violent. Others are leftovers from a revolution which left them in the ditch.

Papo, a homeless guy who sleeps in boxes in a park in Reparto Sevillano, claims that he fought in the clearance of bandits in Escambray and Angola. And look how I am repaid by the government for whom I risked my life.”

Nobody remembers Cubans like Papo. Not in the official press, nor in the Communist Party’s future plans. They are always forgotten.

And now, with cellphones, they have become a spectacle for kids who, without any sense of feeling, record them and upload them onto YouTube or Facebook. Human beings who could be their parents or grandparents.