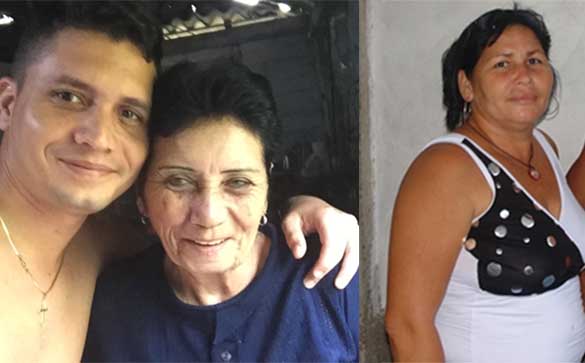 Somos+, Eliecer Avila, 8 May 2016 — First of all I want to send a huge kiss to all the mothers of the world, and especially the Cuban mothers, many of whom cannot sleep peacefully knowing that a mysterious black wolf called State Security stealthily monitors their young children day and night.

Among these mothers is mine. Or all of mine… because I have several. The one who gave birth to me from whom I was separated by divorce when I was three (although we still see each other), the one who raised me, my grandmother (Mima), my aunt Arelis, perennial guardian of the entire family; at least two memorable stepmothers whom I love very much, and dozens of mothers who have appeared to me recently because according to them they pray for me every night and have adopted me as their son.

But today I want to talk about Mima, because she is now almost 70 and every day she fills my thoughts. It has been five months since I last saw her, because of the 450 miles that separate us since the end of 2013 when I came to live in Havana. At times it’s hard even to talk on the phone because I know that sooner or later she is going to ask the question that causes a lump in my throat, “M’ijo… when are you coming?”

Recently, seeing me come through the door is her moment of greatest happiness. I could almost say she lives for this day. She keeps for me in the fridge a little piece of each chicken she kills on the yard, spared from her own little pounds (a tiny checkbook), and I don’t know how she manages to have for me “pineapple juice that you like, powdered milk and even a little piece of red meat…” All luxuries that she can’t give herself during the time we are apart.

When I see her, along with my grandfather (Tata) I can’t help feeling some remorse and a sense of guilt. I don’t know if I have to the right to build my own life, going far away to look to improve to, for access to culture and work opportunities. I have tried a thousand times to convince her to come with me, even if just for a time, because I want to give her the first day of the rest in her entire live and take care of her as she always did me, but there is no one who can get her off the farm and she is an expert in manufacturing pretexts…

I also wonder how it is that, living on an island, we can feel such a strong sense of distance. I am convinced that it would be a whole different thing if instead of this absurd government we had a normal one. We would have access to hundreds of technological tools that would allow me to see her face and talk with her a little bit at night, persuade her to eat more and work less, ask her how the services went in the little church she attends, where sometimes she even preaches and constantly fasts for her children and grandchildren. Now my aunt tells me she has become infatuated with the idea of my grandfather “having women out there…” Which he denies saying, “If only…” ha ha ha. How I would love to laugh and enjoy every day with them.

This situation makes me think of the thousands of children who are in other countries, while their mothers are here, sometimes sick and always getting older. The family crisis this country has been experiencing for decades is really terrible.

This morning I went to Monaco Park, one of the wifi points in the Capital, and it was even fuller than usual, which makes sense. But what most struck me was a woman of some 90 years in a wheelchair and with an IV drip at her side. She got out of a Moskovich car with the help of several family members who put a tablet in front of her to share with her what was probably her last wish: to see her son who lives in Orlando whom she hasn’t been able to hug for 27 years.

On the other side of the screen was a gray-haired gentleman surrounded by two sons and a newborn granddaughter, crowded together on a couch, trying to say something but unable to do so. Several minutes passed without a word, the tears never stopping and then a sister’s cracking voice, “Mama, say something, the [internet] card is going to run out…” The old woman tried to compose herself and then the words I hear so often and that pain me emerged, “M’ijo… when are you coming to see me?” and she added, “I’m waiting millet.”

I couldn’t take it any more, I closed the computer and left to walk the mile and a half from the park to my house. Determined to find a way to go and see my grandmother and my mother this month. It is really very hard that so many Cubans are forced to bear this damned circumstance, simply because some men retain for themselves the desire to keep this country in the dark ages of technology on one side and in material and spiritual poverty on the other, distancing thousands of children from their mothers every day.

I will never understand by Fidel preferred to separate rather than unite, to discriminate rather than protect, to hate when he could have used his charisma to support the Cuban people to cultivate love, togetherness, the family and pride in being Cuban.

There is a great deal we can do for our mothers as a new generation that clings to its natural right to participate in the politics of the country. We hope that very soon we will have that opportunity and we will live up to such an honorable responsibility.

Here I share photos of my mother and grandmother. And I invite everyone to share on this day images of your mothers, those here and those who care for us from above, those far away and those at our side. Let us fill all the spaces today with their sweet faces.