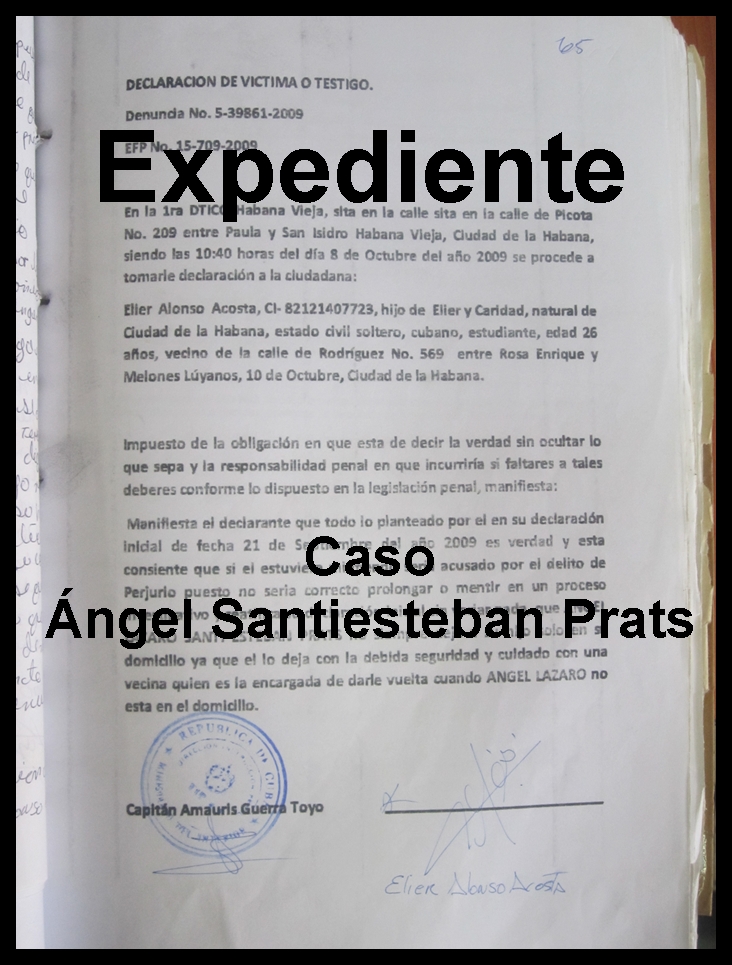 The mechanism of annulment is cleanly bureaucratic: You can’t hire an attorney without having completed the dossier. The prosecution prepares its case in the dungeons.

Havana, Cuba.  In the doorways of Avenue Acosta, in the neighborhood of La Vibora, some faded beings sell aluminum scouring pads, Band-Aids and little boxes of matches. A few meters away, crossing Calzada de Diez de Octubre – formerly Jesus del Monte – is the former police station of Acosta and Diez de Octubre, which now advertises itself, by a lighted sign, as a Territorial Unit of Criminal Investigation and Operations of the Ministry of the Interior. The latest news about the writer, Angel Santiesteban, places him in the cells of that sinister place.

Another writer, the Czech Milan Kundera, victim in his time of the same procedures, pointed out that our only immortality exists in the archives of the political police. In this city of changed names, where poetry is a military choir, where the violation of human rights is called anti-imperialism and there is thoughtless defense of socialism, and where some nameless beings without a voice sell scouring pads in order to eat, I think about my friend who is experiencing the same awful misfortune.

Except for Daniela Santiesteban, his 18-year-old daughter, sufficiently bewildered and frightened to not want to speak with the independent press or the dissident friends of her father, no one else has seen him nor can corroborate that he hasn’t been maltreated, or that he really tried to escape from prison, as the authorities say.

The Territorial Unit building has checkpoint surveillance. It seems to be the entrance where the detainees are taken to the dungeons, which are in the basement. Those who have left that prison say that below there are around 70 cells. And that’s where they look for confessions in all the cases. It doesn’t matter if they don’t know the first thing about the crimes that the official presents to them. The dossier can be false. It takes time to complete, so that in order to obtain the auto-inculpation, the false confession, no attorney can be present.

This is the beginning of total domination: The detainees can’t count on having the right to an attorney from the beginning of the charging process. The mechanism of annulment is simply bureaucratic; you can’t hire a lawyer without having a dossier and the case number. The trial is prepared underground.

It’s in these cells where you can be interrogated at any time, where no family member can have access unless he’s also a prisoner and where even your diet has been thoroughly studied with the goal of crushing your feeling of having rights. It’s there that your dossier would be assembled and the charge against you enumerated in the most total incommunication. Hannah Arendt already said it, when in 1961 she formulated the expression “banality of evil” as a phenomenon that is characteristic of every dictatorship: The first essential step on the path that leads to total domination consists of suppressing the juridical person in Man.

There’s another front entrance to the building. Going up the stairs you arrive at a reception area that is garishly green, with a sepulchral silence. Ornamental plants, always the same: miserable malanga vines. Portraits of Castro and other allegorical figures of July 26 provide ambience, so you don’t have any doubt that you’re in Hell. In this mournful place, the guard refuses to answer my questions about the situation of the detainee. He says that only his family can see him, and that he is accused of “detainee evasion”. “I’m not giving you any more information”, he concludes. The expression “detainee evasion” appears to be nonsense. It’s not clear what the accusation is. Neither does he answer when I ask his name and military rank, in spite of the fact that I told him, before he asked me for my identity card, who I am and what I do.

I know Angel. Before being taken to prison he had time to leave the island, but that’s not his intention. His awareness of not being guilty of the crime that the political police fabricated in collusion with his ex-wife, Kenia Diley Rodriguez, who had already made threats that she was going to destroy him, made him believe until the last moment that it wasn’t possible that the authorities would go so far in the consummation of evil.

On one of those afternoons when we talked about this, he told me how at the beginning of the whole process, neither he nor the people who would serve as witnesses, making him believe that they would stand by him when his accuser, Diley Rodriguez, told her story, thought it possible that a case would be opened against him. But he armed himself with a dossier with the case number. Later, his lawyers told him that it was impossible that a trial would take place, because that would not be logical. And there was a trial. And the sentence? It was announced to him previously during a detention, by a minion of the political police named Camilo – famous for his sadism – with the exact number of years to which he was condemned. Five.

So that this isn’t the first dossier prepared against Angel Santiesteban.

The Lawton military settlement, which presents itself as the Ministry of Interior Housing Construction Company, was the last place Santiesteban was seen. So I went there to follow up. The prisoners, through a fence, repeated to me the authorities’ version, but no one could tell me that they really saw him being transferred from the prison. They only affirmed what the authorities said.

A friend of the writer named Reinaldo Gantes Hidalgo was “visited” by State Security, in a move that can be part of the new judicial fabrication, to ask him if he knew where Santiesteban was. Another person, who asked me not to reveal his identity for fear of reprisals, was detained for a week, accused of complicity without any evidence, but he hadn’t seen Santiesteban either. And it’s clear that State Security wouldn’t spare itself some arbitrary detention with which it could propagate the version that matches their perverted goals.

Gantes Hidalgo told me that after the visit of the son of Colome Ibarra, the present Minister of the Interior, to the military settlement of the regime prison, in his position as the head of the MININT Housing Construction Company, and after the escape of a boatman, an inmate who managed to get to Miami, three guards kept watch on Santiesteban at all times, even when he went to the bathroom. All of which was again inconsistent with the official version.

If there’s a relationship between this visit and the increase in vigilance, we can only deduce this from the question that Colome Jr. asked him. With much sarcasm he questioned him about the woman who called the Directorate-General of Jails and Prisons to denounce Santiesteban for the possession of a laptop and a cell phone hidden inside the prison, and about a supposed plan to escape. From there they also started the records. With these notices it’s not very probable that Santiesteban would have improvised an escape from an island where there are police guarding almost every corner, and boats patrolling 24 hours a day thanks to Venezuelan oil.

All this points to a set-up. After which his son, Eduardo Santiesteban, 17 years old, conceded an interview to Karen Caballero, a journalist from Marti News, where he denounced the manipulation of State Security in the trial against his father. And so he began to demolish the first dossier. Let’s remember that during the trial, they used, as pretend proof, his declaration that Angel didn’t accompany him home in order to claim, in a rare sophisticated use of ubiquity, that he found him at home with his mother, Kenia Diley. As if by being absent from one place he would be fatefully in another.

So that the prosecutor’s maliciousness, added to the fact that trials aren’t independent, had the result of an unjust sentence based on ridiculous reasoning, twists and lack of proof.

Until Angel Santesteban commnicates his version, we can’t believe the authorities, who are dependent on a government of which it can be said that not only do they lie, but they also hardly ever tell the truth.

Have Amnesty International declare the dissident Cuban, Angel Santiesteban, a prisoner of conscience. Follow the link to sign the petition.