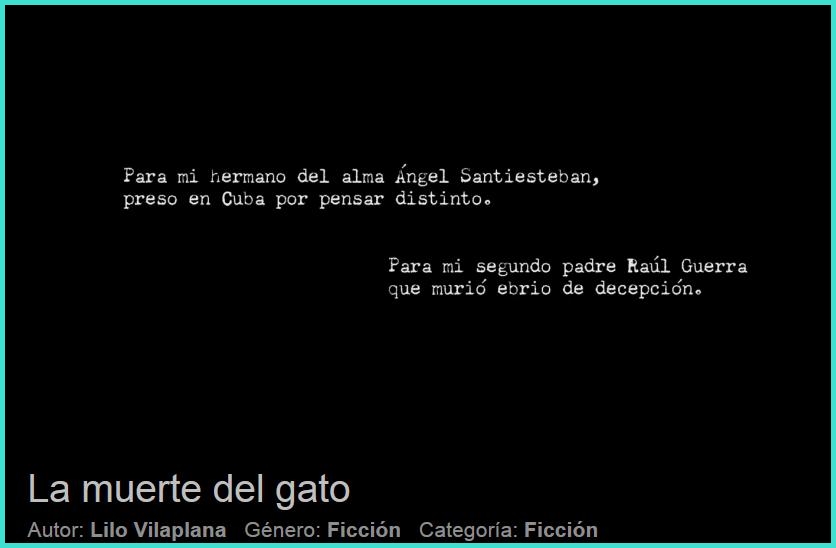 For my soul brother Angel Santiesteban, prisoner of Cuba for thinking differently.

For my second father, Raul Guerra, who died intoxicated with disappointment.

The Death of the Cat

The Death of the Cat is much more than an exceptionally accomplished work of art by Lilo Vilaplana.  It is an unambiguous argument against the Castro dictatorship that has plagued Cuba for fifty-six years.

It deeply impacts Cubans who have lived that period, those who even if they have not lived it suffer even today the same painful reality, and the non-Cubans who are moved seeing how the Castro propaganda has fooled them also while all Cubans are prisoners of the big island jail.

Dedicated to Angel Santiesteban and Raul Guerra, it deals with a work of fiction inspired by real events, contextualized in the day after the shooting of General Ochoa but that takes great care with even the smallest details managing to recreate on a Bogota lot the miseries of one Havanan.

Details as “trifling” as to have covered the floor with a paper that mimics the tiles that populate Cuba.  And even the wretched roll that Cubans eat, many preliminary experiments were needed until obtaining what appears in the short film, seeking not to exceed the weight and to be true to what the impoverished people eat.

It is not easy to create intentionally so much destruction, poverty and neglect as the Castros have caused in over five decades.  Painstaking craftsmanship by Lilo’s team has managed to “destroy” the setting, making it so true to life that more than one person will believe that it really was filmed in Havana.

The director’s merit, and it is great, is not only artistic.  The art, it is true, has brought the short film to first level international festivals.  But it has not only shown the world Cuban talent, which is infinite and in Cuba has no possibility of being developed unless one wants to end up censored, marginalized or in prison.  The short itself, filmed in Colombia, is true testimony that in order to exist, it must have been born on another horizon where liberty reigns.  And just for this reason, the performances by Jorge Perugorria and Coralita Veloz, both residents on the island, are doubly meritorious.  You have to have a lot of guts to participate in such a film and continue living in Cuba.

The fact that The Death of the Cat is shown in the CANNES or GOYA festival, among others (KRALJEVSKI FILMSKI FESTIVAL, Serbia; FESTIVAL IBEROAMERICANO DE CORTOMETRAJES ABC.ES, Spain; FESTIVAL LATINOAMERICANO DE VIDEO ROSARIO, Argentina; PORTOBELLO FILM FESTIVAL, United Kingdom; FESTIVAL PIRIAPOLIS DE PELICULA, Uruguay; TRINIDAD + TOBAGO FILM FESTIVAL, Trinidad and Tobago), means that hundreds of thousands of people from all over the world can learn the reality of Cuba, which tries to hide it at all costs, and I refer not only to the misery, but to the most terrible thing:  a people subjugated to a brutal dictatorship, for the violation of human rights is its denomination of origin.

Seeing The Death of the Cat and voting for it at FIBABC means, besides recognizing Lilo Vilaplana’s talent, an act of patriotism, because his participation in the Goya Festival will help open eyes to the reality of Cuba for a great number of people in the world who have no possibility of seeing it with their own eyes.

Certain that Angel Santiesteban would ask you to support Lilo Vilaplana by voting for The Death of the Cat if they did not have him isolated as they do, I ask it in his name.

To see and vote for The Death of the Cat, follow the next link: 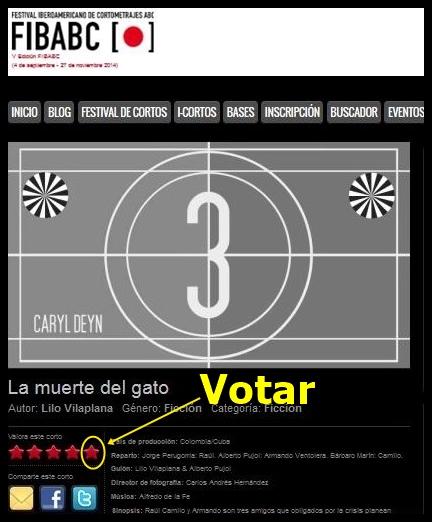 Finally, through my son’s cell phone, on the visit he made me in recent days where they have me incarcerated, I was able to see the short film “The Death of the Cat,” by Cuban director Lilo Vilaplana, living in Colombia for more than a decade, a place where he took — besides his talent, craft, some friends and his family — the bitterness that he suffered first hand, totalitarian logic processes, and that now, as a mature creator, he feels the duty to expose, first as literature and now in film.

The traumas lived by Lilo, which he carried in his soul like a mother who travels pregnant, began to flower in that second country — Colombia — which opened its arms to his stroke of talent and effort in the productions.

After a decade of successes, now he can afford to produce these short films; the script of this particular one is based on one of the stories from the collection “A Cuban Story,” which saw light, also, after he emigrated.

Many viewers will confuse its geography and think that it was filmed in its totality in Havana, because at the beginning the character Armando is seen walking through its streets, in the great performance by Albertico Pujol, who was filmed by another colleague, at Lilo’s request, because of the impossibility of his entering Cuba.

Then the brilliant edition would be harmoniously connected with the rest filmed in Colombia, thanks to the plausible set design by excellent professionals who thought of even the most minute detail, and which helped to color the Cuban reality at the end of the eighties decade of the past century — on the eve of the officially named “Special Period” that would uncover the worst penuries ever lived by the Cuban people and that, in a snap, changed the perspectives of a nation deceived and repressed for decades.

To lend context to the story, it is worth remembering that Lilo chose the day after the execution of the Hero of the Republic of Cuba, Brigadier General Arnaldo Ochoa, a circus spectacle by the Castro brothers to entertain the people, to make them forget their hardships and resist taking to the streets in protest.

It was also a lesson for the high military command — on the other hand no less important — to remove the danger of those who had feathered their leadership, and who imitated the habits of the Castro brothers, their mentors, for those “that life was for enjoying at any cost.”

Finally, once the officers “diverted from the principles that the Revolution pursues” were punished, it was said in the official press that the complaints by the government of the United States had to be put to an end at once, complaints which accused Fidel Castro of being part of international narco-trafficking that introduced drugs into its country.

Destroying those men who could testify about the regime’s consent to the participation — and with the most notorious drug lords, like Pablo Escobar himself — they sealed an opprobrious chapter, and — as if it were little — they exterminated those who could create a seditious plan against their government and compete with brother Raul Castro for military power.

Amid this national morass, the artist that grows within Lilo is preoccupied with the little things, apparently inconsequential in the eyes of most, in order to reflect them in the art, like hunger, the need for a political transition, the loss of societal values, the separation of family, and the painful scars, exposed, in this case, in the character of Armando, who has no news of his son who launched himself to sea on a raft, a long time ago; not knowing his whereabouts, he supposes that he did not reach the Miami coast and lost his life.

The story walks the tightrope between social criticism and artistry, between melodrama and sensitivity, managing, happily, to emerge unscathed avoiding the pitfalls of trying to tell the deep suffering of each actress, actor and production team, except the young actor Camilo Vilaplana, who thanks to his parents, managed to grow up far from that social catastrophe.  In the end it manages to ward off, although it always suggests, the conviction of those responsible for the desperate reality; that judgment it leaves in the hands of the public, particularly the Cuban public.

Also without making it obvious, it awakens that unavoidable fine humor in Cubans although the worst occurs.  The cat is the trophy for their real salvation and objectives; adding meat to their food source is vital for them and, in this case, the black pussycat becomes a symbol of the worst, because it is also vengeance for the oppression that they feel because of its owner, the neighborhood snitch.

The masterful performances by Jorge Prugorria as Raul, Alberto Pujol as Armando, Barbaro Marin and Coralita Veloz, as Camilo and Delfina, respectively, ride the scene, in a brilliant team, to a worthy height, artistically speaking, which leaves a taste of pain instead of pleasure.

We are grateful for the effort of the Vilaplana family and the artist friends that joined the project because in the death of the character Armando, we kill part of the shadow that still pursues us from those hardships, and in the suffering and tears of Raul and Camilo, our own tears flowed, in the full exercise of personal exorcisms.

These days, the short film has been invited to participate in the Cannes Festival; in spite of the pain of our lives reflected on the screen, knowing that the guilty dictatorship still maintains power for more than half a century, each time the Cubans wandering the world in search of freedom and opportunity overcome the fear of being pursued in whatever corner of the planet where they try to hide, they triumph, above all with the weapon of art, the most effective of all.

Receive my embrace and thanks for the unmerited dedication, from your brother Angel from the Lawton settlement.