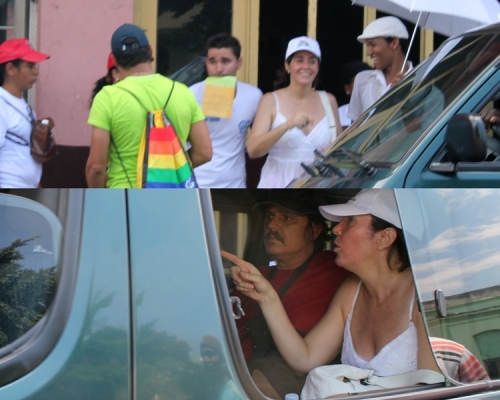 I have spent days waiting to see if the official press is going to publish a report, or a snippet, mentioning the fact that Miss Mariela Castro was in Santiago de Cuba as part of the Cuban campaign against homophobia.

Since this is not a news blog (and knowing that even if it was I do not have the ability to cover all the developments around me) I have had to wait.

On May 17th, the date which Cuba celebrates Farmworker Day, an enormous fair took place in Santiago de Cuba where souvenirs, posters, and pamphlets dealing with homophobia were distributed.

Miss Mariela Castro, with an entourage of CENESEX specialists, presided over the activities. In the emblematic Plaza de Marte, in the general barracks of the large baseball crowds (epitome of machismo) pamphlets were handed out, songs were performed, and certain people who, in one way or another, have felt excluded or singled out because of their sexual preference had hours of escape.

However, the campaign was not mentioned in the official media. Many people, upon seeing the diverse multitude of excited people under the protection of the General-cum-President’s daughter, watched with shocked faces.

The key of the discord due to so much fuss seems to be that Miss Castro (Mariela) shoots up into the air and makes allusions without properly pointing out those who, through official procedures, committed the worst homophobic acts in the nation’s history. But it’s clear that she would have to ask the heads of her family: Why so much intolerance?

For a moment, it’s as if she were accusing the flags and the origins of so much hate towards gays and lesbians in Cuba.

I’m sharing photos of her and others which her group of body guards allowed me to take. There was a foul mood in the air, with so many people laughing, as if it was a fair, and shocked while “daddy’s little girl” traveled throughout the island with a slogan which people will soon forget.

What we would have to counteract would be intolerance, of any kind of preference whether it is sexual, nutritious, dress, economic, sport, environmental, politics? Did I write politics? No, I must be dreaming. Miss Castro (Mariela) would not go so far.