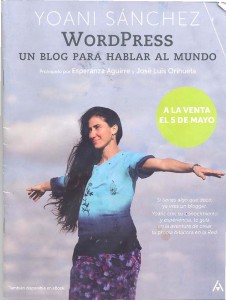 Last May I was overwhelmed when browsing in the apartment of Yoani Sanchez I came across her book Word Press: a blog to talk to the world. Three years earlier I had noted her famous blog (Generation Y) and, stimulated by it, I opened my blog, Island Anchor, also hosted on the platform Cuban Voices. The connection continued with the sessions of the Blogger Academy, occasional meetings, calls and text messages and my collaborations in Voices magazine, created by Yoani, Reinaldo Escobar and Orlando Luis Pardo Lazo.

The volume struck me with its compositional structure, didactic sense, the effective selection of expository texts, the eloquence of the illustrations and the overall coherence, both technical and casual, all of it “so Yoani,” whose human warmth cohabits with a scriptural acuity. The pragmatism of her civic proposals, her passion for new technologies, her citizen journalism and her commitment to what happens on the island, always from a personal viewpoint that is no stranger to wonder and the need to seek.

Word Press: a blog to talk to the world is a compendium of accelerated learning from Yoani Sanchez, the curious and avid linguist, fascinated by “the mysteries of cyberspace,” and whose banner freedom of expression. It is also a gift for beginners and an instrumental doorway, perhaps for the methodical carpenter to test the tools that free — and release — us from the information banality and dreams of domination of despots, these young men who damaged the lives of millions of people and converted the nation into a hacienda that supports them.

The work, of 463 pages, 20 chapters, 2 prologues, Editor’s Note, Glossary, Bibliography and Index, is a reference manual of educational value, a brick of paper that outlines her own experience with her blog, interacting with readers and the media and how this universal Cuban woman — recognized for her talent and dedication to others — learned to do it all. If anyone thought there were some kind of “maneuvers” around the prizes Yoani has been awarded from outside the island they can put that idea to rest. Yoani has succeeded because she convinces with her writings and computer knowledge.

Written at the request of Eugenio Tuya, editor of the publishing house Anaya, who rates the outcome as excellent and praised the clarity of exposition and “charming amiability” of the author, the book is intended for “all who dream of exposing their life’s travels through a blog and especially those in difficult situations who need to communicate with the world and be encouraged to express themselves freely.”

No wonder the Spaniard Esperanza Aguirre advises in his prologue that Yoani Sanchez, “In teaching us to use the tools of information technology, gives us an exciting lesson … about our duty to always open new windows, whatever the difficulties, a juggernaut for freedom. “

José Luis Orihuela, author of Cuaderno.com, evokes the Internet as the XXI century printing press and the blog Generation Y as “the paradigmatic representation of the network as a technology for freedom and the blog as a personal press,” to which he adds that “Yoani has extended her passion to many others inside and outside the island” and that she and her blog “are no longer just about technology, not only about the literature of the everyday, and have become a symbol of peaceful resistance to oppression, in a tangible demonstration of the power of words.”

“This is a book about the tool that has made possible the Revolution of Yoani Sánchez, Word Press, written for people like her: those who don’t know technology but have things to say, those who want to communicate and have no other means than the most simple and powerful: a blog.”

Perhaps because of this and because “the network is no longer a space for consultation and has been converted into a space for participation in the social environment,” Yoani’s book can not circulate on the island, where it is seized by customs officials, recalling those lists of medieval inquisitors bent on shaping thought and censoring those who did not assume the prevailing orthodoxy.

The list of contents would be enough to stimulate the search for the next installment from the best-known blogger in Cuba. Attractive and suggestive titles such as: The Birth and Consecration of Word Press; The Map to Install Word Press; The Viscera or the Administration Page; Appearance and Design of the Blog; Learning to Live with the Commentators; the Trolls and other Creatures of Cyberspace; Categories and Labels; URLs and Links, Multiplatform Blogs…

Through these themes lie the road ahead and the liberating door for those who accompany Yoani on her wanderings, real and virtual. They just have to dare. Not surprisingly she claims that “the highest purpose of mankind will not have to wait for someone’ who will open a space where you can show yourself. You will not need a bureaucratic permit. You will not need to amass a fortune or have a menacing army backing you up … You would not even need to be under the umbrella of a political party … Here you have a window, or rather the carpenter to build it … “