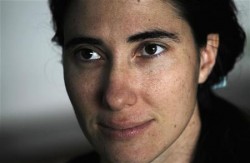 Yoani Sánchez visits Miami. It is the most difficult stop in her long tour. Everywhere, like a bullfighter hailed after a good afternoon, she has been carried on the shoulders of the crowd. She will also triumph in Miami, but her task will be a bit harder.

I get the impression that a huge majority of Cubans like her and respect her — I count myself among them — but there’s no shortage of those who oppose her for various reasons, often totally irrational.

Yoani has made dozens of appearances, granted hundreds of interviews and has successfully confronted the mobs of supporters sent by the Cuban dictatorship in every city where she has been invited to speak.

In more than half a century of tyranny, nobody has been more effective in the task of dismantling the regime’s myths and exposing Cubans’ miserable living conditions.

It is a paradox of life that, somehow, the rude and vociferous attitude toward Yoani shown by these aggressive bullies — though unpleasant during the incidents themselves— has served to feed the interest of the communications media and foster the support of notable political and social sectors.

These maniacs, accustomed to the Cuban environment, where no vestiges of freedom exist, don’t understand that trying to silence Yoani, insulting and slandering an independent journalist, a fragile young woman shielded only by her words and her valor, is counterproductive.

Yoani’s weapons have been sincerity, a crushing logic, an innate ability to communicate, and her own attractive personality. That is, the same features that gradually attracted, first, the curiosity of the major media and institutions — Time, El País, The Miami Herald, Foreign Policy, Columbia University — and later the admiration of millions of readers throughout the world who found in her chronicles a balanced description of the impoverished madhouse called Cuba.

The regime of the Castro brothers, convinced (or at least intent on convincing others) that behind every criticism lurks the hand of the United States, capitalism or dark economic interests, tried unsuccessfully to demonstrate that Yoani was a puppet of the CIA., the Prisa Group or some artificial manufacturer of prestige.

None of that. As usually happens, Yoani’s talent, unpredictable luck and the attacks from the dictatorship made her the focus of the major information distribution centers. One result was that, by the time the journalist was extremely famous, President Obama himself answered a list of questions for him that appeared on her blog.

That could have happened to other notable bloggers inside Cuba — Claudia Cadelo, Iván García, Luis Cine, among other good writers — but it was Yoani on whom international public opinion concentrated, aware of the harassment and mistreatment by the regime.

Throughout that never-ending tyranny, Huber Matos, Armando Valladares, Eloy Gutiérrez Menoyo, Gustavo Arcos, Ricardo Bofill, María Elena Cruz Varela, Reinaldo Arenas, Marta Beatriz Roque, Laura Pollán, Raúl Rivero, Oswaldo Payá, now his daughter Rosa María, and other brave Cubans have found a platform and sounding board for their denunciations as a result of the abuse to which they were subjected.

If the first time that Yoani Sánchez received an invitation and a visa to travel abroad, the dictatorship had allowed her to exercise her right to leave and reenter the country freely, she would not have gained the huge celebrity and weight she now enjoys.

Why didn’t the government do it? Because of a mixture of arrogance and stupidity. Because it believed that it could crush people without any consequences.

Fortunately, that’s not true. The people’s voice is the strong voice of the weak. “A just principle from the bottom of a cave is more powerful than an army,” José Martí wrote.