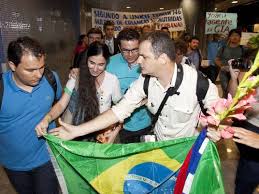 The story of a conspiracy of the Cuban ambassador in Brasilia, far from harming the Cuban blogger, amplified her importance and prominence in Brazil

Dado Galvão, Brazilian documentary filmmaker and director of the documentary Cuba Honduras Connection, where Yoani Sanchez is interviewed as part of the plot of the film–whose basic theme could be summarized as “no authoritarian governments of the right (Honduras), nor dictatorships of the left ( Cuba)”–invited Yoani to appear in Brazil on two separate occasions to attend the Premier of his documentary. The first event was frustrated by the Castro regime’s refusal to let Yoani leave the country, and on the second try, when Yoani was again not allowed to travel, only the Honduran journalist who interviewed Yoani in the documentary was able to attend. Galvão then promised Yoani to help her come to Brazil.

When it was announced that on January 14, 2013 the Cuban dictatorship would begin to apply its “immigration reform,” Galvão contacted me personally to start a movement in Brazil among Cuban residents and Brazilian democrats, to bring Yoani Sánchez to Brazil. The first activity was to organize a fundraiser to buy the plane ticket that would bring the blogger to Brazil. Many Cubans and Brazilians donated their money to such a cause, until a group of Brazilians in the city of “Feria de Santana” in the state of Bahia, took it on as their responsibility, bought the ticket, and traveled to Cuba to deliver it personally to Yoani, along with the letter of invitation from Galvão so she could get an entry visa to Brazil.

In parallel with Cuban-Brazilian efforts to bring Yoani to Brazil, the Cuban embassy in Brasilia began preparing a document of over 230 pages (in Brazil it is called a “dossier”) full of slander and crude photo-montages about the blogger. The theses contained in the “dossier” were that Yoani “liked capitalism and money” for three reasons: first, “eating bananas”; second, “drinking beer from a can,”; third, “going to the beach.” These three supposed tastes of the blogger were illustrated with photos of Yoani buying bananas, sitting in a chair on the beach basking in the sun, and at a table with cans of beer. This crude official accusation against Yoani, put forward by a country where these activities are the privileges of tourists, dismantled from the beginning the negative impact against the Cuban blogger in Brazil, a country where even the poorest “drink beer, eat bananas, and go to the beach.”

But there was more. The Cuban ambassador with his characteristic arrogance called a meeting in the Cuban embassy in Brasilia with members of the Labor Party (PT) and other leftist parties, to organize and finance the attack on the Cuban blogger on social networks and to prepare “acts of repudiation” during her visit, with slogans provided by the embassy itself. In this meeting–meddling in Brazil’s internal affairs–there was also an official who works directly for the president of the Republic, such was the depth of the conspiracy against the visit to the country of “one of the ten most influential intellectuals of Latin America,” according to Foreign Policy Magazine, which should fill the Castro regime with shame.

The trip and the initial reception of Yoani Sánchez in Recife

The filmmaker Dado Galvão, in coordination with me, had prepared a program of activities for Yoani in Brazil that had, as its first activity, a simple reception at the Recife airport, in the capital of the Brazilian state of Pernambuco, by a commission composed of the director himself, a representative of the group “Feria de Santana,” and me, a time when Yoani would be presented to the Brazilian press, and we would coordinate with the blogger the details of the trip, which included her immediate travel from Recife–the location of her initial reception in Brazil–to the city of Salvador, capital of the Brazilian state of Bahia, which includes the city of “Feria de Santana” where there would be a two-day program with the Cuban blogger.

I arrived in Recife on Sunday, February 17, from the city of Belem, capital of the Brazilian state of Para, to be present when Yoani arrived. Moments before leaving, I received a call from Galvão telling me that the largest Brazilian weekly magazine, VEJA, was about to publish, in its Saturday, February 16th edition, everything about a conspiracy of the Cuban ambassador in Brasilia which the magazine had obtained from one of the militants invited to the meeting, including the “dossier” against Yoani, and so blowing up the scandal to national proportions, which far from harming the Cuban blogger, amplified and highlighted her importance in Brazil, as was later proved. They were “hoist on their own petard.”

Before traveling to Recife I bought the magazine and on my trip I read the details of the “dossier,” which had the three photos of Yoani, mentioned above, as “proof” of her “taste for capitalism” (bananas, beer and the beach). The report was full of heavy accusations against the Brazilian authorities for authorizing a high official of the President of the Republic to attend, in the name of the government, to a meeting impossible to conceive of in a free country like Brazil. What I read astounded me, because in reality the preparations for the trip on my and Galvão’s parts had not included anything regarding the safety in Brazil of the peaceful and frail Cuban blogger.

On arriving at the airport in Recife, the first thing I did was to meet with the head of airport security, with the idea of pointing out the seriousness of what was published in VEJA against the Cuban blogger, who I had come to meet and had brought to this place in Brazil. The reason for this contact was to ask for authorization from the local authorities to contact Yoani before she left the international area of the airport and to communicate the facts narrated in the magazine, with two objectives: first to prepare her for a hostile reception paid for by the Cuban embassy, and second, to suggest she not offer opinions about the participation of the president in the embassy conspiracy, as long as we didn’t have more details with respect to it, thus avoiding a confrontation with the government from the very beginning.

I was professionally and excellently treated by airport security, but the international reception area is not under the control of this institution, which told me I would have to go to Federal Revenue (who collect the taxes on things coming in to the country), or to the Federal Police, in charge of operating the Brazilian customs. With this information I decided to go to the Federal Police where I communicated the problem presented by what was published in VEJA and the potential negative reception, for which we were not prepared. The official was very receptive to my request and promised to strengthen security at the time Yoani’s plane arrived (Monday morning, February 18, at 12:30 AM) but there was no chance of me being allowed into the international area under their control, for security reasons.

From the Federal Police I went to the desk of the airline that was bringing Yoani to Brazil, the Panamanian company COPA. A senior official of the company treated me with great courtesy, but had no authority to authorize me to enter the international area to speak with Yoani before she left the area. As she emerged, Yoani would certainly have many journalists as well as demonstrators paid for by the Cuban embassy. However, the COPA official offered me a solution: he would intercept Yoani in the jetway coming off the plane, before the border, and call my cell phone from his cell phone and put Yoani on to speak to me, which seemed a good solution in these complex circumstances and this was what I did.

As Yoani appeared at the exit door of the international area, there was already a battalion of some 30 photographers and Brazilian and international press along with a group of some 20 demonstrators paid by the Cuban embassy. As the blogger emerged we had coordinated that she would first be embraced by Galvão and then by me. Initially, Galvão’s hug took place without the protestors having identified the figure of Yoani, too frail for their minds to assimilate that she was the woman who created a “crisis” for the “Commander” in Havana. It was during my hug that the screaming began, as well as the deployment of the posters directed by the Cuban ambassador. The slogans were in Spanish and from the early days of the Revolution, such as “Cuba yes, Yankees no,” and “Down with the worms,” which greatly increased the sympathy for Yoani, who immediately identified the origin of the “protest.”

As we had planned ahead of time, we crossed the international departure area toward the VIP lounge offered by the airport authorities. The journalists asked Yoani some questions and the the camera flashes lit up the environment with uninterrupted clarity. Yoani walked down the corridor, followed by the journalists while the demonstrators tried to reach her with their posters, but Yoani was flanked by Galvão and one of the organizers of her activities in “Feria de Santana,” while I positioned myself at her back, to deter any attempt, which fortunately did not occur.

Once inside the VIP lounge, the demonstration was dispersed outside and Yoani was received within the lounge by the airport workers present, all hugging her and wanting pictures taken with her, apologizing for the insults against her “from a small group unsuited to democracy” they said, “who don’t represent the hospitality of the Brazilian people.” Yoani gave her first interviews there (at three in the morning) saying that “the demonstrations don’t leave a bad impression, because in a democracy you have to expect things like this.” That “the only thing I feel is that in Cuba there wouldn’t be things like this with visitors, because the Cuban repression would end the protests in two minutes.”

The warm reception of the simple Brazilians in the airport, airline officials, police, janitors, photographers and journalists, gave me the first clue about what would be repeated throughout the whole trip. A little group of “militants” paid by the Cuban embassy were the only Brazilians who greeted Yoani aggressively in Brazil. Yoani Sanchez, as she walked the streets and plazas of the country from that point forward, was always received with signs of affection, respect, curiosity and an admiration more like that accorded a “pop star” (as the Brazilian press calls her) than a blogger. Everyone admired her and was surprised that a person so fragile–and a woman–was the one who created a total crisis for the “Cuban Commander.” 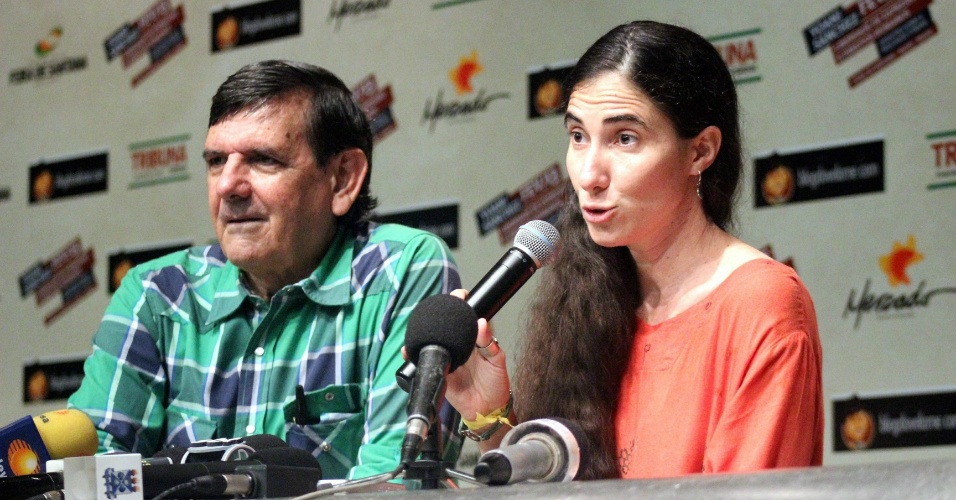 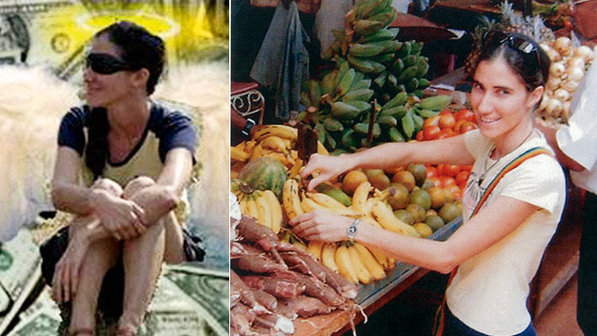 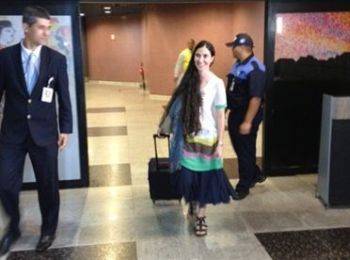 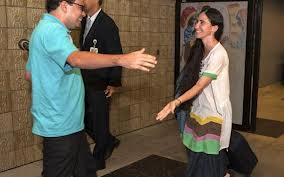 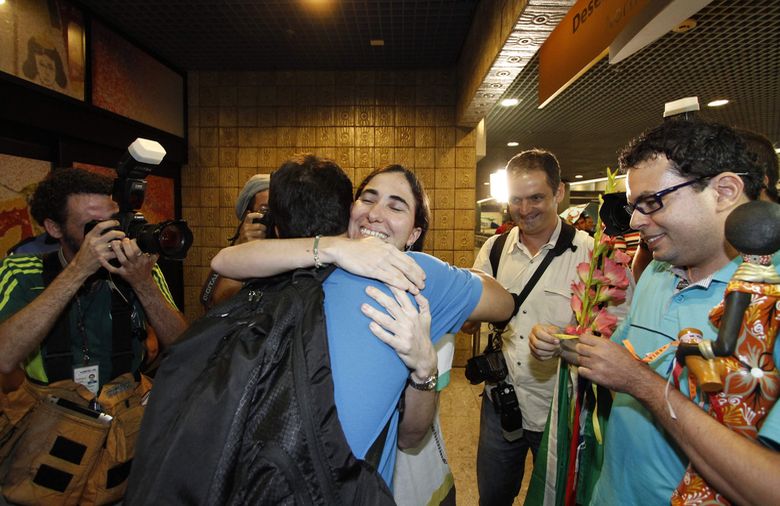 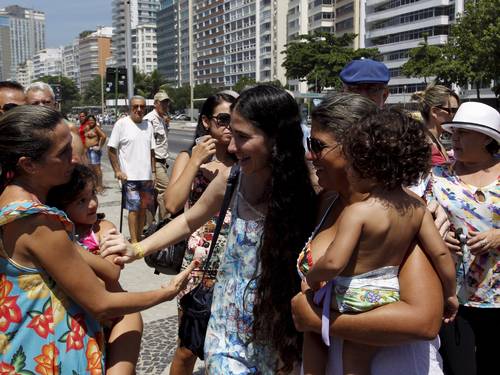 Photos and images taken from GOOGLE.COM.BR