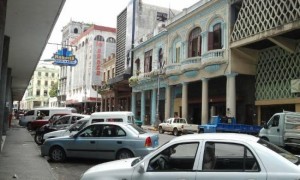 HAVANA, Cuba, November www.cubanet.org – The Cuban government’s recent ruling outlawing the sale of imported clothing and shoes, as well as private rooms exhibiting 3D films and offering video games, will not cause mass protests or anything like it.

The 20,000 people who dedicated themselves to this business will comply with the measure, grumbling or silently, but without confrontations that complicate their lives. That is the mentality that is imposed by the fear of beatings, confiscations or prison, depending on how one defies the order that will come into force on January 1, 2014.

The work of the political police and other agencies responsible for repression is not the same as 20 years ago, but obviously it still remains effective.

Organizing themselves to stage a massive public protest in response to what lies ahead is unthinkable. Most are convinced that it is best to abide by the resolution and seek alternatives.

“I will continue selling. The issue is to adapt to the circumstances. We will have to take more care. At first they will be rigorous, but over time it will decrease. It’s always been that way. They do not realize that absurd prohibitions generate greater lack of control,” said a young woman who just over a year opened a small boutique with the help of her sister based in France.

“I’m not looking for problems. What am I going to do? Even though you’re against it, they’re going to impose it. You can imagine, they have the power,” said Fernando, a resident in the Havana municipality of Plaza, who set up a video game room just 8 months ago.

Although there are overflowing reasons to protest, in the end fear prevails. A popular revolt to throw off the yoke of the dictatorship does not seem likely in Cuba. The regime aborts every attempt in this direction. And so the average Cuban prefers to take refuge in the black market, or temporarily or permanently leave the country.

To openly oppose the government remains a minority thing. The fate of the political prisoners, the recurring beatings of the Ladies in White in the public street, and the acts of vandalism against the most belligerent opponents, pass under the radar among a population that doesn’t hide its fear and opts for the double standard.

The sad reality forces them to be skeptical or pessimistic, when speaking of the end of this government.